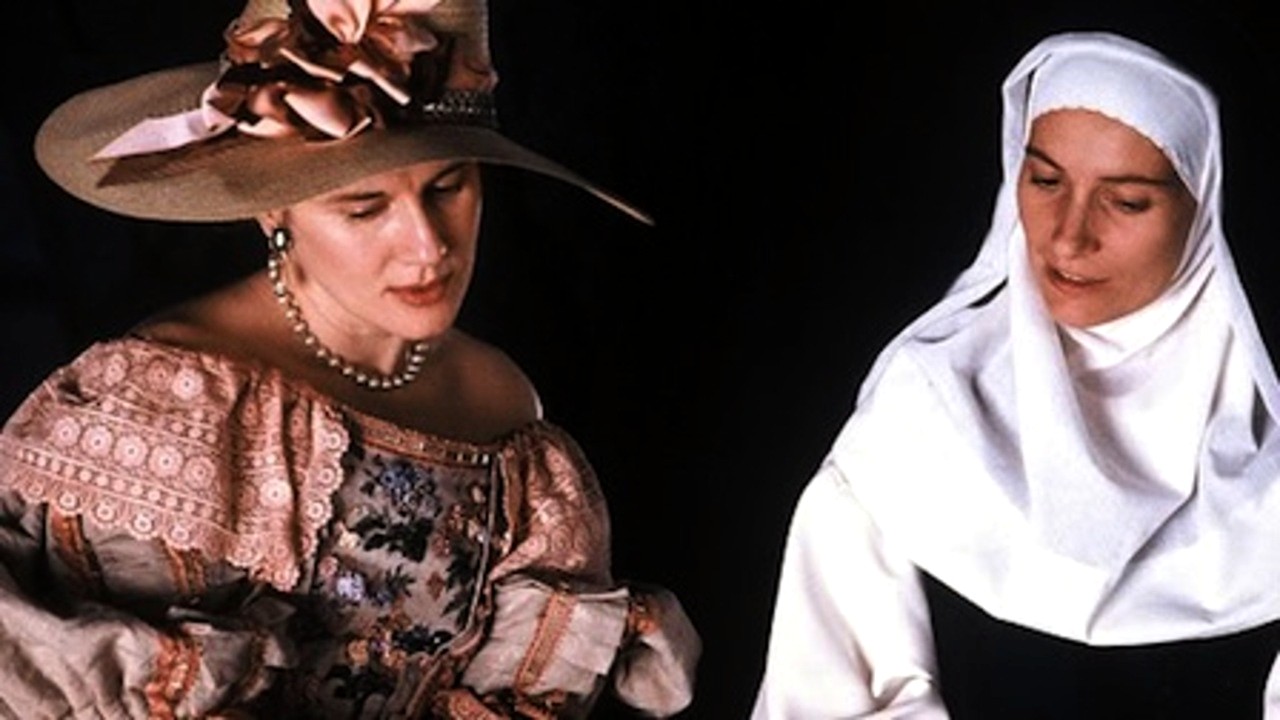 Now as they went on their way, he entered a certain village, where a woman named Martha welcomed him into her home.  She had a sister named Mary, who sat at the Lord’s feet and listened to what he was saying. But Martha was distracted by her many tasks; so she came to him and asked, “Lord, do you not care that my sister has left me to do all the work by myself? Tell her then to help me.”  But the Lord answered her, “Martha, Martha, you are worried and distracted by many things; 42 there is need of only one thing. Mary has chosen the better part, which will not be taken away from her.”

Thanks to someone on YouTube, Argentinean director Maria Luisa Bemberg brings to us gringos the enlightening biographical film of one of Mexico’s early and still read poets, the 17th century nun Sor Juana Inés de la Cruz (1651-1695). It is a beautifully costumed and acted historical drama about a woman still very relevant on a universal basis—she was the first writer in the Americas to defend the rights of women. Also, her besieged (by the church authorities) life ended when she succumbed to the plague while nursing her fellow nuns.

When I first saw the cover of the Spanish version of the film, I wondered about the tall, blue-plumed crown placed over her nun’s head covering. As the film unfolded, this was explained, as well as the great impact this talented woman had on her times–and continues today through her poetry and plays. She reminds me, in her struggle against the misogyny of the Church’s hierarchy, of a better known medieval nun, beautifully chronicled in the film Vision, Mother Hildegard von Bingen. However, the latter rose to great power in the church, whereas Sister Juana (Assumpta Serna) rejected such an opportunity, and thus had no power when the conservative Archbishop of Mexico (Lautario Murua) mounts a campaign against her.

As we see in a flashback well into the film, Sister Juana had been sired out of wedlock by a Spaniard and a creole mother, grew to become a prodigal child, learning to read Latin by the time she was three.  Desiring to become a scholar a few years later, she dressed like a man hoping to attend university classes, a move opposed by her mother. She did attain great learning from her grandfather’s books and, at the age of 16, while a lady-in-waiting at the viceroy’s court, passed with flying colors an examination by a room full of clerics and scholars assembled to test her. Not shown in the movie is the fact that they granted her the equivalent of a university degree! Uninterested in marrying and being imprisoned by the drudgery of a housewife, in 1617 she entered the Convent of the Order of St. Jérôme where the kindly Mother Superior gave her permission to pursue her writing interests, both in poetry and drama. She became so well known and respected that admirers had given her so many books, including heretical ones by Luther, that it was said she had the largest library in the country.

When in 1680 the newly arrived Viceroy of Spain Marqués de la Laguna (Hector Alterio) and his wife the Vicereine Countess Maria Luisa de Paredes (Dominique Sanda) are watching one of her plays, they both admire her artistry. Sadly, the Archbishop, sitting close by them, is disgusted by its light approach to sex, murmuring that the convent is becoming a whore house. The Spanish  pair become frequent visitors, conversing through a tall iron-barred partition.

The Vicereine often visits alone, she finding a kindred spirit in her talented friend, both agreeing that the treatment of women by men is deplorable. It is she who gives to Sor Juana the unusual blue-feathered crown as a mark of respect and admiration. It is a very costly gift, the feathers being from a  resplendent quetzal, hardly the kind of gift one would present to a cloistered nun! Sor Juana is deeply touched, her affection for her visitor growing with each visit. Pulling rank, the Vicereine soon leaves the parlor with its iron barrier so she converses more intimately with her friend in the nun’s quarters. With its ceiling high bookshelves filled with precious tomes and various scientific instruments, the small apartment is definitely not like those of the other nuns. In such privacy, the women’s conversation becomes more personal, and we can see that it is more than just their shared love of knowledge that attracts them. This is especially evident in the scene wherein the Vicereine tells the nun to remove her headgear so she can see and stroke her hair. Sor Juana during this period writes a number of love poems, some of which she dedicates to her patron.

Although most of the nuns admire Sor Juana, others are jealous, as well as upset by her unorthodox beliefs and morals. The Archbishop is fearful of what he sees as the moral and theological laxity back in Europe spreading to his country too. The prelate begins to reign in Sor Juana but is opposed strongly by the Viceroy. The two openly clash. As long as Sor Juana has such a powerful protector she is safe. Not thinking ahead, she rejects the offer of her aged Abbess and other supporters that she stand for the post in the next election. Her reason for turning down the opportunity, of course, is that she would have no further time for study and writing.

The sad day does come when the Viceroy and his wife are recalled to Spain, and the Archbishop is now free to increase his long simmering campaign against his nemesis. In 1690 the supposedly friendly bishop of Puebla invites Sor Juana to write a letter attacking an older writing by a Jesuit priest, which she gladly does. He breaks his promise not to publish it, and so the Archbishop now has the small book as grounds for bringing charges against her. Even her confessor turns against her. The tribunal berate her for writings and force her to sign a confession recanting her teaching that women have minds equal to that of men and should be free to study theology and science. The film’s title comes from a line in this document that she signs in her blood, “I, the worst of all.” This persecution sequence and the plague that hits the city and the convent are briefly dealt with.

Although many of Sor Juana’s works were lost, a large number have survived, thanks to the efforts of the Viceroy and Vicereine to whom she entrusted copies of some of her works when they were getting ready to return to Spain. You can find several of her collections for sale on Amazon Books. I’ll quote just the first few lines of one of her most famous poems, called “Foolish Men” or, in a different translation, “You Men,” to demonstrate how she refused to fit into her society’s mold—I think Jane Austin would have loved her if she had known about the nun’s writings of a century before her own:

Silly, you men – so very adept at wrongly faulting       womankind,

not seeing you’re alone to blame for faults you plant in woman’s mind.

After you’ve won by urgent plea the right to tarnish her good name,

you still expect her to behave— you, that coaxed her into shame.

The condemnation of male hypocrisy—men seek sex outside of marriage but insist on marrying virgins—builds throughout its 17 stanzas, sometimes with a touch of humor:

It’s your persistent entreaties
that change her from timid to bold.
Having made her thereby naughty,
you would have her good as gold.

If you are like me, ignorant of this marvelous woman, you will want to see this film, and then go on to read the many poems that are available on the Internet, and even more in the books available at Amazon. The cast is excellent, as is its director, appropriately a woman. Just click on YouTube, and it’s available free!

The true story of the 17th century Mexican poet/nun Sor Juana Inés de la Cruz who ran afoul of the archbishop because of her writings championing the rights of women & popular plays regarded as too sexual.
Editor Rating ★★★★★5 out of 5
More Details