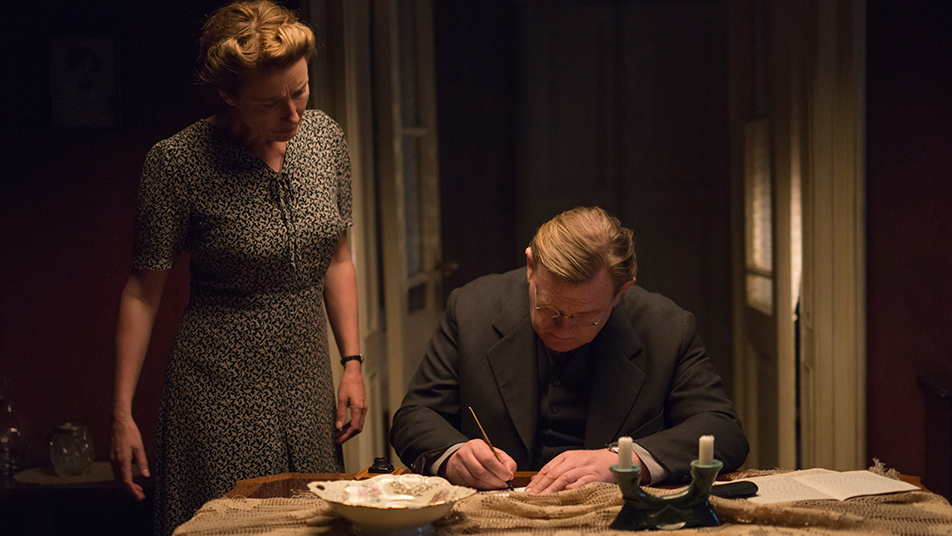 Even when I cry out, ‘Violence!’ I am not answered; I call aloud, but there is no justice.

Most WW 2 era films about resistance to Nazi tyranny are set in France, Poland, or some other occupied country, so Vincent Perez’s story of a middle-aged German couple becoming disillusioned with Hitler is most welcome. I can think of just a hand-full of similar films—Terrence Malick’s A Hidden Life; Marc Rothemund’s Sophie Scholl: The Final Days; and Michael Verhoeven”s The White Rose are the three that spring readily to mind. Based on Hans Fallada’s novel Jeder stirbt für sich allein” (Every Man Dies Alone), it is a fictionalized version of what happened to the real-life Otto and Elise Hampel.

At the beginning of the film, set in France in 1940, a young German soldier Hans Quangel (Louis Hofmann) runs through a wood. A shot rings out, and he falls dead as a firefight breaks out between the French and the invading Nazis. Back in Berlin Hans’ father Otto (Brendan Gleeson) is a foreman supervising worker building wooden coffins. At his home the female postal worker delivers a letter informing him and his wife Anna (Emma Thompson) that Hans has been killed in action. Apparently reflecting their already strained relationship, the grief-stricken Anna cries out that Otto has gotten their son killed. Otto, now seeing the results of the war policy of the man he had once supported, feels it is Hitler who “murdered” their son. At his factory, following a pep talk by a Nazi functionary trying to whip up workers’ enthusiasm to increase production, Otto finds his fellow workers reacting hostilely to his criticisms. To charges that he has not given to Nazi causes, he silences them with his response, I gave my son to Germany.”

He begins to write in disguised German print a series of postcards denouncing Hitler and his lies. Often using the phrase “Frei Presse” he writes such anti-Hitler messages as “ Kill Hitler!” “Stop the War Machine.” One by one, he leaves them on steps and other places around his area of Berlin. Anna at first is fearful and skeptical, but also becoming disillusioned with the regime, demands that she be allowed to go with him. At one point he tells her, “So we begin. From now on, we are alone.” During one intense sequence it is good that she does participate, because when a suspicious janitor who has seen Otto deposit one of his card follows him, Anna watching from outside the building, intercepts the pursuer, pretending to need directions.

In their apartment building we see that other Berliners also have not joined the masses in idolizing Hitler. Several are sympathetic to the elderly Frau Rosenthal whose husband has disappeared into one of the concentration camps. When thugs living in the squalor of the building’s basement break into her apartment intent on looting it, she manages to escape. Herr Fromm (Joachim Bissmeier), a respected and widowed judge, offers her refuge, telling her that she can stay in the room of his deceased daughter. He dashes her illusion that her husband will return, but also says, “I have a mistress whom I obey. Her name is justice.” Unfortunately, the thug has seen the woman taken in, so when the Gestapo show up at the building, her fate is sealed. The other citizen obviously sympathetic to the old woman is the woman postal worker whom we first see delivering to the Quangels the sad news about their son. Sympathetic to Frau Rosenthal, she is shocked by her fate, though she dare not express any of her views to anyone.

The parallel story to that of the Quangels is that of the Police Detective Escherich (Daniel Brühl) who methodically places a pen with a small red flag on his large wall map of Berlin for every spot where a card is found. Intent on discovering a pattern and possible home of the man the SS regard as a traitor, he is convinced he will capture his quarry when he makes a mistake. Because Otto always wears gloves while handling the cards, there are never fingerprints. However, from the description from the janitor who chased him, the detective does have a crude drawing of the writer’s face. The policeman also has figured out that the perpetrator, whom he dubs “the Hobgoblin,” uses two specific streetcar lines to move about the city. Days pass into weeks, months, into years, and his map looks red in one large area. Most of the more than 200 cards left around the city are being turned in!

The SS is not satisfied with Escherich’s slow process, so they increase pressure upon the policeman, humiliating him in the presence of others. He is concerned for proper justice procedures, and so when his assistant arrests an obviously innocent man, he lets him go. One of the SS officers, whose concern is that an arrest not justice be done, punches the policeman in the face. When the bleeding Escherich falls to the floor he is ordered not to shed blood “on my floor!” Forced to go out and rearrest the man, Escherich does track him down, and in one of the saddest scenes in the film, offers up his soul for the sake of his career. The ultimate price he pays for this because his reading of Otto and Anna’s cards have affected him adds to the tragedy of the story.

Throughout the suspenseful film we feel the futility of Otto and Anna’s personal rebellion against the tyrannical power of Hitler. Their weapon of small postcards against the dozens of police and SS agents with their guns and authority to arrest and lay charges t hat will lead to their execution? About three years into their campaign Otto, wanting to know more about the effect of his cards, has the following exchange with his wife:

Otto Quangel: What do you think happens to our cards?

Anna Quangel: Why do you want to know?

Otto Quangel: I want to know how people react.

Anna Quangel: Some people will be afraid, probably. Afraid that someone may have watched them pick up the card. Some will, maybe, put them back. Some people will turn them in to a policeman… but, our cards will also be read by them too.

Otto Quangel: Its like with a machine. A little sand in the gears will not stop the machine. But, if a person throws a little more sand and then more, the motor begins to stutter. The assembly line stops. In my mind, I see lots of people throwing sand into the gears.

Anna Quangel: Ya, that too.*

When Escherich finally catches up and arrests Otto, the latter tries to convince him that Anna is innocent, but the Nazis will have none of this. Both are charged and brought to trial. To his credit, Herr Fromm attends the trial, the fleeting moment he and Otto exchanging knowing glances speaks volumes. Otto is humiliated by his treatment by the Nazis in a scene in which the tortured prisoner is kneeling and the SS and detective drink a toast over him touting their victory. The Nazis dash their shot glasses against the top of their captive’s head, inflicting further bleeding. Escherich, obviously not liking this, hesitates, but then overcomes his feelings and hurls his glass at Otto’s head.

Otto’s interrogation by Escherich reminds me a little of that of Austrian conscientious objector Franz Jägerstätter in Terrence Malick’s A Hidden Life. The Nazi in that film says that his refusing to salute Hitler and to enlist in the army accomplishes nothing, that, indeed, he will die and be forgotten. Escherich, learning that the Quangels had distributed about 285 cards, boasts that he has 267 of them, all turned in by citizens loyal to the regime. They had accomplished nothing by their treasonous acts.

This assertion, of course, is hard to dispute. Even if all of the 18 had been read, what good had they accomplished? And yet, if one could imagine the author of “On the Duty of Civil Disobedience” confronting Otto, I believe he would still say “Well done, good and faithful servant.” In the face of overwhelming evil, one does what one can. This, and not success, is the basis for discerning the character of a person. Escherich tells Otto that he has read every one of the messages, and later we come to believe that they had more of a corrosive effect on him than he had realized—otherwise, why the twist of an ending?

At the end credits the dedication reads: “In memory of Otto and Elise Hampel guillotined for having written and circulated cards against the Nazi regime between 1940 and 1943.” I don’t know whether the real policeman did what Escherich did after the trial and executions, but if it is fiction, it shows that the filmmakers desire to show that we do live in a moral universe where righteous and unrighteous acts have consequences. This is a well directed  and acted film—Emma Thompson and Brendan Gleeson perfect in their performances. My one criticism is that I wish the script toward the end had shown a little more of the policeman’s inner turmoil caused by his reading the cards and his guilt over the arrest of an innocent man, perhaps a couple clips of him reading aloud (or Otto’s voice-over). This would have made plausible, and us prepared for, the plot twist at the conclusion of the film. Nonetheless, the film is a fitting tribute to an ordinary German couple who paid the ultimate price in opposing tyranny.

A working-class German couple during WW 2 write & distribute around Berlin almost 300 postcard denouncing Hitler and the war--and pay the penalty for their protest.
Editor Rating ★★★★★4.5 out of 5
More Details