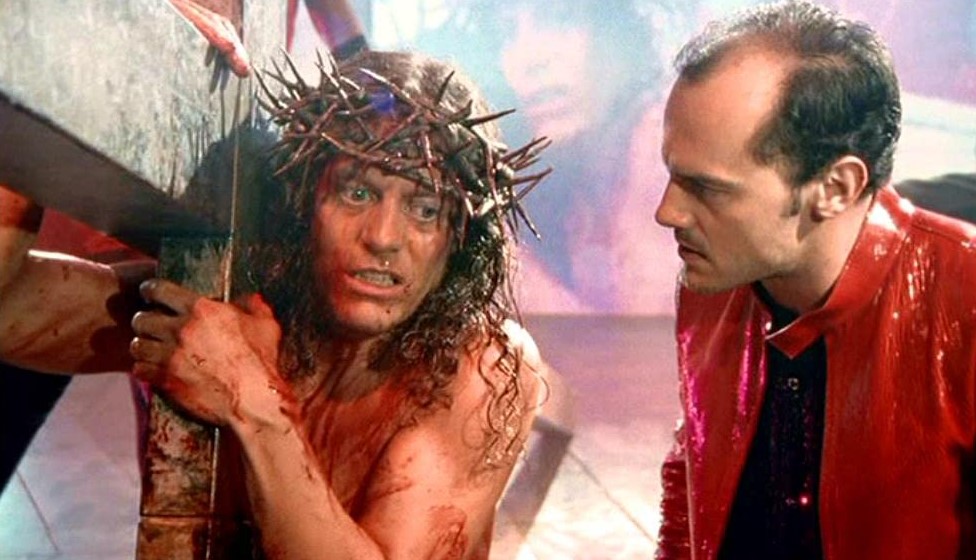 Director Gale Edwards and Nick Morris’s version is based on the 1996 London/2000 Broadway revivals of the show. It is a hybrid work in that although shot on a huge set if Pinewood Studios, its skillful editing makes it more than the filmed stage play that constitutes the third version that I will be reviewing in the next issue of this journal. There is no applause, no shots of an audience, because the camera is the only audience. There is less sense of place than in Jewison’s film, the massive set with its wide steps merely suggesting Jerusalem, the temple, and Golgotha.

There are far fewer long shots, the actors framed more in medium and close ups. Indeed, they are often in each other’s faces, the tension and outbursts of violence far greater than the first version. Judas (Jérôme Pradon) even shoves Jesus (Glenn Carter)to the ground during a shouting match between them at the Last Supper. We can see this coming because their emotions almost come to a boil when Jesus rebukes Judas so harshly for criticizing Mary Magdalene—this in front of the other disciples. We can see that the Betrayer’s emotions, his rage, are also an important part of his trying to force his Master’s hands by selling him out to their enemies.

From the very beginning the filmmakers try to connect more with the present during the Overture, the camera first framing a graffiti wall: “Hate” is printed boldly, then various slogans, even a “Jesus Loves Me.” As the camera continues to pan to the right we see various leather clad figures and soldiers chasing down a protestor. By the end of the overture the camera reveals a large hall with sets of towering columns and a wide set of steps. The leather-jacketed Judas could have stepped out of an early Marlon Brando movie as he sings of his disappointment in Jesus current behavior in which he and the crowd are talking of him as God. During this opening song Jesus and his Betrayer stand far closer to each other than in the previous film. As Judas warn that the Romans will “crush us,” The other disciples join Jesus, and he turns his attention to them rather than the man pleading with him for change. Singing “What’s the buzz,” the T-shirt and jeans-clad disciples would have been at home in West Side Story.

The hostility between Judas and Mary Magdalene (Renée Castle) also seems more intense, with Judas snatching Mary’s bottle of ointment from her during his protest. She soon snatches it back just as forcefully. Her closeness to Jesus’ face and frequent caressing of him is understandably scandalous. At one point she starts to kiss Jesus, but is stopped when Judas approaches. All this makes her plaintive “I Don’t Know How to Love Him” all the more powerful.

The priests, clad in black, meet in what looks like a board or situation room, worried about the impact of Jesus on the crowds. “He is dangerous,” in that if he should incite the mob to revolt, they would lose their place in the scheme of things, the Romans demanding that order be maintained at all cost. Later, when we see Pilate, he too is dressed in black with a large officer’s hat and a long black leather coat that a Gestapo agent would have felt at home in. A cascade of political flyers with Jesus’ picture upon them fall into and litter the table and floor of the room.

During Jesus triumphant entrance into Jerusalem, the crowd carrying large posters of Jesus, the Hosannah-singing crowd should “Hey JC, JC, you’re alright by me.” Jesus smiles, while Judas looks troubled. The smile vanishes when next the crowd yells, “Hey JC, JC, won’t you fight by me!” (Throughout the play we see men brandishing rifles and AKs, as we do here as well.) The disciple Simon Zealotes (Tony Vincent) takes center stage, pointing out that there are thousands “screaming love and more for you.” Assuring him that everyone would “do whatever you ask him to do,” Zealotes says to “add a touch of hate for Rome,” and Jesus would “rise to a greater power.” Borrowing from the Lord’s Prayer, he yells, “You’ll get the power and the glory/Forever and ever.” As the disciple’s Amens fade, Jesus calmly replies that none of them—not Simon, “nor the fifty thousands, nor the Romans, nor the Jews, nor Judas nor the Twelve, nor the priests, nor the Scribes, Nor doomed Jerusalem itself, understand what power is, understand what glory is…” This song is much quieter than what we have just heard from Judas and the crowd, making it all the more impactful. Ending with the enigmatic “To conquer death you only have to die,” it reveals a Jesus who, though he may display anguish and confusion about his role in “Gethsemane,” strongly oppose those yielding to hate and violence. From the first time I heard this sequence over 50 years ago I have cherished this musical as one filled with passion and enduring insight.

I would write more on the temple cleansing and trial scenes, but will hold off until reviewing the third DVD. I do want, though, to point out that I have upped the Violence score in the VP ratings from 4 to 6 because far more violence is on display here. The 1973 film was rated G despite the Crucifixion; this one is unrated, but would surely be PG-13, if not R. While Mary and Peter sing “Could We start Again, Please?” quick shots of Jesus being abused are interspersed. Judas, attired in a shiny red leather jacket, does not sing the show’s signature song just with a troupe of scantily white clothed angels, but draws close to the cross-bearing Jesus who is bloodied and wearing a crown of thorns. He even perches atop the cross and taunts Jesus with a small Bible. On a huge TV screen there is a close up of Jesus hanging on his cross. And earlier, Pilate’s hands are covered with Jesus’ blood when he lifts up the fallen Jesus whose body has been wracked by 39 lashes.

By the anachronistic use of gun-toting soldiers and cruel enemies dressed like gangsters or Fascists, the filmmakers give us a Jesus joined closely to the thousands of brave souls martyred by ruthless tyrants whose only purpose is to retain power. From Caesar down through Hitler, Stalin, and Putin, none of these ruthless men “ever understand what power is, understand what glory is, understand at all.”

No discussion questions until I have time to write about the 3rd DVD –the Live Arena Tour—in the next issue of VP.

A musical retelling of Christ's Passion from the viewpoint of Judas that has more anachronisms than the 1973 version--and more energy.
Editor Rating ★★★★★5 out of 5
More Details