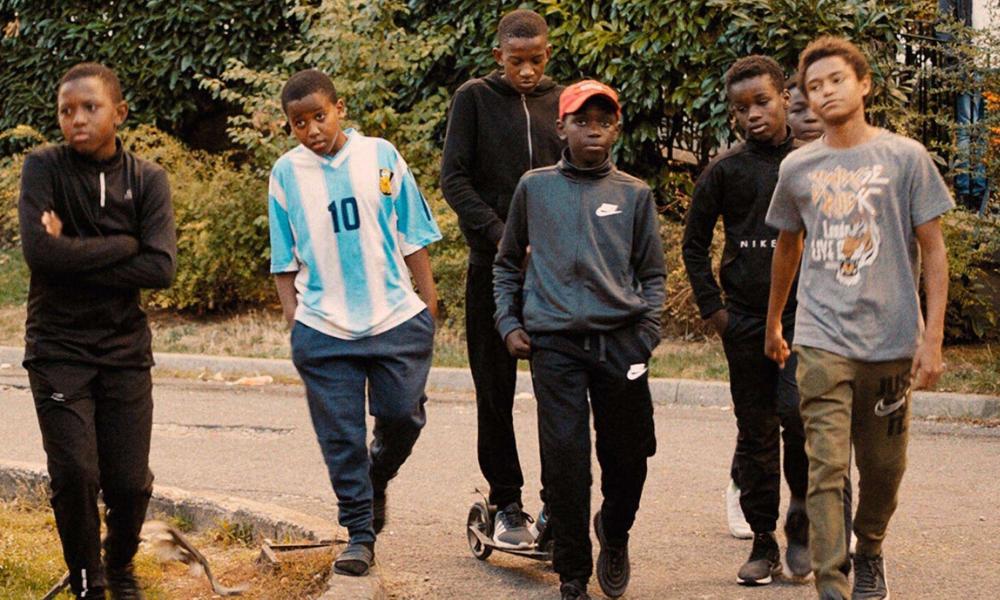 Their mouths are filled with cursing and deceit and oppression; under their tongues are mischief and iniquity.


Thus says the Lord: Act with justice and righteousness, and deliver from the hand of the oppressor anyone who has been robbed. And do no wrong or violence to the alien, the orphan, and the widow, or shed innocent blood in this place.

Nominated for a Best Foreign Language Oscar, French-African director Ladj Ly’s Les Misérables takes place east of Paris where most of the residents are Muslims living in high rises in the banlieue of Montfermeil. In his opening shots he stresses French unity by showing how in the summer of 2018 black teenagers jumped turnstiles to take a train into the city where they joined the huge crowds cheering the return of the French athletes who had won the World Cup over Croatia. Everyone is united at the Arc de Triomphe celebrating their great national victory. This prelude ends with the title that begins the stark contrast that darkens the rest of the story. Those black teens are from Montfermeil where we soon see that the police pledged to protect them are their oppressors, and the joy of victory, such as they have just shared with their white fellow countrymen, is short lived.

Stéphane Ruiz (Damien Bonnard) is the new member of the Anti-Crime Brigade just transferred in from the boondocks in Normandy because he wants to live closer to his son who is in the custody of his ex-wife. Introduced to veteran squad leader Chris (Alexis Manenti), aka “the Pink Pig, and African-French cop Gwada (Djebril Zonga), he is given the cursory welcome by the station’s female Captain and told (or warned) that he must get along with his fellow cops.“No solidarity, no team,” she says. As the three men, clad in scruffy civilian clothes, ride off in their squad car, Chris dubs the newbie in the back seat “Greaser” because of his slicked back hair. Ruiz quickly disapproves of his leader due to the brutal way Chris treats the residents. In one instance Chris spots some attractive Arab-French girls at a bus stop and orders Gwada to make a u turn. He enjoys the discomfort of the girls as he utters sexist remarks and tries to feel them up, one of the women telling him he has no right to do so. “I do what I want, “he tells her, declaring that he is the law. The episode ends on the ugly act of Chris smashing the cellphone of the girl making a video of him and her friend.

A near riot is about to erupt between a band of circus gypsies and drug boss Le Maire “Mayor” (Steve Tientcheu) and his men as the cops rush up to the group. Circus owner Zorro (Raymond Lopez), in a rage because a boy from the high rise has stolen his beloved lion cub, accuses Le Maire of stealing his pet. The cops are barely able to part the antagonists, promising they will find the pet and return it. The cops work under the pressure of Zorro’s threat to return with his armed followers if the cub isn’t returned to him by the end of the day. Chris assures Ruiz that he will soon know the culprit, declaring that the local youth are so stupid that they cannot resist boasting of their exploits on social media.

Meanwhile a boy named Buzz (Al-Hassan Ly, the director’s son) has been playing with his drone and gets into trouble with a woman whom he had photographed through her apartment window. We also see Issa (Issa Perica), the boy who has stolen the lion cub—and who, as Chris had predicted, has posted its picture on social media. Soon he is being chased by the three cops up and down stairways and through the streets. When he is cornered, his young friends arrive and start pelting the cops with rocks. Gwada brandishes his flare gun to keep their attackers at bay. To his surprise and horror he accidently shoots Issa in the face. The three cops whisk the injured boy into their car and drive off. To Ruiz’s consternation, it is not to an emergency room. Chris is much more concerned about the drone they had spotted above them, possibly recording the shooting. How to get it from its owner?

The pace of the action speeds up as Chris parks the injured Issa in a safe place while he pursues the matter of the drone and its video footage. Ruiz has tried to be the grown-up of the trio, managing to get to a pharmacy for medication for the boy’s face and to be a mediator between his belligerent partners and a local shop keeper and Iman named Salah (Almamy Kanouté) whose many young followers can help find the drone and its owner. He manages to control Chris’s excesses when he gains control of the memory board of the drone’s camera. There are other developments that escalate the next day into a fiery confrontation with gangs of boys so fed up with police brutality that an all-out war could spread throughout the area. And because the boy with the disfigured face is so angry, even the well-meaning Ruiz could become one of the casualties. The up in the air last scene will remind some of the ending of Spike Lee’s Do the Right Thing.

Ladj Ly wears well the mantle of Victor Hugo, having grown up himself in the tinder box setting of Montfermeil. His handheld camera catches many of the quotidian details of ghetto life: boys at times sitting around while observing everything; kids sliding down a hill on pieces of cast-off sheet metal; children cavorting in the water of a small pool and older boys shooting one another and passing cars with squirt guns; a group of women, interrupted by the cops looking for Issa, sitting at a table counting their money as part of a make-shift bank they have put together for each other’s benefit; a small group of Muslims talking with boys and trying to get them to come to their mosque. We also see many overhead shots of people and streets from the drone that soars above the tall apartment towers.

A trio of French cops search a Parisian slum for a stolen lion cub & the brutality of the leader sets off a rebellion by the abused boys.
Editor Rating ★★★★★5 out of 5
More Details