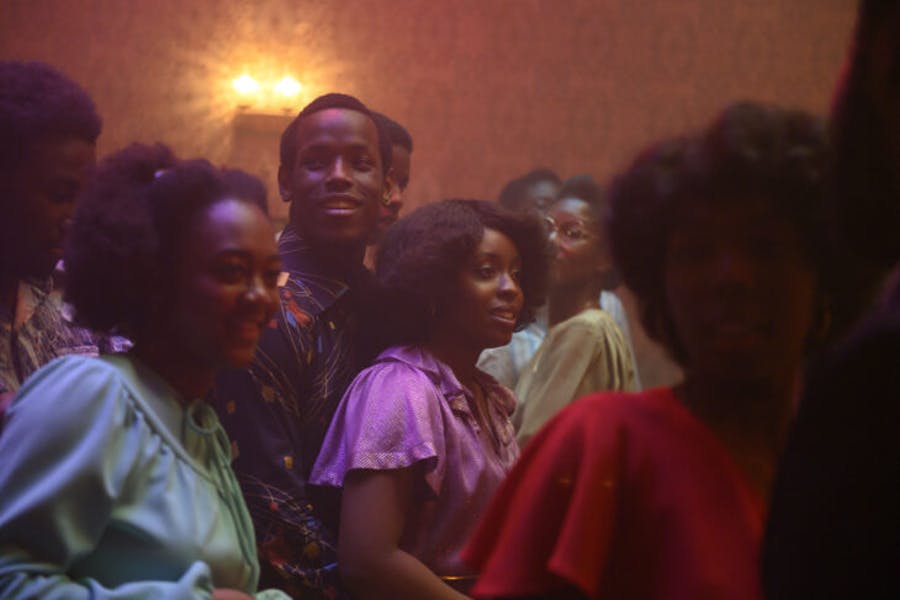 Steve McQueen’s second film of his Small Axe series, centering on a house party, might seem lighter than its other four films. Consisting only of West Jamaican Blacks, with whites seen only at a distance, all is well in the party, although outside we see racism embedded in a few white street loiterers—and the next morning our Romeo of the night definitely feels its force. But for the night, the lovers do rock to their beloved reggae music.

The slightly plotted story begins in the afternoon with the men in a London row house moving furniture, rolling back the carpets, and setting up their make-shift sound system and record player. Out in the kitchen the women gossip and hover over their pots and skillets as they cook up their spicy dishes to be sold that night. They break into a song that will repeated later at great length, Janet Kay’s “Silly Games.” Because most London clubs are closed to Blacks, they are setting up their own club for the night.

In her strict Christian home Martha (Amarah-Jae St Aubyn) dresses up and sneaks out of her second-story bedroom window, shimmying down the gutter pipe. Meeting up with her friend Patty (Shaniqua Okwok), the two brightly attired women ride the bus to the street where the party is at its beginning stage. A bodyguard takes their money at the door, admitting them to the gaiety inside. The first part of the party consists of the two sexes looking over and sizing each other up. Though the women at first dance together, this soon changes as the men make their moves toward the woman of their choice. Martha seems cautiously pleased with Franklyn (Michael Ward) as her partner, but Patty is less than enchanted with his friend Reggie (Francis Lovehall). She becomes so alienated that she walks out of the party. Martha starts after her, but stops when several young white men, watching the comings and goings whistle and advance toward her. They abruptly stop when the brawny door man rushes up to offer his protection

Back inside, Martha warms to Franklyn as they become better acquainted. The sexual heat is ramped up by the knowledgeable DJ who calls out each time he changes records. Everyone is mesmerized by “Silly Games,” gyrating their bodies and rubbing their torsos against each other. The camera moves about the room, providing many close-ups of the sexually arousing contacts between the dancers’ crotches. (Though there is no nudity in this film, I have placed a high number on the film’s sexual content rating.)

The record ends, but the women in the crowd keep dancing, singing the words a cappella for four more minutes before stopping, apparently reluctant to let go of its magical spell. Everyone knows the words of the 1979 hit, probably having sung them at home, as the kitchen women had done earlier. Now joining in together they sense and thus celebrate, their community, one in which a welcome is not dependent upon skin color.

Later the men have their moment when the DJ puts on the 1976 dub classic by a Jamaican group called The Revolutionaries, “Kunta Kinte.” Though strictly instrumental, the tune is named after Alex Haley’s Roots character. Its pulsating beat certainly shows its African roots as the men go into a martial arts stance and chop at the air with their hands. Alex Haley’s novel that awoke so many young Blacks to the glories of their history was a big hit in the UK as well as in the US. In the backyard some guests eat their plates of food. Some pair off and kiss. Martha, hearing someone cry out, comes upon a brute attempting to rape a woman, and he is driven off.

The night gaiety passes, and the next morning Martha and Franklyn are still together, he giving her a ride on the front of his bicycle. They stop at the garage where he works, obviously the two by mutual consent intending to consummate their relationship. However, something happens—I’ll leave it to you to discover—that quickly brings them back from their night of freedom into the harsh daylight where racism cannot be set aside. Franklyn might have been the winsome lover at night, but this morning he is just another “boy” at the beck and call of whites.

I was intrigued by the religious symbolism strewn through the film, some of which probably is intended to show us what Martha is rebelling against. At one point the camera pans from the cross on the wall of her room to the small replica of The Lord’s Prayer. As she and Patty are at the bus stop an old man carries a large white wooden cross on his shoulder, Similar to the pious pictures that depict Jesus carrying his cross on the way to Golgotha. Near the end of the film as Martha is returning home, the same man is unfolding the hinged cross, getting ready to carry it again. Reaching her home, Martha climbs back through her window. Without taking off her party dress, she lies down on her bed and pulls the covers over herself. Very soon her mother calls up to her that it is time for church. Martha is ready, already dressed for the weekly occasion.

McQueen’s film will delight both music lovers and social justice critics who appreciate subtlety in their films. In Mangrove, which reminded me a bit of Stonewall,  the 2015 film about the New York City gay rights riot, McQueen paid tribute to a group of outsiders rebelling after being pushed to the limits by brutal cops. The West Indians who dance away the night in this film have not yet come to the point of saying, “Enough is enough!” By placing this film amidst the four other films and naming the series after the weapon said by John the Baptist to be used in felling the trees of injustice, we know that they will come to this point. The women, so devoted to the song “Silly Games,” will come to see the lover addressed in the song as representative of the larger racist society and declare to it also, “I’ve got no time to play your silly games.” And the men who identified with the song and its African name sake “Kunta Kinte” will be out in the streets, directing their martial feelings toward their oppressors. In the meantime, let them rock away the night.

As indicated earlier, I am not sure of McQueen’s intent of his insertion of so much religious imagery, but I think people of faith will identify the man carrying the large cross with the white racism that they bear—thus even the color of that cross has significance. As a symbol of the unjust tyrannical rule of Rome, it applies also the racist London racists lurking outside the apartment and the police who drive by. The other four films include crucifixion, but three of them also have a glimmer of resurrection, once, as activist Altheia says in Mangrove, they reject the role of victim and start fighting back.

Shut out of white clubs, West Indians stage their own house party where Martha, sneaking out of her house, meets Franklyn for a night of dancing.
Editor Rating ★★★★★5 out of 5
More Details