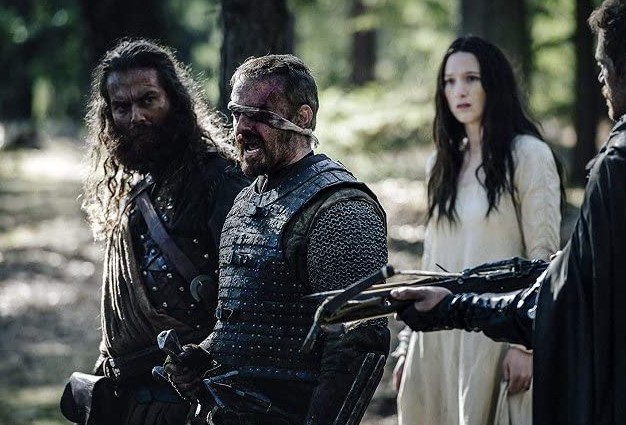 And what more should I say? For time would fail me to tell of Gideon, Barak, Samson, Jephthah, of David and Samuel and the prophets…

Czech director/writer Petr Jákl’s film focuses upon the early career of his nation’s hero Jan Žižka, regarded by many to be as great a military genius as any of the more famous generals. For some reason the makers of this bloody adventure film chose a generic title, maybe because so few people on this side of the Atlantic know much about Žižka. Indeed, even historians have been able to dig up few facts about the hero’s early life before he emerges as the leader of the Hussite forces in 1419, so the filmmaker could easily fabricate a story of romance, including a subtle love story and how he lost lost his eye, without distorting the history. (The latter is my favorite criticism of so-called historical films!)

Jan Žižka (Ben Foster), a Bohemian military leader whom Czech historians claim never lost a battle, becomes involved in the machinations of Wenceslaus IV, King of Bohemia, and the cruel nobleman Henry III of Rosenberg. The latter has murdered members of his family, so Žižka agrees to kidnap the fiance of Rosenberg, Catherine (Sophie Lowe). I suspect that she, like the nasty nobleman played by Michael Caine, Lord Boreš, is a fictitious person—though alleged to be the niece of the King of France, she is given just one name.

The ensuing complicated events show Catherine evolving from initial hostility to admiration and, eventually, love for her captor as she sees with her own eyes some of her intended husband’s atrocities committed against the peasants who oppose him. This reminds me of the old Robin Hood films in which Maid Marian moves from disapproval to love for the ace archer. Catherine is given the credit for saving Žižka’s life when he is wounded in the eye, a wound that will give him his nickname of “One Eye.” While the pair are hiding in a cave from their pursuers she places maggots in Žižka’s eye socket where they consume the flesh that otherwise would have become gangrenous. Obviously this is not a scene for the squeamish!

The film offers action lovers many battle scenes filled with blood and gore—this is also definitely not a family film. But it is a national tribute to the man who went on, after the events of this film, to lead a greatly outnumbered army of peasants against a horde of armored knights and, like Gideon of Biblical fame, defeat them. The star-crossed lovers’ tale might be fictional, but the unorthodox military tactics that Žižka uses to defeat superior forces are not. Lacking weapons, the peasants are taught to turn their farm implements into weapons of war, especially their flails, first used to thresh grain, but which could also wreak a lot of damage when used against an armored knight. Žižka turned farm wagons into what some have called the forerunners of tanks by mounting on them moveable walls for shields and loading them with up to 20 soldiers armed with crossbows, spears and such. They could easily be grouped together for defense and then quickly pulled forward by horses for attack.

The Hussite War that Jan Žižka led so successively on behalf of the Hussites was a religious war in which the Catholic Church tried to stamp out the work of the reformer Jan Huss—this after the events of the movie. In the film we do catch a glimpse of the great reformer (played by (Viktor Kristof)) and hear a portion of his sermon in the scene right before Catherine’s abduction. She is among the congregation, standing because there were no pews or seats provided in those days. Žižka is also present, though his attention is more focused on her than the preacher. It is too bad that the filmmakers do not delve into his faith and future support of the Hussite cause. (Jan Hus himself would be condemned and executed by fire in 1415, refusing to recant to the very end.) It might be because that story has already been told in Otakar Vávra’s “Hussite Revolutionary Trilogy—1954-1957” that Petr Jákl ends his film where it does. Jákl seems more interested in giving us an adventure film than a biographical one.* Nevertheless, what he has produced will be of interest, both to history lovers and fans of medieval adventures.

*As far as I can discover, Otakar Vávra’s films are not available, but there is a documentary that is, distributed by Vision Video as a part of their delightful Church History series. You can find it by clicking onto the title Blind Courage: The Unique Genius of Jan Zizka.

Fictional story of how Czech national hero Jan Zizka during his early years as a bandit & mercenary lost his eye & fell in love.
Editor Rating ★★★★★4 out of 5
More Details