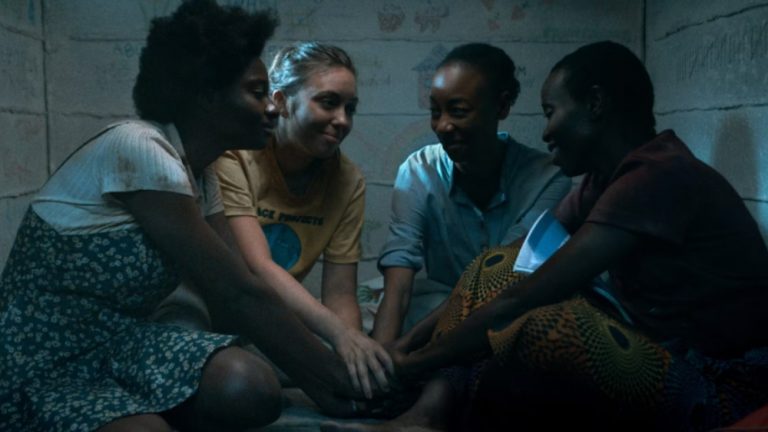 How long, O Lord, will you look on?
Rescue me from their ravages,
my life from the lions!
Then I will thank you in the great congregation;
in the mighty throng I will praise you.

Do not let my treacherous enemies rejoice over me
or those who hate me without cause wink the eye.
For they do not speak peace,
but they conceive deceitful words
against those who are quiet in the land.

Director/writer Alanna Brown’s harrowing film centers on four women who hide from the rampaging Hutus during the Rwandan genocide. Locked in to a 5 x 5’ food storage space beneath the kitchen, with just a small window to the outside world, the women must come to terms with themselves and their mutual animosity, as well as depend on the husband of one of them to bring food and help. He promises to return with food and UN help within a day, a promise that becomes impossible to keep.

Brown keeps her focus narrow, giving no exposition on the background or causes of the horrible slaughter, although one character does blame their former colonizer Belgium for playing the Tutsis against the Hutus.

The pregnant Annick (Elliane Umuhire) is the owner of the house in which the other three are given sanctuary. She and her husband are moderate Hutus, her husband Francois (Tongayi Chirisa) a teacher of both Tutsi and Hutu children. She has miscarried several times before, so their hope for a healthy child raised in a safe environment means much to the couple.

Jeannette is a nun (Charmaine Bingwa) who at first does not want to judge the men who are committing so many atrocities outside. However, as they can see through their small window three men raping a woman, she is horrified to recognize one of the young men. He sings in the choir at her church! As the days go by and they witness further acts of cruelty, she begins to question her faith—how can a just God stand by and do nothing?

Mutesi (Bola Koleosho) is an acid-tongued Tutsi complaining that she has to stay with a member of the hated Hutu tribe, even if Annick and her husband themselves are on an extermination list. She resents Annick’s pregnancy, claiming that if it is a boy he will grow up to kill Tutsis. She has good reasons for being bitter, having been raped without any recourse for obtaining justice.

The fourth occupant is Peyton (Ella Cannon), an American volunteer who has come to Rwanda to help the people in a Peace Corps type of NGO program. At first the Rwandan women resent her for her white privilege, but as the days go by, she reveals that she too has been wounded by family, even attempting suicide at one time. Her dedication is put to the test when Francois returns with food and the good news that the UN is providing an opportunity for evacuation. There is a catch, however, much to the dismay of the all of the women–only whites are being evacuated at the present. Feeling the injustice of this, Peyton refuses to go.

Mutesi is not yet won over by the American, complaining that by staying there will be less food for each of them. It is Peyton who, perhaps because of her training, discovers a way to devise a latrine so that their wastes will be drained out of their cramped quarters, and it is a book that she has stowed in her backpack that helps buoy their spirits during their seemingly endless ordeal. It is a children’s book by Susan Elijah Kern, Seeds of Love, Trees of Peace. The women take turns reading from it. I wish the film had included some quotes from it so that we can see how its message appealed to the women. (The book is apparently out of print, because I could find nothing on it when I searched the Internet, not even on Amazon Books or eBay.) Obviously the book made a good impression on the filmmaker, she taking the title of her film from it.

The days drag on, with Francois returning several times with food and the hope that eventually he will be able to get the women to the Hotel Milles Collines in Kigali—this is the hotel in the film Hotel Rwanda where the manager gave sanctuary to a thousand Tutsis during the crisis. The women’s bickering gives way to friendship as they share their personal past sufferings, and thus begin to understand one another. A sense of sisterhood develops, but it is put to the test many times by the increasingly prolonged absences of Francois. At one point they are led to believe he has been murdered, and they have to stand by helplessly while armed Hutus force a man to murder with a machete several children, only then to be hacked to death himself. The armed militiamen repeat the epithet they have heard over the radio, that Hutus are “cockroaches. “As the days pass into the 70s and then reach 81, the women are so hungry and exhausted that they are barely conscious, drifting off into uncomforting sleep most of the time.

The story, told through the device of Annick reading in her journal, is fictional, but based on those of actual survivors. It is disheartening to see that our leaders, as well as the United Nations forces, stood by and did nothing while up to a million men, women and children were hacked to death. But the film itself celebrates the resilience of the human spirit and the possibility of reconciliation and sisterhood through shared suffering. The actors are all excellent in their portrayal of anxiety, hostility, hope, and growing despair. Alanna Brown uses the camera well in providing us with various angles of vision, most of the shots being close-ups that help emphasize the claustrophobic confinement experienced by all four women. She also holds back from graphic depictions of the violence—we only hear the voices of the Hutus compelling their captive to murder the children, and the rape that is seen through the window is mostly out of focus at a distance.

This is an excellent film to place along side the other two films about this horrific event, Hotel Rwanda* and Sometimes in April*. We need to see it and resolve “Never again!”

*These two films were reviewed in the Summer 2005 VP but are not available as separate reviews on line.

3 Rwandan & 1 American woman hide from Tutsis in a tiny space while the Genocide unfolds outside & they try to get along inside for 81 days.
Editor Rating ★★★★★4.5 out of 5
More Details