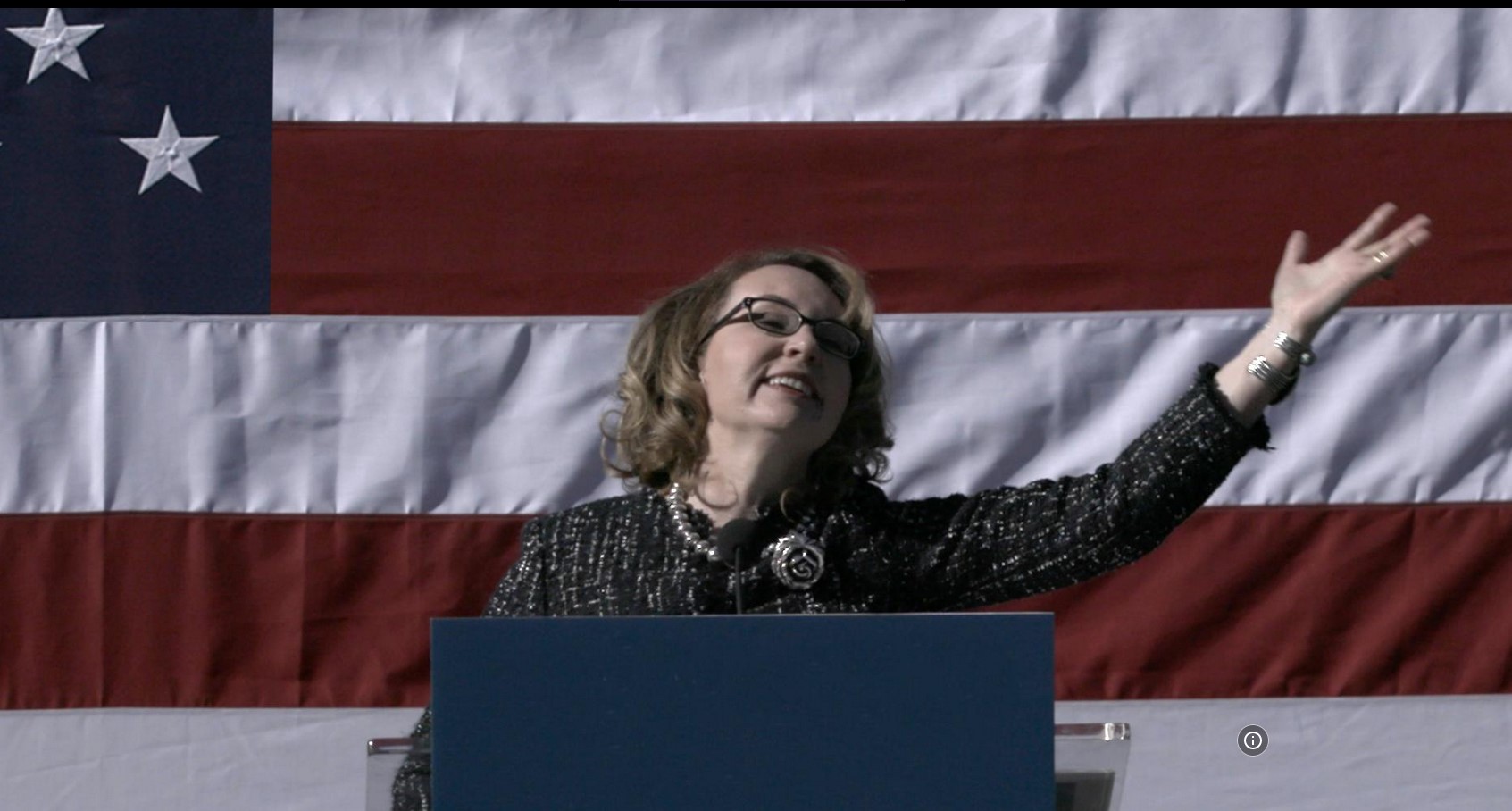 By this I know that you are pleased with me:
because my enemy has not triumphed over me.
But you have upheld me because of my integrity
and set me in your presence forever.

No matter where you stand on the heated gun control war, you will come to admire the courage of U.S. Representative Gabrielle Giffords who fought hard to recover from her brain injuries when she was shot outside a Tucson area grocery store on January 8, 2011. Although she was the target of the shooter, 18 others were also shot, six of them dying. Among the dead were federal District Court Chief Judge John Roll; Gabe Zimmerman, a member of Giffords’ staff; and a 9-year-old girl, Christina-Taylor Green.

Co-directors Julie Cohen and Betsy West, who gave us the delightful 2018 documentary, RBG, begin their film in the present by showing us a series of white rose bouquets in front of the National Mall—almost 1200 of them, each placed to represent an American felled by gun violence. Gabby Giffords is moving slowly among them. Then as the opening credits roll, archival footage chronicle the amazing rise of this Tucson native, from helping to manage her family’s failing tire company to membership in the state legislature. She was elected to the state senate and ultimately to the U.S. House of representatives—all while fulfilling her duties as the wife of NASA astronaut Mark Kelly and mother of two  stepdaughters, Claudia and Claire.

This sequence showing her promising career as a Congresswoman abruptly shifts to footage of her long hospital stay, where emergency brain surgery saved her life. With her head shaved and her stitches starkly showing (a large section of her skull had to be removed to relief pressure on the brain—later she shows us she keeps that section wrapped in a plastic bag in the freezer of her refrigerator), she struggles to give Mark a thumbs-up. This and most of the rest of the footage of the various stages of her recovery were taken by Mark because he believed she would want to see her progress later on. For this we can be thankful, the resulting documentary providing an inspiring example of pluck and courage.

Compassionate physical therapists patiently helped her to recover her ability to walk and speak. Progress is slow because of aphasia—she says, “The words are in my brain, but I can’t get them out.” It becomes evident that a speech therapist must have both extreme patience and the empathy needed to keep her patient motivated—which those who work with Ms. Giffords obviously have, in abundance.

We learn a lot about her remarkable marriage, her heart-wrenching return to Congress to vote to raise the debt limit and then her resignation the following January so she can concentrate on her recovery. One of the flashbacks shows us that on the same day as her brain surgery in Houston Mark is commanding a space shuttle launch—one of those hard decisions he had to make during her hospitalization. Beneath the split screen of her surgery and Mark concentrating on his mission high above the earth, David Bowie’s “Space Oddity” plays, it’s lyrics becoming even more meaningful, “Tell my wife I love her very much/she knows.” And of course, also part of the soundtrack is Tom Petty’s great song “Won’t Back Down,” so appropriate as Gabby moves from victimhood to advocacy—she and her husband forming Americans for Responsible Solutions, dedicated to promoting background checks on gun buyers and related issues. I think you’ll love the scene near the end when she’s riding her three-wheel bike and singing John Denver’s “Country Roads”!

Gabby’s progress is beautifully shown when she at first cannot form the words to “Happy Birthday” at first. But she has always liked to sing, so she keeps at it, and years later we see her at her birthday party, surrounded by loved ones, heartily singing the lyrics. She learns to speak simple sentences, but can no longer give the speeches necessary for a political career, so Mark steps up to the plate to hit at least a three-baser if not a home run—he is elected to the US Senate (he has retired from NASA). There is a lot of humor in the sequence in which Gabby becomes his chief critic; he practices his maiden Senate speech in front of her, and she frequently interrupts him with corrections.

Gabby travels, to Washington DC and elsewhere, to advocate for gun reform, even to Newtown after the school shooting. She speaks slowly and deliberately, often hesitating over a word. She comments, “Words once came easily. Now I struggle to speak, but I have not lost my voice.” And she uses it to promote the safety of others! We also hear from the other side via a couple of clips of Wayne LaPierre, always refusing to compromise on gun control. In one clip we hear him declare that the only solution to a bad man with a gun is to have present a good man with a gun. This is effectively countered by the revelation that there was such a man present when Gabby and so many others were gunned down, but that in the confusion when bystanders wrestled with the killer, the intervener who seized the gun could have been mistaken for the shooter and shot down. Also, Gabby points out that she is a gun owner herself, and thus is not against guns but is advocating better control of their sales.

The film chronicles the trial and sentencing of the shooter—during which she and other victims oppose using the death sentence—and its aftermath. Her story is not one of forgiveness, but of moving on, the couple telling the killer that they will continue with their lives and never give him another thought.

This beautiful film makes it clear that if the book Profiles in Courage were being written today, former Congresswoman Gabrielle Giffords would be included. To use Tom Petty’s words, she has stood up” at the gates of hell” and, with the support and encouragement of so many, refused to back down. After watching this film you will feel blessed.

Note: If you check this out on IMDB include the year because there is another documentary of the same name. (We have reviewed it also.)

The story of Congresswoman's Gabby Giffords' struggle to recover from her gun shot wound, her strong marriage, & her advocacy for gun control.
Editor Rating ★★★★★5 out of 5
More Details