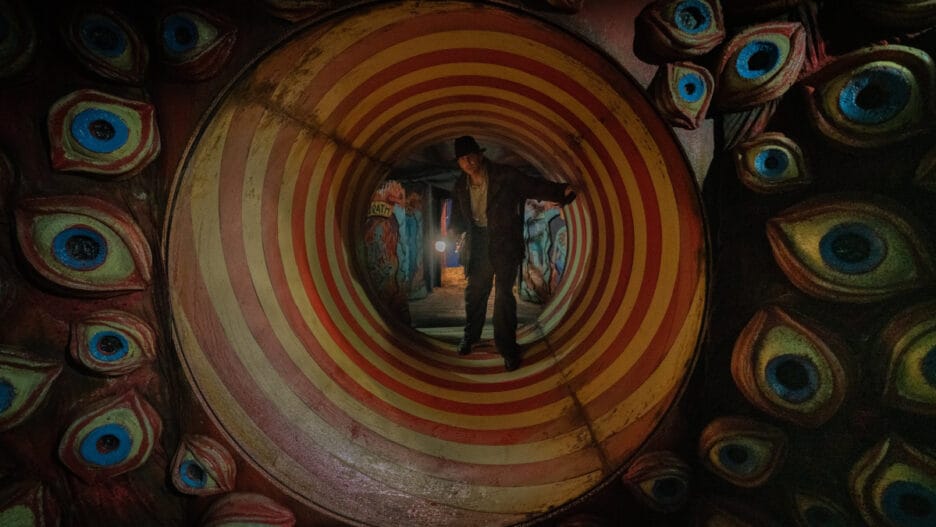 Mark well that God doesn’t miss a move you make; he’s aware of every step you take. The shadow of your sin will overtake you; you’ll find yourself stumbling all over yourself in the dark. Death is the reward of an undisciplined life; your foolish decisions trap you in a dead end.


For the wages of sin is death

Mexican director/co-writer Guillermo del Toro dips into American film history in his stylish version of the 1946 dark novel William Lindsay Gresham. This is not a remake of the 1947 film noir, the filmmaker has asserted.

To me film noir seems based on the medieval view of the total depravity of humanity, with the “female of the species” the most depraved of all, hence the femme fatale. (Even Adam seems to regard Eve as such—see Genesis 3:12!) Both films are derived from a novel that could have been inspired by the apostle Paul’s warning. Indeed, several of the critics covering both the book and the older film have pointed out that the left-wing Gresham, who had fought in the Spanish Civil War and first heard about the role of the Geek in carnivals from a fellow combatant, was actually mounting an attack on the then vaunted “American Dream,” based on the worst aspects of capitalism with its greed and disdain for the poor.

De Toro chooses color over the traditional black and white, but his telling is just as bleak as ever in what we could consider as an American version of Shakespeare’s tale of the over ambitious Macbeth. Both film versions regard the world as a great carnival with the smart cheaters in charge luring gullible suckers into parting with their money. Instead of Tyrone Powell we have Bradley Cooper as the anti-hero Stan Carlisle. We first see him walking away from the burning house containing the corpse of his father, so we know he has been up to no good. Stan finds a job at a carnival run by Clem (Willem Dafoe). In the carnival society is sharply divided, the manager and class acts such as acrobats being at the top, then clowns and barkers, roustabouts, and at the bottom the Geek. The latter is a long-time alcoholic so devoid of all dignity and desperate that for food and lodging he is willing to bite the heads off live chickens for a disdainful audience.

Stan’s one talent is his ability to ingratiate himself, so he works his way up to an assistant to the mind-reading Zeena (Toni Collette) and her alcoholic husband Pete (David Strathairn). The couple had developed an act based on a complex, coded system, in which a blind-folded Zeena claims she can read a person’s mind or identify objects that an assistant holds up. Their high status on the show business circuit had ended due to Pete’s drinking, so now they work in the carnival. Stan  gains access to the couple’s valuable codebook and then inadvertently causes Pete’s death. Or was it premetitated?

During his time at the carnival, Stan also worms his way into sweet Molly’s (Rooney Mara) affections, who pretends to be electrocuted every night in a sparking act using Tesla coils. Seducing her, they marry, and the pair leaves the carnival to take the mentalist act out into the larger world. In Buffalo they are such a nightclub sensation that all the members of the city’s elite attend their shows, taken in by the clever ruse of the pair. The seductive Dr. Lilith Ritter (Cate Blanchett), a psychoanalyst with a wealthy clientele, partners with Stan to fleece her patients. She has recorded them as they reveal their secret during therapy. One of them is a judge’s wife (Mary Steenburgen) longing to get in touch with her dead soldier son. But then, there is her unscrupulous and suspicious husband. In his quest for wealth is Stan, like the ambitious Macbeth about to over-reach himself?

This is not a movie for those looking for someone to root for. Even darker, despite its color, than the original, it depicts humanity at its worst. Well, almost, as there is Schindler’s List, though at least there we have some caring people.

Back at the carnival Clem presided over an attraction called House of the Damned, within which there is a sign by a mirror, “Take a look at yourself, sinner.” Stan should have done so, as well as heeded the warning of the dead Pete who had forewarned him about going too far with the mentalist act.

Later, Stan reflects upon the fact that he has crossed a line not to be crossed, but that he had not seen it. Of course, he had not, having become morally blind. Stan has become the fool, often described and ridiculed in the Book of Proverbs and Ecclesiastes. He is the rich fool described by Jesus in two of his parable (Luke 12:13-21 and 16:19-31.) The film comes full circuit when a down and out Stan returns to the carnival and asks Clem for a job. I need not tell you what it is.

A film noir adapted from a dark novel about a the rise and fall of a ruthless carnival worker whose ambition leads to his own downfall.
Editor Rating ★★★★★4.5 out of 5
More Details