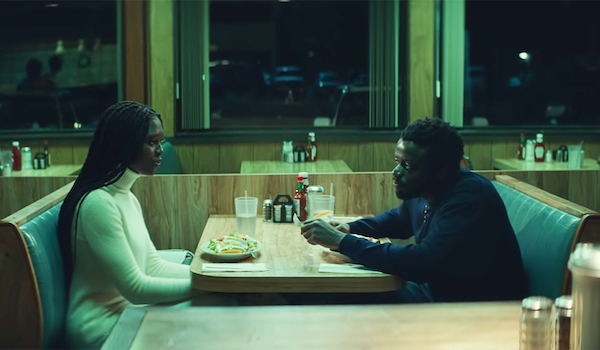 Their mouths are filled with cursing and deceit and oppression;
under their tongues are mischief and iniquity.
They sit in ambush in the villages;
in hiding places they murder the innocent.

First time feature director Melina Matsoukas combines Black Lives Matter with the age-old theme of criminals on the run, the result being a film that though grim, is also at times a funny commentary on racial relations in the nation. The script by Lena Waithe (based on a story idea given her by James Frey) reverses the usual scenario of pulled over young black man shot by racist cop. In this story it is the cop who dies, though the young black man who escapes might well be referred to as “Dead man walking.”

The film begins in a nondescript diner in Cleveland Ohio where Angela is on a Tinder date with Ernest (they are the Queen and Slim of the title, though I don’t recall them ever calling each other by these names. However, those are what I will use hereafter, given the title of the film.). She is a defense lawyer and he some kind of a retail employee. The place and the food are clearly beneath her social level, so she needles him with, “Did you pick this place because it’s all you could afford?” Spearing some of her unwanted food with his fork, Slim replies no, it was because it is owned by blacks. They are soon on their way to her home—for a drop off and not for sex, she makes it plain, having told him earlier that she was on the date because she felt lonely.

Slim swerves the car slightly, and soon they hear and see what every black person, especially a man, dreads at night—the flashing lights and siren of a police car. The overly aggressive Officer Reed (Sturgill Simpson) resents Slim’s questions about why he was pulled over or why he is ordered to get out of the car. Queen informs the officer that she is a lawyer and knows their rights. All this only adds to the irritation of the cop, so that when Queen gets out of the car, the cop goes into a rage, firing his gun at the woman and grazing her leg. Immediately Slim is grappling with the cop, picking up his dropped gun, and shooting the officer when he charges him.

Queen has seen firsthand the lack of justice for black males, so she tells Slim that they must flee. For him it is either that or die. They ditch their cellphones (they can be traced) and speed away, leaving the dead body at the side of the road where he fell. In Kentucky they have a close call with a county law officer who stops to help them when their car runs out of gas. Although white, he is very different from the first cop, genuinely wanting to help them. However, as they wait in his truck while he goes inside the gas station for a gas can, they note that his demeanor has changed. They guess correctly that he has seen a bulletin that has gone out—indeed, the video of them and the cop, captured by the police car’s dashboard camera, has gone viral on TV, cable, and social media. The next day they will see their pictures displayed in newspaper stories as well. They manage to grab the cop’s gun, and when they return to their car, they lock him in the trunk and take off in his truck.

Their vague plan is to somehow get to Florida and then Cuba where they hope to be safe from the law. But first, Queen says, they should get to New Orleans where she believes her uncle will help them. They discover they have left their wallets and cash back in their call, so the next morning the moneyless Slim has a strange encounter with a convenience store clerk who strikes a strange bargain for $20, making us realize that the video apparently has made them into folk heroes appealing to both races.

Uncle Earl (Bokeem Woodbine) is a flamboyant pimp with live-in women, the latter tending to Queen’s wound and cutting off her long dread locks and refashioning her hair, so she won’t be so recognizable. She also changes her wardrobe by ditching her blood-stained white jeans and donning one of the prostitute’s zebra-striped dresses that is so short and tight that it reveals more than it conceals. The reluctant relative burns their truck in a deserted area, gives them enough money for food and gas to make it to Florida, and sends them on the way in one of his many cars.

Along the way they discover just what folk heroes they have become. Uncle Earl had joked about them being Bonnie and Clyde, but we know this is not accurate, the white couple being criminals who robbed banks and stores. Neither of them had ever done anything illegal. At night they stop in a juke joint for respite, soon joining the crowd of blacks dancing to a small live band. When Slim goes over to the bar for drinks, the female bartender tells him not to worry, they are in a safe place. This recognition alarms him, so that after a drink the pair leave. When their car breaks down the next day, the black mechanic and his teen aged son ((Jahi Di’Allo Winston) also recognize them. Neither is about to tell on them, but the man drives a hard bargain for repairs, taking all of their money. The boy so admires them that later he will come to grief over them.

In another city the pair are welcomed by a white couple, Mr. and Mrs. Shepherd (played by Flea and Chloë Sevigny) but their stay is interrupted during supper when the host spies through a window dark forms moving outside. At his urging, the guests flee upstairs where they find the secret compartment under the bed to hide in—shades of the Underground Railroad stops! Only these fugitives from racism are fleeing from the north to the south, and their benefactors are not part of a system, but acting spontaneously to help the fugitives. The SWAT team barges into the house, but when a member searches the bedroom, he finds no trace of the quarry. (Earlier we had seen that a neighbor across the street had noted the strangers’ arrival, and thus must alerted the police.)

The couple spend the night in the compartment, emerging in the morning to an empty house, their hosts having been taken into custody. By ingenuity and a (very) unexpected act of grace they are able to escape and head for Florida where they plan to meet a man whose address the white couple had given them. He in turn will connect them to a man with an airplane who can fly them to Cuba.

Along the way they revel in their freedom and incredibly good fortune. Their slowly awakening passion boils over, the two engaging in sex in the car. Short bits of this are juxtaposed with scenes of hate in the town back where their car had been repaired. A crowd of angry blacks carrying signs in support of Queen and Slim confront a squad of heavily armed cops. Among the crowd is the mechanic’s teen aged son, who has brought a gun with him, the result ending in a way starkly contrasting with the love scene in the car.

What happens when Queen and Slim at last reach the airfield where their airplane awaits them will leave you pensive and disturbed. This is an important film that suggests that there is a solidarity among those disgusted by the way in which the white racist police and justice system has treated blacks ever since the days following the demise of Reconstruction. One you will not soon forget!

Whereas this film is one that groups ought to see and discuss, the scene of passionate sex is a stumbling block that any leader considering the use of the film ought to talk over with group members. We expect the disparate couple to fall in love during their ordeal—virtually all similar Hollywood films of flight include this—but the filmmakers leave nothing for the imagination, there being full frontal and rear nudity as the couple express their passion for each other. On the other hand, this scene of erotic love that overcomes the difference between the university-trained Queen and the blue collar Slim. Skillfully inter-cut with scenes of the street demonstration expressing hatred and violence, is a powerful moment, second only to the final confrontation of Queen and Slim with their pursuers.

People of faith will be touched by the unseen spiritual pilgrimage of Queen. An avowed atheist at the beginning of the film, it means little to her back in that Cleveland diner that Slim, even out in public, had offered a silent prayer of thanksgiving before he touched his food. He has even gone to the trouble to obtain a vanity license plate that reads “TRUST GOD.” His almost fatalistic view of God and fate might not be embraced even by believers, but it is sincerely held, and no doubt has been an asset during their desperate flight. And it must have rubbed off onto his companion, a subtle working out of a saying attributed to Francis of Assisi, “Preach the Gospel at all times, and if necessary, use words.” The white couple who provide the fugitives brief refuge ask for a prayer as the four of them sit down to eat. It is not Slim, but Queen who offers the table grace, thanking God for the food, concluding with “Thank you for this journey, no matter how it ends.” O for a world in which it could have ended differently!

The story of an unlikely black couple who, in flight from a cop killing, journey through the South where both blacks & whites consider them folk heroes.
Editor Rating ★★★★★4.5 out of 5
More Details