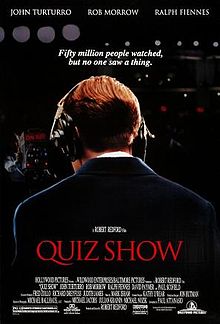 Here’s a good film for Lent with its theme of temptation.

And the Spirit immediately drove him out into the wilderness. 13 He was in the wilderness forty days, tempted by Satan; and he was with the wild beasts; and the angels waited on him. 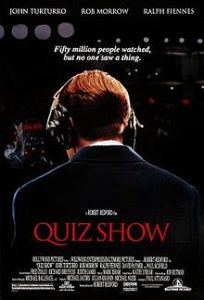 Director Robert Redford has served us up an intriguing tale of ethics and temptation in this film that marks “Northern Exposure” actor Rob Morrow’s film debut. Much has been written about the disclosure of the rigging of such quiz shows as “Twenty One” as marking the “loss of innocence” of America back in the Fifties. Baloney. Yes, there was disappointment, even dismay. But, coming of age myself in the Fifties, I knew too many friends concerned about McCarthyism and the career-ending black lists in television, Hollywood, academia, and government to be very bothered by the news that the quiz shows were not on the up and up. Few people who knew television believed that the quiz shows were about knowledge or intellect – they were entertainment, first and last, designed to draw an audience for a sponsor. The Fifties were nothing like what has been conjured up in some articles or in such shows as “Happy Days.”

Instead of loss of innocence, watch this film from the standpoint of an engrossing study of how temptation works. You don’t have to believe in a green-eyed serpent hissing his blandishments into our ears to see that the age-old Genesis tale of the Garden and the Fall is as relevant now (or in the Fifties) as in ancient times. Temptation always dresses up its blandishments in positive form. After the television audience begins to lose interest in nerdish contestant Herbert Stempel (John Turturo), the producers of “Twenty One” recruit the all-American-looking Charles Van Doren (Ralph Fiennes) and offer to give him the answers to the questions. To his credit he turns them down at first, but falls to their argument that he could do so much for American youth and education if he were to win big on the show.

A good teaching/preaching scene: the confrontation between Congressional investigator Richard Goodwin (Rob Morrow) and Van Doren. The scholar asks Goodwin if he were offered a chance to make $25,000, wouldn’t he go along with the arrangement. Without any hesitation Goodwin says “No, I wouldn’t.” Would most of us need at least a second or two to ponder our reply?

When a quiz show producers tempt the son of a famous poet to cheat, he hesitates & then accepts, leading to a great scandal of the 50s.
Editor Rating ★★★★★4.5 out of 5