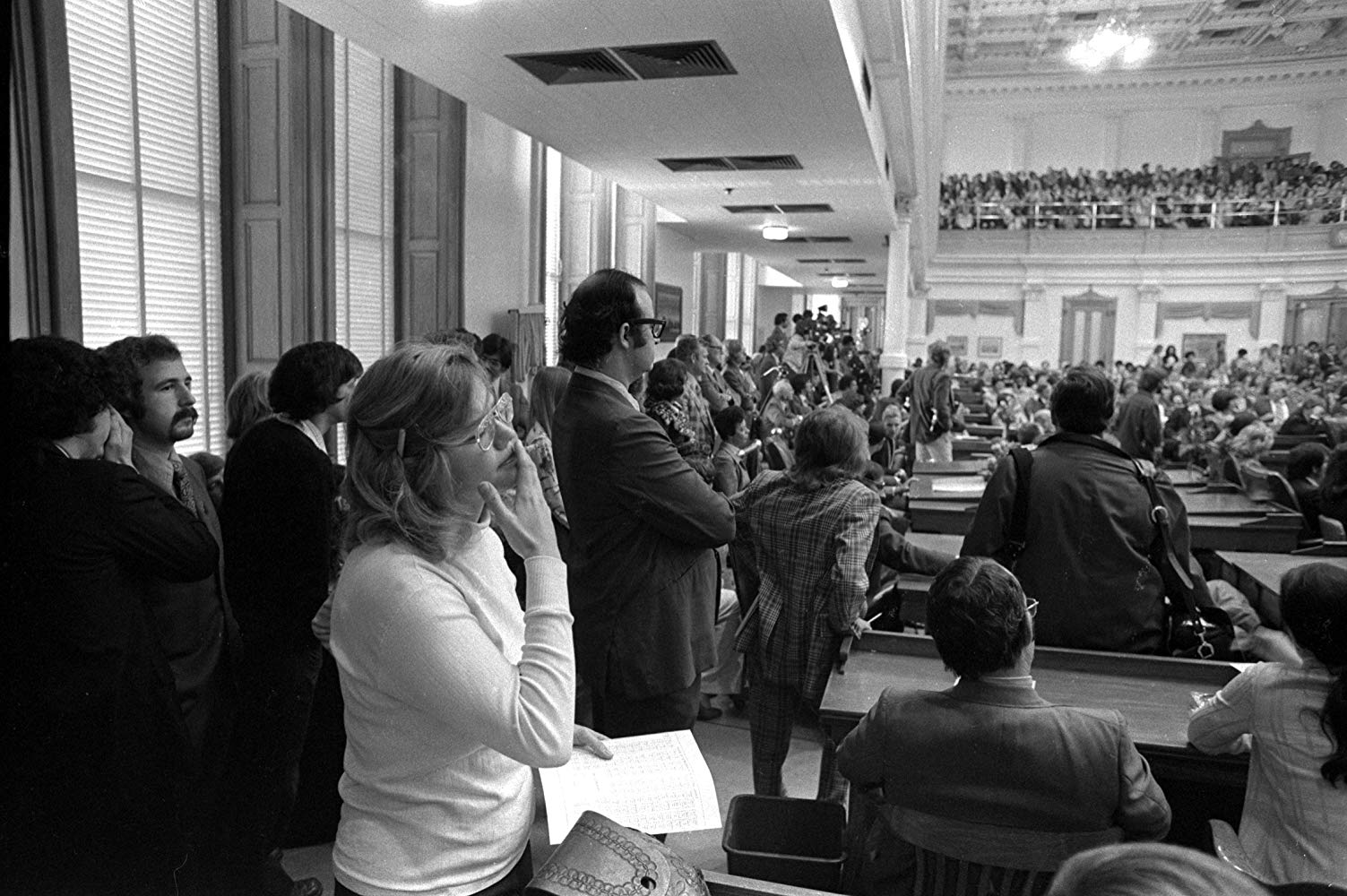 Speak up for those who cannot speak for themselves,
for the rights of all who are destitute.
Speak up and judge fairly;
defend the rights of the poor and needy.

Director Janice Engel’s documentary elicits lots of laughter, but this is not the story of a comedian, but rather that of a journalist who was sort of a combination of Mark Twain, Bernstein and Woodward, and an Old Testament prophet. Molly Ivins might have been an alcoholic who needed an intervention by loved ones to save her life, but she was a member of the elite who became an outsider in order to take up the cause of outsiders. The filmmaker calls upon a large group who knew and loved her, including her brother and sister Andy and Sara Ivins; numerous friends; a former boss; co-writer Lou Dubose; fellow Texan Dan Rather; cable commentator Rachel Maddow; archival comments by Gov. Ann Richards; and interviews with the latter’s daughter Cecile Richards; and others.

Molly grew up in a posh section of Houston, her father a conservative oil industry executive. A lover of books, she was called “the mole” because she went off to her room (or climbed up in a tree) by herself to read. By the time she was 12 she was 6 feet tall. Watching Humphrey Bogart play a correspondent in Deadline – U.S.A, she decided that she wanted to be a journalist. She went north to Smith college, which, apparently added to her reading knowledge, convinced her that her father’s opinions about the poor and blacks was wrong, their difference erupting when she dared to invite an African American friend whose invasion of the family swimming pool provoked the older Ivins’ wrath.

Gaining a masters degree in journalism at Columbia University, she went off  to join the staff of the Minneapolis Tribune. It was a time when male chauvinism was still entrenched, so she writes that female reporters were usually relegated to the “women’s sections” of newspapers and write about “food, fluff and fashion for the rest of your natural life.” Instead, she became the paper’s first female crime reporter. Her criticisms of the police department’s tactics led them to adopt a pig as a mascot, which they named Molly.

In the early 1970s she moved back to Texas as an editor and political reporter for the Texas Observer. Texas folklorist John Henry Faulk, famous in the 50s for his radio work and his leading the charge against McCarthyism and the blacklist, became her mentor. She loved Texas, saying, ““I’m a Texan. I drive a pick-up truck. I drink beer. I cuss. I hunt. I’m a liberal. So what?” But she was well aware of its shortcomings, calling it “the national laboratory for bad government.” She wryly observed, “Texas public policy is like Hungarian wine, it doesn’t travel well.”

Molly’s humorous columns led to a stint at the New York Times, where the staid editors assigned her to write the obituary of a man they knew nothing about, Elvis Presley. She wrote so bluntly that her copy often required changes to match the Gray Lady’s colorless style—in her obituary she referred to the King as a “plump corpse.” After her exile to the Times’ one-reporter Denver office, she was lured back to Texas by the Dallas Times-Herald promise that she could write with “absolute freedom” about anything that she wanted. Thus began the Molly Ivins so many came to love or hate, her columns at the height of her popularity appearing in 400 newspapers.

Her columns so upset Dallas politicians that her paper moved her to Austin to cover the state legislature. Conservatives besieged her with hate mail, some of the missives being death threats. The paper picked up on “Molly Ivins Can’t Say That, Can She?” and used it in a publicity campaign for the paper. It also became the title for her first book, a best seller. Invitations to speak around the nation and on TV increased, she becoming a frequent guest on David Letterman’s show– included in the film is her famous summing up of Vice President Dan Quayle, “I found him dumber than advertised. Put that man’s brain in a bumblebee, and the bee’d fly backwards.” She was even harder on Newt Gingrich. “You speak of the draft-dodging, dope smoking deadbeat dad who divorced his dying wife?”

Rachel Maddow comments on her attacks on the powerful, “She was not afraid to be angry, but she made a case that she was doing it because it was deserved, and she made you laugh while she was doing it.  I don’t know anybody else who does that now.” Having observed Governor Bush up close in Austin, she was not one of those fooled by his claims for the invasion of Iraq. With Lou Dubose (who appears many times in the film) she wrote two Shrub: The Short But Happy Political Life of George W. Bush and “Bushwhacked. She sums up these books well in her statement, “The next time I tell you should not be president of the United States, please pay attention.” She could be tough on Democrats also. She voted for Bill Clinton, but when it became obvious that his welfare reform bill would hurt millions of children, she said that she would not vote for him again, and so refrained from voting in the 1996 Presidential race. Not taken in by Clinton’s famous charm, she wrote that he was “weaker than bus station chili.”

The film’s saddest part comes at the end, with family and friends having to intervene to stop her from drinking herself to death, a move she came to appreciate. Not so happy was the outcome of her 8-year battle against breast cancer, Molly succumbing to it on January 31, 2007, thus silencing a voice that the nation could benefit from today: see how right-on this quotation is:  “When politicians start talking about large groups of their fellow Americans as ‘enemies,’ it’s time for a quiet stir of alertness. Polarizing people is a good way to win an election, and also a good way to wreck a country.”

Despite all of the bad politicians and policies, she never gave up on democracy, declaring, “We are the board of directors. We own it. They’re just the people we’ve hired to drive the bus a little while.” This film ought to expand her fan base and enhance the appreciation of old fans of her rich legacy. I can think of no better closing of this review than her own admonition: “So keep fightin’ for freedom and justice, beloveds, but don’t you forget to have fun doin’ it. Lord, let your laughter ring forth. Be outrageous, ridicule the fraidy-cats, rejoice in all the oddities that freedom can produce.”

To see some of the many memes containing Molly’s pithy quotes click here.

The film uses clips, archival photos & interviews to tell the story of the Texan journalist Molly Ivins who poked fun at & exposed the faults of politicians.
Editor Rating ★★★★★5 out of 5
More Details