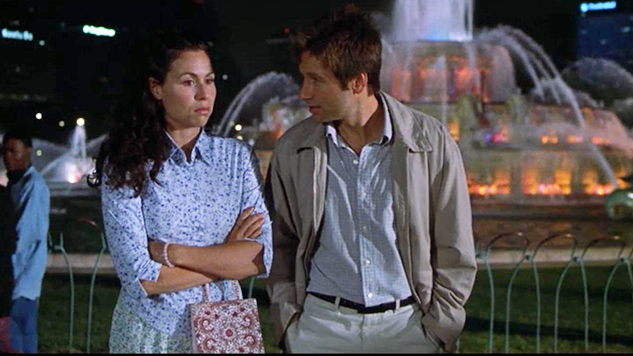 Weeping may linger for the night,
but joy comes with the morning.


…for he makes his sun rise on the evil and on the good, and sends rain on the righteous and on the unrighteous.

Director/co-writer Bonnie Hunt’s 20-year-old romantic film could easily have gone astray were it not for its solid cast and attention to details of character. There’s a gaggle of old timers who meet for cards and gossip in a restaurant owned by an Irishman yet serves Italian food that is absolutely delightful—it’s great fun hearing the old codgers debate the merits of such singers as Sammy Davis, Dean Martin, Bing Crosby and Frank Sinatra. The main characters, two lovers Bob Rueland  and Grace Biggs, played by David Duchovny and Minnie Driver, are so appealing that we can overlook some of the film’s sentimental excess. No, make that three lovers, because Joely Richardson is so good at playing Bob’s first wife that we really feel his loss as ours as well.

The film begins with Elizabeth, a noted zoologist at Chicago’s Lincoln Park Zoo. She has spent years teaching a smart gorilla named Sydney how to communicate via sign language. Her dream is to expand the primate’s cramped quarters so he will have more space in which to roam. Her architect/contractor husband Bob is well on the road to make that dream come true, construction ready to begin as soon as the funds are in hand. Elizabeth enjoys a special banquet night with lots of potential donors on hand, but on the way home is killed in an auto accident.

Meanwhile, in another hospital the weakened Grace (Driver) is tended by her best friend Megan Dayton (Bonnie Hunt). Grace will die unless she receives a transplant. You don’t need me to tell what happens next.

A year passes, and the recovering Grace works as a waitress in Old Town at O’Reilly’s Kitchen, run by her doting grandfather, Marty (Carroll O’Connor), and his best friend and chef, Angelo (Robert Loggia). Orphaned since childhood, Marty has raised her, with his three close friends treating her like beloved uncles. They all, along with Megan, want her to find a mate, but she is extremely reluctant to date because of the large scar left over from the heart transplant. Of course, there is a cute meet-up with the still in mourning Bob, who is continuing the gorilla project at the zoo in memory of his wife.

Bob’s best friend Charlie Johnson (David Alan Grier) also works at the zoo as the veterinary in charge of Sydney. He persuades his friend to join him and his wife and a woman he thinks would be suitable. It is to be

a dinner party at, where else?– O’Reilly’s. The blind date turns out to be terrible, but while taking their orders Grace’s quick wit arouses Bob’s interest, and…

Of course, Grace will be the first to learn whose heart she now bears, and will not be able to tell him or stay with him, and…I know, this is all predictable, but the cast is so good, I found myself forgetting the implausibility of the plot, swept along with the emotions of the characters. In addition, the Bob and Grace’s story, there are several warm, humor-laced scenes featuring Megan and her gruff but lovable husband Joe (James Belushi) coping with five spitfire kids that the two handle well. Even Sydney the gorilla takes a liking to Grace, and there is a sequence set in Italy involving three charming nuns and Grace’s bicycle that add to the enjoyment of watching the film.

All the characters seem to share a Catholic faith that, though it does not make them overly pious, seems to sustain them during their hard knocks. During the low point in the story Marty O’Reilly says to Bob, “I know that what’s happened has been overwhelming. And I know it’s going to take a while to sort it all out. But while you’re sorting, I want you to remember that all the times I prayed that Gracie would have a second chance at life, I always knew that if God blessed us, the heart she got would have to be from a very special person, if it were going to be at home in Grace. When she met you, her heartbeat truly for the first time. Perhaps it was meant to be with you always.”

Who says corn can’t be fun, especially during a grim time as we now find ourselves? I don’t know how I missed this when it came out; another case of better late than never. I am sure these close-knit friends and family members would be able to cope with the chaotic mess that our world is today.

Widower Bob Rueland falls in love with Grace, but both are unaware that her transplanted heart came from his deceased wife.
Editor Rating ★★★★★4 out of 5
More Details