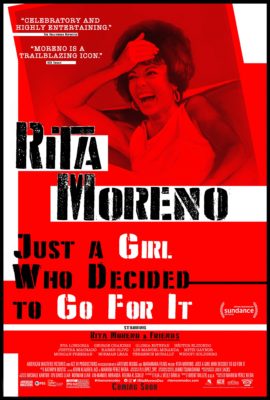 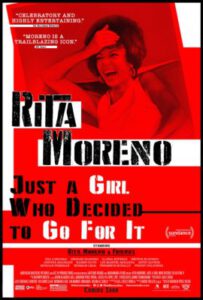 Miriem Pérez Riera’s sparkling documentary not only chronicles the rise of Puerto Rico’s most popular emigrant to the US but also espouses her fight against racism that limited her movie roles and the rights of survivors of sexual abuse, the latter also something she had experienced. There are clips from a wide variety of movies & TV series she has appeared in, and she is often on camera to speak for herself. Backing her up are numerous luminaries commenting upon and explaining the times—among these are Whoopie Goldberg, Lin-Manuel Miranda, Eva Longoria and Norman Lear.

The story begins with her origins in Puerto Rico where she recalls she and other children enjoyed playing around and in the water while her mother and other women washed laundry in the stream. The family moved to America where the little girl discovered she enjoyed being the center of attention, becoming a professional entertainer at the age of six. Dozens of photos and clips reveal what a lovely child and then adolescent she was, easily helping us understand why Mayer of MGM signed her on the spot when he met her in New York. However in Hollywood she was seen fit for roles as the Island girl who would lose out when a white lover would meet the white heroine. She also became the victim of rape, with no recourse open to her amidst the male patriarchy then prevailing in Hollywood and society in general. We also see lots of shots of Marlon Brando during the section on her long affair with what was often regarded as the sexiest man in America. (And though not delved into her, what the huge biography I read claims was probably also the most sex-obsessed man in the country, bedding down with literally hundreds of women!)

A long section is devoted to exploring Moreno’s role of Anita in the film version of Westside Story, including the controversy over Anita’s negative view of her native island. One thing apparent is that Anita’s fiery rebellion, her determination to speak her mind around the movie gang’s males mirrors her own growing urge to speak out. Her lover Brando was a strong Civil Rights activist, and Moreno herself became an advocate, especially for the redress of abuse by males and for the expansion of roles for brown-skinned actors beyond stereotypical ones of the past. To emphasize this, portions of her interviews include a television screen in the background tuned to Christine Blasey Ford’s testimony against Brett Kavanaugh

There’s lots more, including her roles on Broadway, her stint on The Electric Company, One Day at a Time and much more. She is proud of being a part of that rare club of EGOT winners (Emmy, Grammy, Oscar, and Tony Awards), as well she should be. And it is very evident that she is not through yet. Long live Rita! Those who love film and entertainers will love this glowing tribute to a star who overcame so many obstacles to be where she is today!