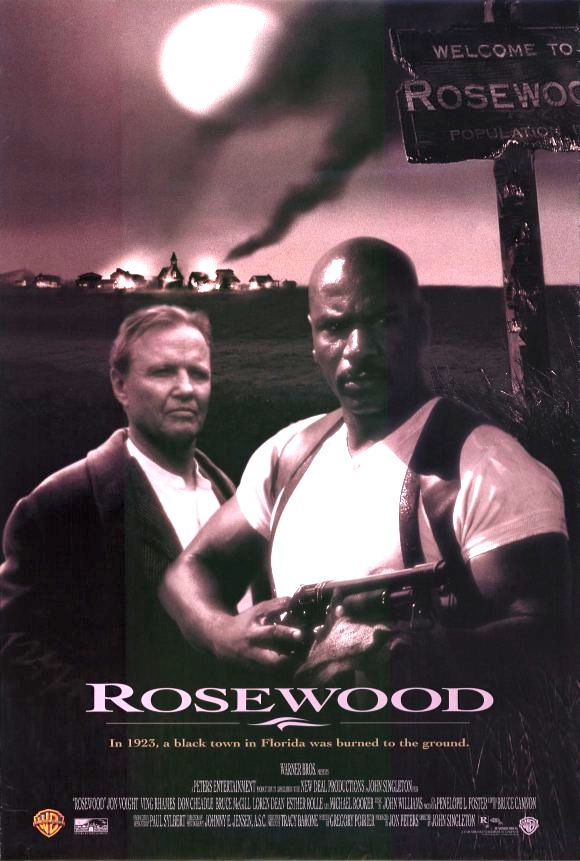 Henry Brinton’s excellent article in the current issue of ReadtheSpirit.com “Marking the Centennial of the Rosewood Massacre: Remembering our past prepares us to build a healthier future” prompts me to bring up from the archives this review of Rosewood in which Jon Voight and Ving Rhames starred. The film was directed by the great director of Boyz ‘N the Hood, John Singleton.


Once to every man and nation Comes the moment to decide,

In the strife of truth with falsehood, For the good or evil side;

Some great cause, some new decision, Offering each the bloom or   blight,

And the choice goes by forever 'Twixt that darkness and that light. 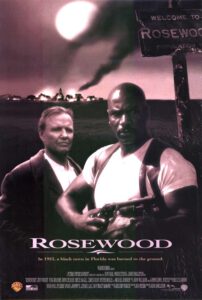 Director John Singleton’s newest film is a cowboy adventure set in the midst of a tragic historical event, the burning down of the Florida town of Rosewood, populated mainly by blacks, during the first week of January, 1923, by mobs from the neighboring white town of Sumner. A young white woman’s false claim to have been beaten by a black man so arouses the already jealous white men of the community that not even the sincere efforts of the sheriff to restrain their fury has any affect.

In the film the white woman is a wife having an adulterous affair with a hot-tempered white man, who beats her severely while her husband is away. Her black cleaning woman Aunt Sarah (Esther Rolle) knows that the story of her mistress is not true, but, not wanting to get involved or be seen contradicting a white person, she keeps silent as the story spreads. Her silence will be costly, both for her community and for herself personally. Meanwhile a stranger on horseback comes to Rosewood. Giving only the name “Mann” (Ving Rhames). He intends to buy a parcel of land up for auction, but the sale is interrupted by the inflammatory news of the white woman’s accusation. Mann, despite his desire to settle down and also his attraction to the independent-minded Scrappie (Elise Neal), decides to leave. Both she and her brother Sylvester (Dan Cheadle) urge him to stay and help defend the town, but Mann replies that he will probably be the chief target of the lynch mob. Of course, as in all good cowboy films, the reluctant hero cannot escape the impending storm.

Nor can the only white man living in Rosewood, John Wright (Jon Voight, owner of the only general store there. While sharing some of the prejudices of other whites of the era, John has tried to deal fairly with his black customers. He wants to avoid entanglement in the fiery events swirling around him and his family, but he is forced to make a choice when a wounded black farmer appeals for a hiding place. Other blacks have already been shot or strung up, their homes still burning. It is the kind of choice celebrated by James Russell Lowell in his great poem, one that certainly has great consequences for the shopkeeper and his family.

As we see the terrible events unfold, one scene of the bodies of black victims being dumped into a pit calling up similar scenes from Auschwitz, Bosnia, and Rawanda, the last words of the poem haunt us, “And behind the dim unknown, Standeth God within the shadow Keeping watch above His own.”  At first one wishes he would do more than just keep watch — and then we realize that God is indeed acting through the ensuing heroism of Wright, Mann and others, including even two white railroad engineers whom the former  persuade to bring their train to the rescue of the fugitive blacks hiding in the swamps.

Unforgettable scenes: One of the leaders of the mob forcing his son to “be a man” and gaze into the pit containing the bodies of Rosewood residents — see the description in “Lectionary Links” for April 20, 1997. Also, Mann finding a new use for his lethal pistol: when a crucial rod of the steam engine breaks, jeopardizing the train’s rescue mission, Mann puts the barrel of the pistol into the hole of the two parts. When asked what will keep the pistol in place, an engineer replies, “Prayer.” An interesting form of  Isaiah the prophet’s words, “And they shall beat their swords into plowshares”?

The white storekeeper John Wright, played by Jon Voight in Rosewood  reminded me of a similar person I met a number of times in 1964 during the Mississippi Summer Freedom project. All of us Civil Rights workers stayed in homes in the black section of the towns where the umbrella organization COFO (Council of Federated Organizations) had a Freedom Center. A friend and I were sent to Shaw, in the delta region, where Joe operated the more prosperous of the two little general stores that dealt exclusively with blacks (we joked about integrating them). Like John Wright, he was friendly and fair to his customers, carrying many on credit during the lean times in the winter when there was no work in the cotton fields. But we  were careful of what we said while shopping, knowing that he reported to the White Citizen’s Council. One night he called me aside to ask how he might contact the FBI or other Federal authorities if he needed them. He was being criticized for being too friendly with the CR workers, and an anonymous phone caller had warned him that he might become the target of a cross burning. He showed me the pistol he kept close-by beneath the counter, vowing to shoot holes through any #@!&  that acted against him. He told us how his parents had been shunned when they came from Italy, so he could understand how his customers felt. Yet he had to cooperate with the White Citizen’s Council if he wanted to stay in business, truly a man caught in the middle, as was John Wright.

I also wrote a theological reflection piece that included this film, so watch for it on my blog portion of this site.

This harrowing true story based on a racist massacre of Blacks manages to inspire hope due to the efforts of a few courageous Blacks, and even some whites, to help victims.
Editor Rating ★★★★★5 out of 5
More Details