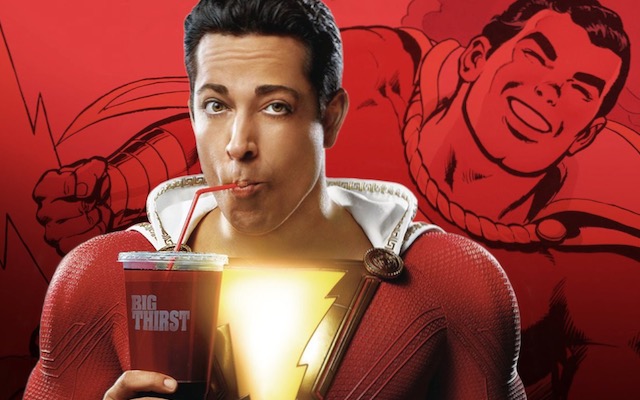 In this superhero origin story the abandoned Billy Batson (Asher Angel) is so obsessed with finding his birth mother that he refuses to stay in the various foster homes assigned him. Winding up with the Vasqueze family, he befriends the other children under their care, Eugene, Darla, Pedro, Mary and Freddy especially the latter two. To cut through a lot of the plot that deals with bullying at school and such, Billy is chosen by an ancient wizard to be the one “pure in heart” to receive special magical powers. When the boy says “Shazam” he becomes an adult costumed in a red skin-tight suit with a glowing yellow lightning bolt on his chest. A lot of the laughs come from the man/boy learning what powers he has and how to use them. This trial and error period is a hoot!

There, of course, has to be a super villain, and this is Dr. Thaddeus Sivana, who earlier in the film during his boyhood had been rejected by the wizard because of his impure heart. The boy was also constantly rejected by his father in favor of his older brother. When he manages as an adult to find and revisit the cave, where he seizes control of the idols of the Seven Deadly Sins and their super powers, he returns and bursts into the conference room where his father is meeting with his board of directors. His pent-up resentment boils over as he wreaks a terrible vengeance upon the cruel father, his brother, and board members who try to resist. Learning that another boy had received the powers of the gods, Sivana determines to seek out the person and destroy him also.

There’s a lot of silliness to the pagan mythology-based plot, but also a lot of fun as Billy slowly learns to be less selfish and become more caring for others. He might have been pure of heart in the eyes of the old wizard, but at first he is a long way from the super hero creed stating that their powers are to be used for others and not for themselves.

The hero in this DC series is different from what I remember as a boy when he was named Captain Marvel, who for a time was as popular with us kids as Superman. Thus I was confused when I saw MC’s Captain Marvel, until I learned of the labyrinthine business dealings of the comic book world. Wherein Marvel Comics obtained rights to the name.

I suppose it is good that Captain Marvel has, or rather, Shazam, his own movie franchise, though I will not be counting the days until the release of the sequel. The filmmakers clearly intend for us not to take the film seriously, their light-hearted approach similar to the campy TV version of Batman decades ago, but never going as far.

I continue to find it amazing that so many wonderful little films go begging for an audience while an MC fantasy can take in over a billion dollars in one weekend. That’s the kind of crazy world we live in–just look again at the crazy national election results of 2016!

No discussion questions for this movie

In this super hero origin story a wizard grants to abandoned Billy Batson godlike powers when he is transformed into the adult Shazam by saying the name.
Editor Rating ★★★★★4 out of 5
More Details