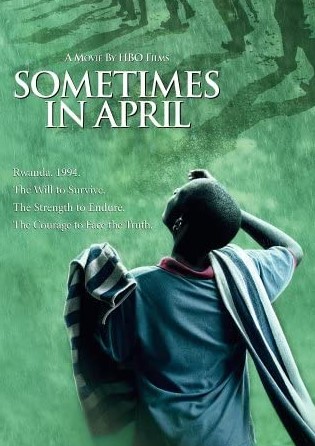 This HBO film, reviewed in the Summer 2005 VP, somehow was not posted, so we post it now to accompany the review of the similar-themed FARHA. 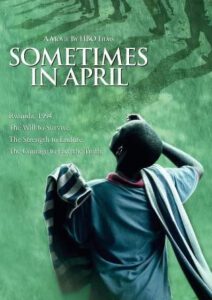 Haitian writer/director Raoul Peck, who gave us the wrenching movie Lumumba, also an HBO movie set in Africa (thank heavens for HBO!), covers in his film ground similar to that of Hotel Rwanda–the horrible 100 day period in 1994 when over 800,000 Hutus were murdered by the Tutsis in Rwanda. The films overlap in some places, but Mr. Peck’s offers a somewhat different perspective on the events, his protagonist Augustin Muganza  (Idris Elba) being complicit in the massacre, at least at the beginning, because he was a captain in the Hutu army. His brother Honore (Oris Erhuero) is far more deeply involved—he is one of the radio broadcasters who urges his listeners to “stomp on the cockroaches,” thus fanning into murderous hatred the long suppressed resentment of the Tutsi majority dating back to the colonial days when the Belgians gave preference in the government and the military to the Hutus.

Kigali’s Hotel Mille Collines is shown in the film (the story is fictional, but the incidents depicted are based on eyewitness accounts and shot in Rwanda), but when Augustin goes there in search of his wife and children, they are nowhere to be found. The film begins on April 7, 2004, the 10th anniversary of the genocide, now a national day of remembrance. Augustin is now a teacher with a new love in his life, Martine (Pamela Nomvete), but the past haunts him so greatly that he is unable to fully commit to her. He has not spoken with his brother for ten years. Learning that Honore is now a prisoner in Tanzania awaiting trial for his crimes against humanity, Augustine decides to go and watch the trial and visit him. Honore is the only one who knows how his wife died.

The details of the events leading up to the massacre, of his wife’s fate, and how this now affects Augustin and Honore unfold in riveting detail. The many acts of courage and love of the few shine brightly amidst the darkness of those whose hatred led them to commit such horrible atrocities. All that he hears in court, from his now penitent brother, and a witness scheduled to testify, convinces Augustin that the trials are important. Back in Rwanda the people also are dealing with their past by confronting in special tribunals the men who murdered their loved ones.

The film also shows that there were voices outside Rwanda urging intervention. Debra Winger plays a State Department official arguing against superiors who feared another Mogadishu if the U.S. tried to intervene. Seen alongside the better-known Hotel Rwanda, the film makes a convincing case that the West, and the United States in particular, could and should have done something to stop the killing. We may boast of the global village created by our electronic media, but all the gadgetry of the world thus far has failed to make the world a safe place for its inhabitants. That is a matter for the heart and will, rather than of the mind and invention.

Scene for teaching/preaching: At the Catholic girls’ school where Augustin’s daughter is enrolled a searing drama of solidarity and heroism unfolds. Their teacher Martine (Pamela Nomvete) keeps the girls calm inside their classroom as the Hutu soldiers rampage through the compound outside. When they break into the classroom, the girls huddle together. The officer demands to know who are Hutu and who are Tutsi, the implication clear that the Hutus can go freely and safely. One by one the girls and their teacher reply, “Tutsi.”  Not one of the Hutu girls is willing to turn in those whom she regards as her sisters to save her own life. The soldiers slaughter Martine and all of the girls.

Question to ponder: In the light of what happened to the girls at the school and to the people who sought refuge in a church, what are we to make of Psalm 27 and its claims?

A mixed group of women, locked into a cellar for safekeeping during the Rwandan Genocide, must find ways to get along despite their hostile feelings.
Editor Rating ★★★★★5 out of 5
More Details