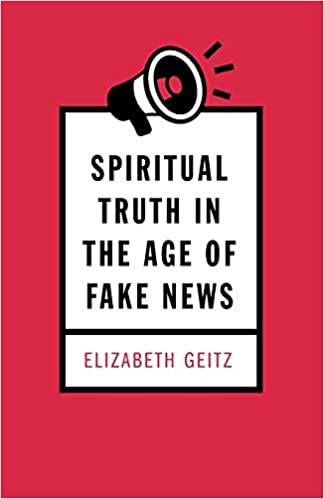 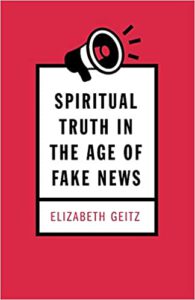 Episcopal priest Elizabeth Geitz has written a helpful book that I will be placing beside my long-cherished copy of  Jim Hill and  Rand Cheadle’s excellent 1996 THE BIBLE TELLS ME SO: Uses and Abuses of Holy Scripture. Though not as highly decorated (4 illustrations  as compared to a 100 or so in the older book), Rev. Geitz covers more territory, and is written in such a way that it can be used as a devotional as well as part of a serious study of the Bible and the way it is used and misused. She uses the now familiar (and politicized) term “fake news” as referring not just to the media, but to the far older practice of misguided souls using the Bible to say things that are contrary to what Jesus taught and lived.

Along with the 101 reflections, there is a short Reader’s Guide and an Epilogue helpful to planners and leaders of a group study. Individuals might want to read one meditation at a time, most being just a page, with the longest a page and a half. All of them begin with a particular Scripture passage, and all but four end with questions that challenge the reader to think more and then to do something in regard to the subject. This makes the book into a dialogue. Rather than just a collection of one-way assertions by the writer. And don’t let my use of the term “meditation” mislead you into thinking these are a series of pious readings. Many of them are polemic in advocating the rights of women, African Americans, LGBTQ folks, and immigrants—and yes, of Jews also.

To show the scope of this small (185 pp) but comprehensive book, here are the topics from the Table of Contents:

I thought I was familiar with most of the feminine images of God in the Bible, but she showed that I am just at the beginning of discovering how many times the writers describe God acting in feminine ways—in Deuteronomy, Job, Psalms, Jeremiah, Matthew, Luke, Galatians, 1 Thessalonians, Hebrews, and most of all, in Isaiah. Her readings are short, but long, and scholarly, enough in “Women Leaders” to prove how important women leaders were in the early church, and at times, even in Old Testament times.

The author uses just one movie, On the Basis of Sex, the dramatized life of Ruth Bader Ginsberg, as an example of how the second creation story in Genesis advocates the equality of men and women. This makes me wish she had brought in more, though she does cite the novel made into a movie, The Shack, in her description of the feminine within the Trinity.

She introduces each topic with a quotation from what I would call the Enemy: Billy Graham, using only Masculine images of God; Phyllis Schlafly condemning feminism; Pat Robertson. For Racism she adds a touch of humor by pairing the following two quotes, “If Obama weren’t black he’d be a tour guide in Honolulu, or he’d be teaching Saul Alinsky constitutional law” Rush Limbaugh—“I don’t believe Rush Limbaugh has a racist bone in his body” Mike Pence.

I will be keeping this book, first having read it for enjoyment, and then returning to it later when, as I often do while writing a film review, need to find a Scripture passage for a feminine description of God. There is also a helpful Scripture Index and for those who want to pursue a subject more deeply, an 8-page Bibliography. No “Fake News” in this book; just Good News for all who seek the truth about Scriptures!

This review is from the August 2020 issue of Visual Parables. Other items in this issue that do not appear in the Film Reviews is Doug Sweet’s reviews of film resources (also including books); the Lectionary Links for preachers that link a Common Lectionary Text to a film; and special articles, such as the on-going series on the Paulist Pictures’ famous TV dramatic series, INSIGHT, short dramas very useful for Sunday School classes and other groups. Check out the journal elsewhere on this site and consider subscribing.