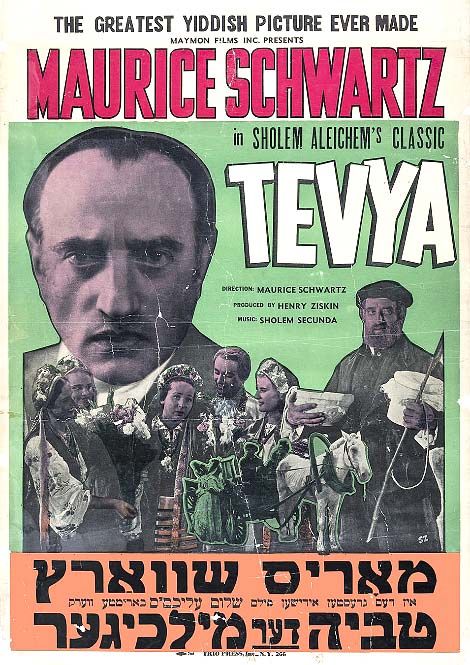 I say to God, my rock, “Why have you forgotten me? Why must I walk about mournfully because the enemy oppresses me?” 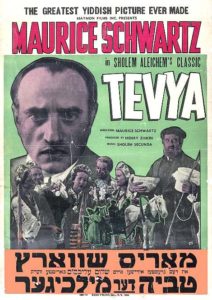 Long before there was the musical Fiddler on the Roof, there was this drama, filmed on Long Island by director Maurice Schwartz, who also starred in it. As with Fiddler, it is inspired by the stories of Sholem Aleichem and a popular Yiddish New York City play. The film was made in 1939, even as the filmmakers’ relatives were being rounded up in Germany and Hitler was poised to spread his vicious hatred of Jews to other nations, resulting in the outbreak of the Second World War in September of that year.

The movie, though it includes a widowed daughter with two children and the unmarried Chave (Miriam Riselle), centers on the issues the Russian-Jewish milkman faces when his Chava falls in love with a the socialist Gentile Fedya (Leon Liebgold). Tevya, of course, explaining that her marrying her lover would be apostasy, forbids her from seeing again the Gentile, but Fedya is also persuasive.

An important character in the rising conflict, left out of Fiddler, is the local priest (Julius Adler), who pays Tevya supposedly friendly visits. He has already presided over one marriage in which the Jewish bride had to convert from her ancestral faith, so we come to see him more like a predator collecting Jewish scalps than a promoter of a religion of love.

The film’s Tevye is also comical, often misquoting the Scriptures, or when he gets one right, quotes it in the wrong context. Yet, he is the strong patriarch who stands up to the priest and to his daughter’s desires. His is a more lonely position in that his family is the only Jewish family in a cabin outside the village of Boyberik. He is a tragic figure in that he is torn between his love for his daughter and his under-siege faith and his eventually being expelled from the area, thanks to another pogrom.

However, the ending is quite different from that of the Broadway play and the 1971 film, the latter two being addressed to a mixed audience of Gentiles and Jews, rather than produced by and for the Yiddish-speaking community.

The film, even without heart-stirring songs, is very moving. It’s slight flaw is the tendency of the actors at times to forget that they are being filmed rather than acting on a stage. Thus, on occasion some of their expressions and actions are broader than they should be. This seems especially the case of Miriam Riselle, who plays Chava. Despite this, the film is well worth your going to YouTube. It, like the later version, well portrays the results of blind prejudice and the tension between tradition and the love a father and daughter. I am grateful to the documentary Fiddler: Miracle of Miracles for bringing it to attention by including a clip from it. Director/actor Maurice Schwartz, who acted in numerous mainstream films between 1910 and 1953, deserves to be remembered, and thanks to his 1939 contribution to our understanding of the Ukrainian milkman, will be.  IMDB informs us, “ In 1991, Schwartz’s film Tevya (1939) was selected by the Library Of Congress to be added to the National Film Registry as one of the great American films of all time.” Can a film gain any better recommendation?

To watch the film, click on YouTube. or for the DVD, check with the National Center for Jewish Film .

Based on a Yiddish story by Sholem Aleichem, this centers on the conflict between the Russian Jewish milkmn Tevya & his daughter Chave's desire to marry a Gentile.
Editor Rating ★★★★★4 out of 5
More Details