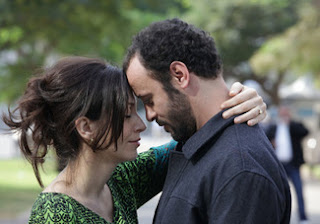 Secular Arabs Shamin and Amin seemed like
a happy couple accepted b Israeli society.
(c) 2012 Cohen Media Goup
The heart is hopelessly dark and deceitful,
a puzzle that no one can figure out.
Jeremiah 17:9 (The Message)

In this adaptation of the novel by Yasmina Khadra (pen name of Algerian author Mohammed Moulessehoul) filmmaker Ziad Doueiri’s immerses us in an alien culture, leaving us at the end pondering why someone unexpectedly does the inexplicable. Co-written with Joelle Touma, this is a dark and troubling film about a dark and troubling situation—the hostile relationship between Israelis and Palestinians.
Dr. Amin Jaafari (Ali Suliman) is a Palestinian surgeon who has chosen to live and work in Tel Aviv because there are greater opportunities there than in his Arab homeland. He has put aside his Muslim heritage, so he feels very much integrated into Israeli society. Most of his friends are secular Jews. He is about to be given the highest honor for a surgeon, but he is disappointed that his wife Siham (Reymond Amsalem), a secular Arab Christian, is not with him on the night of the award ceremony, she insisting instead on visiting her grandfather in Nazareth.

In the darkened auditorium, moments before the presenter calls out his name, his cell phone rings. Annoyed at the intrusion, he says that he cannot talk, and hangs up. In his acceptance speech he points out that he is the first Israeli Arab to be so honored, proof that integration of the two hostile cultures is possible.
The next day he and his colleagues, hearing a bomb blast at a near by café spring into action when the victims are brought into their hospital.  One bloodied man insists on a Jewish doctor when he sees Amin standing over him. Seventeen people, most of them children attending a birthday celebration, are killed, and even more are wounded and maimed.

In the wee hours of the morning, summoned back to the hospital, Amin is shocked when he is told that his wife was killed in the attack—and that she is accused of being the bomber. Already devastated by the sight of her half-blown away body in the hospital morgue, he collapses for a moment. He refuses to believe that such a loving woman could have blown up herself and so many children and adults. He is certain, he tells Captain Moshe, his harsh Shin Bet interrogator, that she kept no secrets from him—and she is a Christian, not a fanatical Muslim. He himself neither practices his religion nor is engaged in any political cause.

However, the relentless policeman marshals the evidence, while at the same time interrogating the doctor as if he were a part of the plot. After the suspicious police confirm that he was not involved, Amin is released but quickly finds his life up-ended.  Dismissed from the hospital where he had been so recently honored, now only two friends stand by him, Kim Yehuda (Evgenia Dodina), a hospital colleague and Raveed (Dvir Benedek), a police official. The vandalization of his apartment is symbolic of his new status. Then comes the letter written to him and posted from Nablus in Palestine by his wife the day before the bombing.
As a result of that letter Amin sets forth on his parallel spiritual and physical journeys back briefly to his wife’s hometown of Nazareth where he learns that she had not gone there after all. He then pays an unannounced call on his family in Nablus where he intends to confront the person responsible for convincing his wife to commit her terrible deed. The taxi driver transporting him disturbs him by playing a cassette tape containing a tirade of anti-Jewish hate by a Nablus Moslem cleric. Arriving in the Arab city, Amin is disturbed to learn that Siham is considered by the people as a heroic martyr to their cause of liberation from the Israeli occupation. Large posters with her picture are plastered on all the walls, and children are selling postcard-size pictures of her.

His sister is glad to see him, though she reminds him that it has been a long time since he has visited or written to the family. His brother-in-law at the supper table says he is very proud of Siham, and his niece wonders what it is like to live among “them.” His elusive nephew Adel, who admits to being with Sahim on her last night, says, “Something snapped in her head.” They and others whom Amin subsequently meets think that he might be working with Israel’s Shin Bet. Thus Amin is a stranger in his own land, caught between the conflict between the two peoples. In between all this there are flashbacks to happier days with Sahim. In one of these they are on a motorcycle, she sitting behind him in her white wedding dress clutching his waist. He is all the more puzzled at how this seemingly loving woman could have committed such a hateful act.
At the local mosque he tries to talk with the Moslem cleric whose diatribe he had heard on the taxi radio/cassette player, but the security guards stop him. Later in the night, when he manages to catch the sheikh on the street, the man says, “We are a ravaged people fighting for our dignity with whatever we have.” He also warns him to leave town.

Amin expects that from a Muslim radical, but even an Orthodox Christian priest, admiring Sahim’s deed and wishing that he had met her, tells him, “We’re not Islamists and we’re not fundamentalists, either. We are only the children of a ravaged, despised people, fighting with whatever means we can to recover our homeland and our dignity.” Even his visit to the ruins of Jenin, a Palestinian refugee camp where the Israeli Defense Forces in 2002 fought a bloody battle with PLO militants, resulting in rumors and claims of “a massacre,” does not explain Siham’s double life that he now realizes she had led. She had never talked about politics or expressed criticism of their Jewish friends.

Amin confronts a truth so terrible that it will scar him forever, making him an outsider to both Israelis and to his Arab family. His fall from grace with his Jewish friends—even Kim is exasperated because he will not go and tell the Shin Bet what he has learned in Nablus—and his anguish that he did not really know the person whom he loved the most will haunt him forever. Did his obsession with his career lead him to neglect his wife and thus caused her not to confide in him her deep concern for their people? Or could his apolitical withdrawal from the conflict raging around him have prevented her from raising her concern over the suffering of their people at the hands of the Israelis?

One of the most spiritually challenging films of the year, Lebanese-born Ziad Doueiri’s film is as helpful for understanding the Palestinian viewpoint as was the 2005 film about two friends preparing to become suicide bombers, Paradise Now, a film in which Ali Suliman co-starred as one of a pair of friends volunteering to become suicide bombers. It would seem that the conclusion of Jeremiah and of our searching surgeon is the same; the human heart is a puzzle with no answer sheet. The film is somewhat like Steven Spielberg’s Munich in that its maker tries to be even-handed, condemning neither one side nor the other—and yet is attacked by both sides. The Arab League was so upset that Doueiri shot the opening scenes in Tel Aviv that the members banned the film in all 22 of its member nations. Thus the tragic conflict goes on and on, with not even the movies able to bring the two sides together. (We will have to see if Secretary of State Kerry’ peace efforts can begin to bridge a gap wider than the Grand Canyon.)

For Reflection/Discussion
1. Most Americans know only the Israeli version of the birth of Israeli, so movingly told in the novel and its movie version Exodus. It is well known that a coalition of Arab countries attacked Israel as soon as it became independent in 1947, but less known are the terrorist acts of Zionist groups against the British occupiers in the 1930s and 40s, as well as against Palestinians. For more information on the troubled past go to:
http://en.wikipedia.org/wiki/Israel and http://en.wikipedia.org/wiki/Irgun.
Also for an article on Zionist terrorism directed at the British during their Palestine Mandate from 19222 to 1948 see “Kidnappings, Beatings, Murders and Hangings: Attacks by the Irgun and Stern Gang.” This is part of a site called Exodus and Outrage dedicated to telling the story of British soldiers in Palestine and many other nations.
http://www.britains-smallwars.com/Palestine/kidnap.htm
2. As an Arab living in Israel what has Amin had to do in order to be successful? How might this not have set well with his wife? In what ways is this another tale of an outsider?
3. How does he view his journey back to his hometown? How could it be considered a journey into darkness?
4. Were you surprised that the people of Nablus considered his wife a heroine? What suggestions are there for her reason for deceiving her husband?
5. Amin visits the site of the Jenin Refugee Camp where many people, Arabs and Jews, were killed by both sides in April 2002 when the Israeli Army moved in and put it under a round-the-clock curfew. Given all the biased, exaggerated reporting by Palestinians as to the number of casualties, how might this have affected Siham? For a report on the camp and the fighting see the UNRWA report at: http://www.unrwa.org/etemplate.php?id=118
6. Do you think there can be a rational explanation for Siham’s behavior? What about Amin’s friend Raveed’s statement: “It can fall on you like a tile or grow in you like a worm. Then you don’t see the world in the same way. You’re just waiting for the moment to cross the threshold.”
7. There is more to the Jeremiah quote. Reflect upon it in regard to the film:
But I, GOD, search the heart
and examine the mind.
I get to the heart of the human.
I get to the root of things.
I treat them as they really are,
not as they pretend to be.”
8. The impasse between Catholics and Protestants in Northern Ireland once seemed as intractable as that between Israelis and Palestinians: what happened there that led to the cessation of terrorist attacks by the IRA and the brutal reaction of the British forces? Do you think that can happen in the Middle East? What do you know about the peace movement, among Jews and among Palestinians? (Note that in the documentary film The Power of Forgiveness and its accompanying book there are several sections exploring this.)
9. There is a video of Charlie Rose’s good interview of the director at:
http://www.imdb.com/video/hulu/vi4204112153/