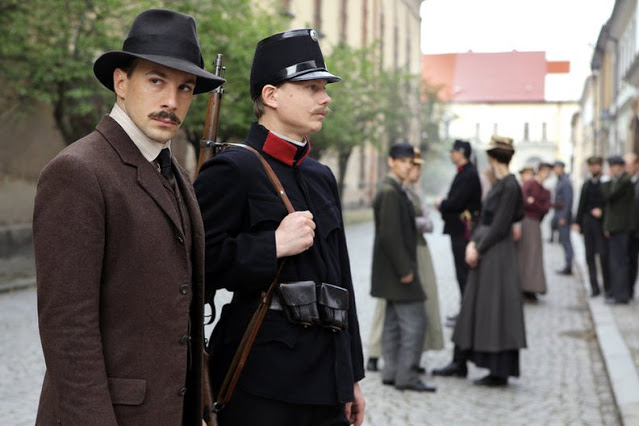 Why do the nations conspire,
and the peoples plot in vain?
The kings of the earth set themselves,
and the rulers take counsel together,
against the Lord and his anointed…

Austrian director Andreas Prochaska gives us an interesting new slant on the origins of World War One in this speculative story unfolding in the city where the infamous assassination set in motion the Great War. The film features a lowly hero/outsider who runs up against a powerful consortium of greedy capitalists and German nationalists who believe that a war is necessary for Germany to dominate Europe. For them the sacrifice of a royal couple is a small price in order for the immense gains the assassination will bring.

Dr. Leo Pfeffer (Florian Teichtmeister), an examining magistrate in Sarajevo, is fastidious in his morning grooming for work. Although he is a Croatian who (or his family) has converted to Protestantism, his superiors are well aware of his Jewish roots. Some of them hold him in contempt for it, believing that Jewishness is a matter of blood, not of belief. On June 28, 1914, the day that Archduke Franz Ferdinand of Austria is in Sarajevo with his wife, Sophie, Dr. Pfeffer is riding his bicycle through the crowded streets to work.

The camera switches to shots of nervous young men dispersed through the crow. The automobile comes into view, and a bomb is hurled at it. The bomb goes off, but the couple are unharmed. The Austrian authorities (the city has been torn from Bosnia and Austrian soldiers stationed there) summon Dr. Pfeffer to examine the suspect who has been captured, but as they are speaking, we see that the royal couple  continue on their journey. The car makes a wrong turn, and we see another young man with a pistol. Sophie is hit first, and the Archduke rising to protect his wife, is also shot, the bullet killing him.

Certain that Serbia is behind the plot, the Vienna authorities quickly summon Dr. Pfeffer to investigate the event to bring out the facts. Pfeffer is Croatian, and so he is used to add veracity to a foregone conclusion. However, as he interrogates the six prisoners, some of whom are tortured, their stories do not add up. They cannot give details of their supposed trip over the mountains from Serbia. Other “facts” do not match. During his investigation he goes to the mansion of a wealthy Serb who had loaned the car used by the visiting royal couple. He meets the man’s beautiful daughter  Marija Jeftanovic (Melika Foroutan), and there is a mutual attraction between the two.

The more Pfeffer investigates, the less certain is he of the assumed guilt of the Serbian government. He wonders why so few soldiers were on hand to guard the visitors. Why was the route published in the newspapers? Such a great aid for the plotters. He learns of plans by financiers of a railroad connecting Berlin and Bagdad. The railroad would cross through Serbia, hence Austria and Germany’s desire to take over that nation. Also a longtime friend a German military doctor Dr. Herbert Sattler (Heino Ferch) with whom he formed a friendship, that Germany is planning to overtake Paris within a month. Pfeffer finds himself resisting the demands of his superiors to produce a finished report charging Serbia with plotting the royal couple’s murder. He equivocates and postpones, even when a high ranking German official arrives in the city to insure that the damning report is signed and published. The German government needs his report so it can justify to a skeptical world its invasion of the small nation. What can a man of integrity do in the face of such powerful forces demanding that he lie. As the various nations of the continent posture and jockey for power, we can well imagine the hapless magistrate crying out the question that opens Psalm 2.

The film was co-produced by TV channels from Austria, Germany and the Czech Republic  to commemorate the start of WWI, exactly 100 years before its 2014 release. Apparently not wanting to create another docudrama,

screenwriter Martin Ambrosch was brought in to flesh out an alternative theory as to why the nations rushed toward the suicidal conflagration that destroyed so many millions of their citizens and so much property. I don’t know enough about the history of the times to be able to judge how plausible it is, but it is evident that the filmmakers went to great trouble to portray accurately the times. The costumes and detailed street scenes are so fascinating that I find myself wanting to go back and watch them to see the children playing, cars and horse and buggies mixing together, and adults going about their business.

The development of Dr. Pfeffer as a man of character shouldered with a monumental responsibility is well dramatized. And we see how insidious and  embedded in European society is anti-Semitism, a poison that will thrive and grow so powerful that it will lead to the murder of millions in the next world war. I suspect that the revisionist history is about as accurate as Oliver Stone’s fanciful J.F.K., but nonetheless I enjoyed the film and am grateful to Netflix for bringing to us a film of which we might not otherwise have been aware.

After the murder of Archduke Ferdinand & his wife a lowly magistrate in Sarajevo is pressured to agree that Serbia is responsible, which gives Germany & Austria the excuse to invade that nation in what they expect to be a short war.
Editor Rating ★★★★★4 out of 5
More Details