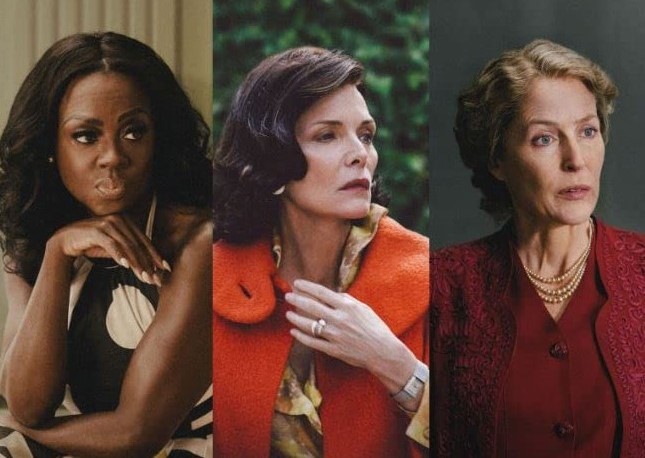 A woman of strength who can find?
She is far more precious than jewels. The heart of her husband trusts in her,
and he will have no lack of gain.
She does him good and not harm
all the days of her life. 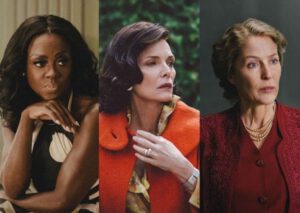 The ten-part series The First Ladies takes full advantage of the opportunity that a TV series offers to explore details of history not possible in a two-hour movie. Created by Aaron Cooley and executive-produced by Viola  Davis, it explores the lives and legacy of three wives who called the White House their home– Eleanor Roosevelt, Betty Ford, and Michelle Obama, respectively played by Gillian Anderson, Michelle Pfeiffer, and Viola Davis. Although many critics have not been kind to the series, my son and I have found it fascinating and inspiring viewing.

Viewers must keep alert as to the time frames due to the jumping around between the ladies and their times. Thus we see how Eleanor started out as a shy debutante refusing to dance with a young Franklin, despite his being related to the recent president, Teddy Roosevelt. Her eventual marriage and support of him when he became crippled by polio and her struggle against his smothering mother Sara Delano Roosevelt (Ellen Burstyn) are well told. Also her heartache at his betrayal, resulting in their unconventional marriage in which she forged her own career as writer, philanthropist, and champion of women’s and civil rights for African Americans. (Wish that her support of singer Marian Anderson and the Tuskegee Airman had been depicted!) Drawn to a female journalist, she ends what could have been a ruinous affair, and then after her husband’s death is shocked that he had not kept his promise to end his affair with Lucy Mercer Rutherfurd (Maria  Dizzia ).

Of the three women, Betty Ford was probably the least enthusiastic about being a politician’s wife. We see her planning their retirement home after Gerry’s (Aaron Eckart) long service as a Michigan Congressman seems to be at its conclusion, so when the Watergate scandal forces President Nixon to resign and the Vice Presidency is vacant because of the resignation of the corrupt Spiro Agnew, her husband is next in line because of his rank in Congress. She gamely goes along and quickly has to assert herself when his handlers don’t think she is competent to administer a state dinner. Her struggle with her health—and at times against her own family when they perform an intervention– and her candor with the public win our admiration.

Michelle Obama, like Betty, was not thrilled about her husband’s political career, but certainly threw herself into supporting him and finding her own niche in the administration while insisting that they would do everything possible to raise their two daughters as normally as possible. I loved the scene in which Laura Bush is giving Michelle the traditional White House tour and Michelle, who evidently has done her research, goes to a wall and is able to open a secret doorway once used by the servant slaves—I hope this was true. The many times we see the pair interacting with the Black servants, and of course, with their two lively daughters, are charming. New to me was the struggle she had to wage, even against her husband’s transition team, she protesting, “They want to make me into a Martha Stewart!”

The first part of the Proverbs passage suits well these three First Ladies—each of them was indeed a “woman of strength”– but not the passage’s patriarchal latter half. Each of these women had skills beyond the domestic ones praised by the male author of this passage. Can you imagine the strong woman called upon by her husband to be the first to address the nation after the infamous attack on Pearl Harbor, even before he spoke to Congress the next day, just decorating the White House and standing meekly beside her husband at official gatherings? Or law-trained Michelle with a career of her own before marrying the ambitious community organizer, just sitting back and raising their daughters. And how indebted millions of women should be to Betty and her honest airing of her health struggles against addiction and cancer and her founding the Betty Ford Foundation!

I am not sure what the series’ disparagers were looking for, and I do not know how much is historical and what was made up, but I found the portrayals inspiring and convincing. There is no doubt that Michelle Pfeiffer’s is an amazing performance, but I enjoyed the other two actresses’ performances as well. If the three women had anything in common, beyond their marriages to the most powerful politician on earth, it is their refusal to fit into the mold others would force on them, their insistence on being their own persons. This, of course, is a struggle that all women in our patriarchal society have faced, some rising to the occasion and others sinking into servility, so I hope that especially you who have daughters will watch with them. Here are three good role models, each in her own unique way having blazed a trail for young women to follow.

This review is in the July issue of  VP along with a set of questions for reflection and/or discussion. If you have found reviews on this site helpful, please consider purchasing a subscription or individual issue in The Store.

This limited series explores how 3 First Ladies--Eleanor Roosevelt, Betty Ford, & Michelle Obama--struggled to form her own role in the White House.
Editor Rating ★★★★★5 out of 5
More Details