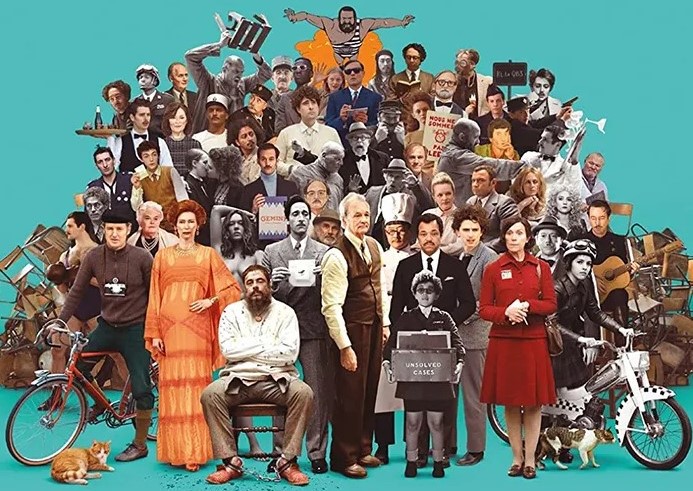 The director of The Grand Budapest Hotel is back, and with another film even more quirky that serves as an homage to The New Yorker Magazine. In a voiceover (Anjelica Huston) we are told, “The French Dispatch of the Liberty, Kansas Evening Sun took its cues for 50 years from the guidance of one Arthur Howitzer Jr.” There is no attempt to explain how a newspaper in a small midwestern town could support a literary journal in a far away country, but reason and rationality need not apply in a Wes Anderson film.

Set in the make-believe city of Ennui-sur-Blasé, the fictionalized “New Yorker” is closing down because its founder and only publisher/editor Arthur Howitzer Jr. (Bill Murray) has died. The film is in effect the magazine’s last issue brought to life, encased within scenes of his loyal staff’s mourning and celebration of his life. All remember his two maxisms, the first an instruction to his writers, “Just try to make it sound like you wrote it that way on purpose” and the second, posted on the wall, about behavior at the office, “No crying”

Before we get to the main stories, in a section called “Local Color”  Herbsaint Sazerac Owen Wilson, wearing a black beret and turtleneck, bicycles through Ennui-sur-Blasé, showing us the sights. He speaks directly to the camera, telling us such intriguing facts that on an average 190,000 flakes of snow fall each year, and an average of 8.2 bodies per week are dredged from the canal. With his eyes focused so much on us he causes a number of collisions during his tour.

The first story “Arts & Artists” is by Arts reporter J.K.L. Berensen (Tilda Swinton) about the bizarre romance between Moses Rosenthaler (Benicio Del Toro) and prison guard Simone (Léa Seydoux). Imprisoned for murder, Rosenthaler is inspired by Simone to paint, his works promoted by scheming art dealer (Adrien Brody). In a delightful parody of an elitist art lecturer, Berensen lectures on the meaning of Rosenthaler’s strange works.

In the second segment “Politics & Poetry” writer Lucinda Krementz (Frances McDormand) becomes obsessed with the chess-playing student activist Zeffirelli (Timothée Chalamet) during the famous student riots of 1968. Whereas the real students were revolting against their educational system, capitalism, and the Vietnam War, Zeffirelli’s cause is for free access to the women’s dormitory. He and Krementz become entangled in a love affair.

The third story “Tastes & Smells” is by Food writer Roebuck Wright (Jeffrey Wright), very similar to James Baldwin, who is being interviewed by talk show host Liev Schreiber. He recounts a bizarre story of kidnapping and the poisoning of food by a prison cook the gifted chef Nescaffier (Stephen Park).

I am not sure what all these whacky tales adds up to, other than absurdist fun. I am sure much of the humor is lost to persons like myself who have only occasionally read the New Yorker—or so I gather from reading the reviews by more sophisticated reviewers than myself. Heck, I can’t even think of a Scripture to relate to this film, let alone some helpful questions. In regards to the first, maybe the famous words of the old Preacher who wrote Ecclesiastes  is appropriate, “Vanity of vanities, all is vanity.”

If you have some extra time, this will provide some laughs. I know I am looking forward to seeing it again in order to pick up what I missed the first time, so much is happening on the screen. And there are so many famous actors in cameo parts that the film would be fun for a group to play “Name That Star!”

With 3 whacky stories set in France & a galaxy of stars, Wes Anderson pays tribute to The NEW YORKER during its golden years.
Editor Rating ★★★★★4 out of 5
More Details