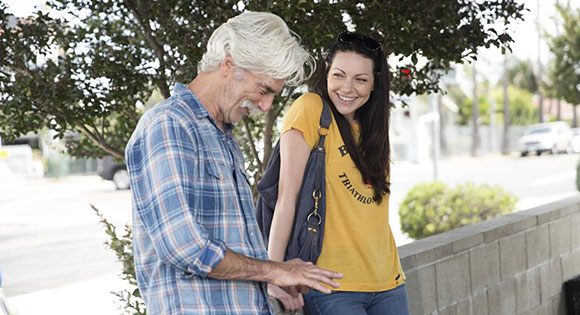 O Lord, what are human beings that you regard them,
or mortals that you think of them?
They are like a breath;
their days are like a passing shadow.

I bought this DVD because of its star Sam Elliott, he with the golden baritone voice—and discovered that it is the latter that is an important plot device in Brett Haley and co-writer Marc Basch’s laconic film. It begins and ends with Elliott’s faded cowboy star Lee Hayden in a recording studio repeating over and over again at the insistence of the director a line extolling Lonestar Barbecue Sauce. In between we follow the downs and ups of a man who might be his own enemy as he attempts to recover his career.

Lee is divorced and estranged from grown daughter Lucy (Krysten Ritter), perennially upset because he was never there for her as she was growing up. Lee spends too much time with his former co-star Jeremy Frost (Nick Offerman) who now makes a living selling Lee and others weed. Lee checks in daily with his agent, but no job offers, just an invitation from an obscure group called the Western Appreciation and Preservation Guild, which Lee shrugs off. They want to give him a “Lifetime Achievement Award” at their upcoming banquet.

At his doctor’s office Lee receives the chilling news that he has terminal stage 4 Pancreatic cancer. With special surgery, he might live for 5 more years. Shocked, he leaves without making any provision for further treatment. He tries to tell his former wife Valerie (Katharine Ross), but cannot bring himself to do so. He calls his daughter and barely convinces her to meet him for a supper. Again, apparently not able to reveal the bad news, he fails to show up at the restaurant.

During one of his weed-smoking sessions with Jeremy, Lee meets another customer, Charlotte Dylan (Laura Prepon). She is an aspiring comedian and apparently is drawn to older men. Lee is uneasy because she isn’t much older than Lucy, but he enters into a relationship with her. Maybe it’s because she quotes poet Edna St. Vincent Millay. Neither of the previous women in his life are willing, so Lee asks Charlotte to accompany him to the award banquet. Following the showing of his most famous film, also named The Hero, his acceptance speech is quite unusual, even if you’ve watched every Oscar speech. Saying that all of them present are as worthy of such an honor as he is, Lee calls up to the stage a middle-aged lady and bestows the trophy on her. Someone in attendance posts the video of his speech, and it goes viral.

Lee’s agent reports that suddenly everyone wants him for their project. One step forward in his life—but also there is a step backward. Lee shows up at the nightspot where Charlotte is booked. Her monologue is based on her dating a senior citizen, and it isn’t flattering. He walks out before she is finished or he can confront her.

Will Lee ace his important opportunity to audition for a new picture? The producer insists on this audition despite Lee’s vast experience. No doubt word of his drinking and drug life has been spread around. Will he and Charlotte reconcile? Not to even mention the daughter he had stood up and the wife he had abandoned?

Some have said the plot is too familiar, which might be so—how many movies about faded stars have you seen through the years? However, the actors do bring a freshness to the plot—and I love the addition near the end of Edna St. Vincent Millay’s great poem “Dirge Without Music.” This insightful meditation on, or rather mild protest concerning death, alone makes the film worth watching. The insertion of clips from Lee’s fictional movie are well placed, making us reflect on Lee’s character. Too often influenced by drugs, he frequently belies the heroic image of his film character—until the ending, which suggests a ray of hope. Most of this film has a Good Friday/Gethsemane mood, but it concludes with a glimmer of Easter.

This review will be in the November issue of VP along with a set of questions for reflection and/or discussion.

If you have found reviews on this site helpful, please consider purchasing a subscription or individual issue in The Store.

Estranged from his daughter & ex-wife, faded Western star Lee learns he has advanced cancer, & then enters a romance with the far younger Catherine.
Editor Rating ★★★★★4.5 out of 5
More Details