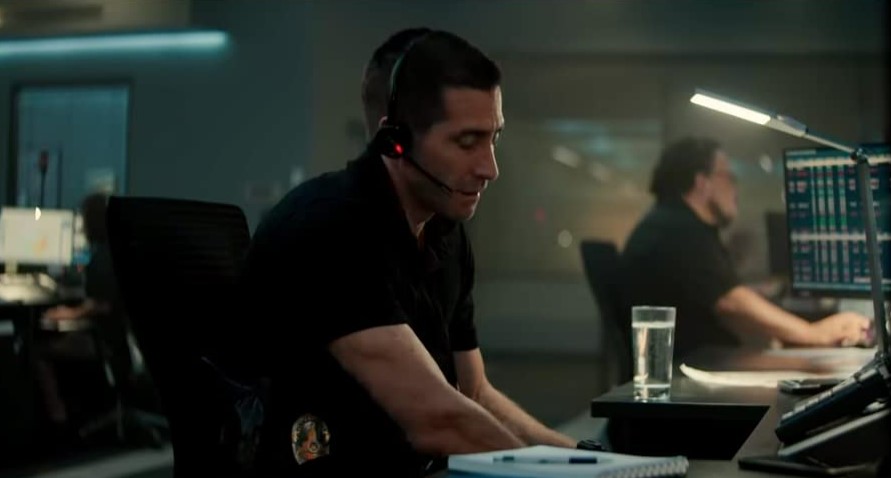 O Lord, who may abide in your tent?
Who may dwell on your holy hill?

Those who walk blamelessly, and do what is right,
and speak the truth from their heart;


And you will know the truth, and the truth will make you free.

Director Antoine Fuqua  and writer Nic Pizzolatto have done a fine job of adapting a 2018 Danish film (which I have not seen) to the American scene. With no explicit references it addresses one of the issues that has drawn into the streets thousands of people concerned that Black Lives Matter. The film is a thriller, a very intense one, but one with a social conscience that deserves to be seen and discussed widely.

The action unfolds over a few hours well after midnight and is confined, from our perspective, to two rooms and the hallway of the Los Angeles’s large 911 Call Center. Joe Baylor (Jake Gyllenhaal) is obviously not happy manning a phone, but he was forced to leave the streets because of a serious charge against him. He snaps at fellow cop Manny and is short with some of the callers, especially those that seem frivolous to him. His supervisor chastises him for taking personal calls, and from the picture of the little girl on the home screen of his phone, we can see that his attention is not focused on his job. We learn her name when he calls asking to say Good Night to Jesse. Also that she is with his estranged wife, who refuses him because it is 2 A.M. She and several others, including his partner Rick, mention some ordeal that he will be facing the next day. That it has wide ramifications is revealed by the several calls he receives from a newspaper reporter who tries to coax out an interview by saying that she wants him to tell his side of the story.

After several banal calls, a woman named Emily (voiced by Riley Keough) is on the line. Joe thinks she is a drunk at first because she speaks in baby talk. Suddenly he realizes that she is pretending to talk to her little girl, named Abby, and that she is trying to fool someone. Now fully focused, Joe, by a series of Yes and No questions he discerns that she is being kidnapped and carried away in a white van. He manages to call her home where little Abby picks up the phone. Over the next few hours Joe must call on all his skills—first with calming Emily and Abby, especially when he learns that Abby’s baby brother Oliver has been stabbed; then, with the CHIP to get them to take seriously his frantic plea to search for the white van on an expressway—they refuse his suggestion that it be shut down, not understanding his urgency.

The van’s driver turns out to be Emily’s husband Henry, so Joe fears that Emily will be next. He convinces his fellow cops to go over and care for the unattended children; and his partner to go to Henry’s apartment and enter it illegally so he can find the license number of the Henry’s van and possibly find a clue as to where the man might be taking his wife.

During all of the resulting turmoil we learn how serious Joe’s troubles are, and how bleak his future might be. He is a desperate, haunted man, and actor Jake Gyllenhaal skillfully makes us feel this by his tone of voice and contortions of his face. (If he isn’t nominated for an Oscar for this performance, there is no justice in Hollywood! The whole movie, with him appearing in virtually every frame, depends on him.) His private purgatory is well reflected on the bank of the center’s large screens where surveillance cameras show hills ablaze with wildfires that light up the sky. They are as out of control as Joe’s own inner turmoil that is spoiling his relationships with his family, his fellow officers, and himself.

During his tense conversations, Joe becomes deeply involved with Emily and Abby. He has promises the latter that he would bring her mommy home—hence the many times that we see the picture of his own daughter Jessica on his cellphone takes on added meaning. We see by his several calls to his wife and the little stranger how greatly he values his role as a father.

The plot takes a sudden, bizarre twist, changing his perspective and adding to Joe’s burden of guilt and the intensity of his mission to reunite mother and daughter.

I wish I could go into this here, but do not want to spoil things for you—I watched the film without reading anything about it, drawn just by general assertions that it is a topnotch film. I will only say that in his desperation to save Emily from acting rashly, Joe runs out of arguments and reveals his own guilt in an unforgettable scene that unfolds like one in a confessional booth. He faces up to his own situation, which will have an important ramification when he talks later with his partner who is to testify for him in the hearing the following morning.

Before the action begins we were shown on a dark screen the words of John 8:32, so by the time that Joe calls his partner Nick and tells him to change his sworn testimony for the hearing and tell the truth, we understand the reason for the quotation. Joe has faced up to his shortcomings and the terrible consequence which resulted from a fit of anger. Rick warns him that if they tell the truth at the hearing, Joe will not be able to see Jesse for several years, but Joe insists that they do so. The truth includes a cross that he must bear, but, as Jesus promised, it will make him free of the burden of guilt that he would had to carry for the rest of his life.

I expected a good thriller, with respected names such as Antoine Fuqua and Jake Gyllenhaal attached to it, but was even more thrilled to find the theology embedded in it, as well as its relevance to the current discussion over police reform. Joe’s is a Good Friday-Gethsemane story that concludes with the promise of Easter! There is even a touch of Henry Nouwen’s “the wounded healer” in the story when near the end of the film, Joe’s supervisor Sgt. Denise Wade, who had been very critical of him, commending him, “Broken people save broken people.” If one takes nothing but this away from the film, it is worth one’s while.

Cynics might well say that such honest facing up to the truth by a cop would never happen in such a situation, but I like to believe that it is possible, that a man in blue can be as concerned for the truth as well as the most refined ethicist. Joe’s immediate future will be bleak, but his long range prospects—as a man and a father—are great. Though his body might face prison time, his soul will be free. This Netflix film is another one not to be missed!