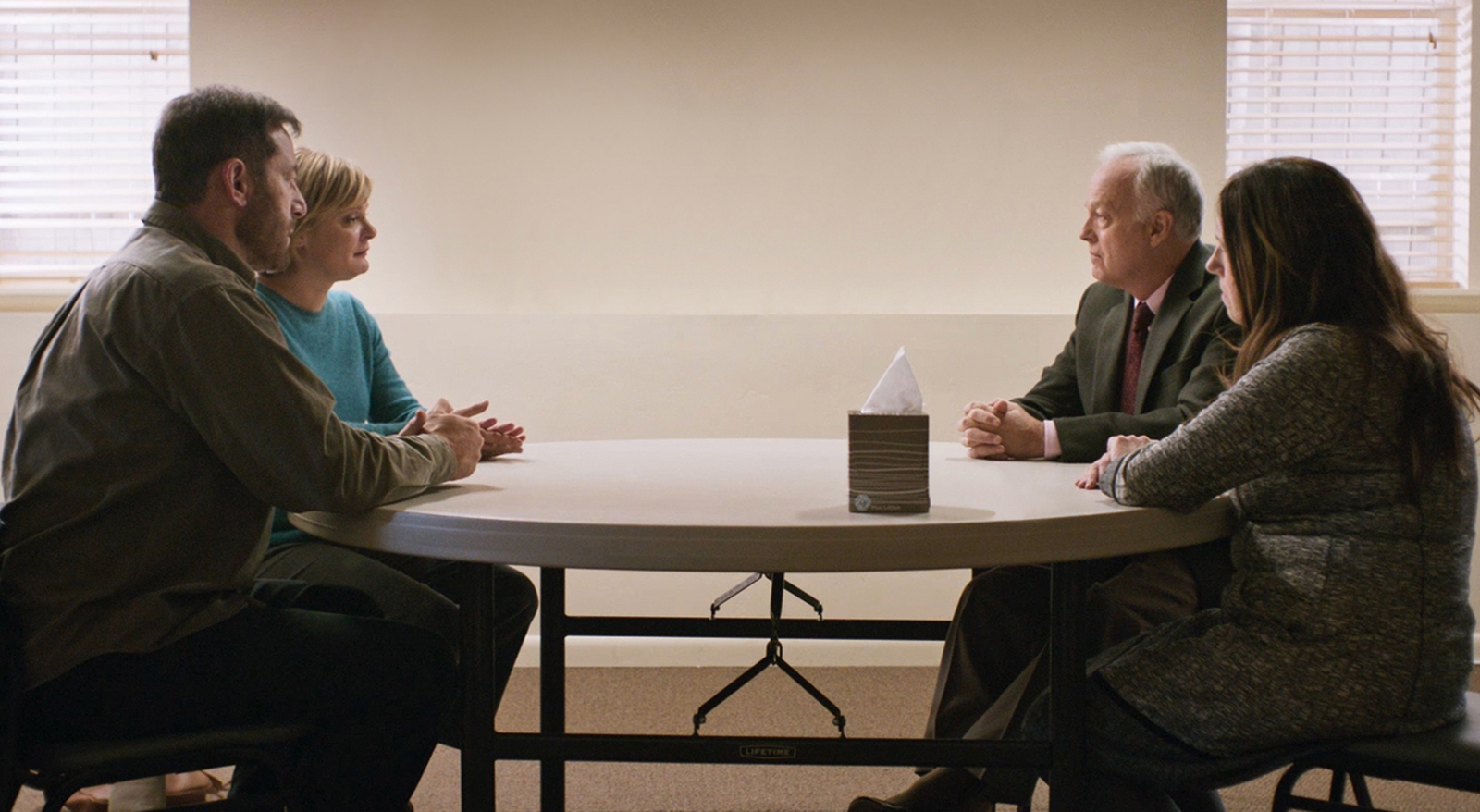 Hear my prayer, O Lord;
let my cry come to you.
Do not hide your face from me
in the day of my distress.
Incline your ear to me;
answer me speedily in the day when I call.

For my days pass away like smoke,
and my bones burn like a furnace.
My heart is stricken and withered like grass;
I am too wasted to eat my bread.
Because of my loud groaning
my bones cling to my skin.
I am like an owl of the wilderness,
like a little owl of the waste places.
I lie awake;
I am like a lonely bird on the housetop.


Like vinegar on a wound
is one who sings songs to a heavy heart.
Like a moth in clothing or a worm in wood,
sorrow gnaws at the human heart.


Hatred stirs up strife,
but love covers all offenses.

Actor Fran Kranz makes his debut as a writer/director in this intriguingly titled film set in a small church. We might think the title refers to the central rite of the church until it is revealed that this is an Episcopal, not a Catholic church. Only as the conversation between the four central characters progresses do we learn of its more ominous meaning. I will say up front–this is one of the best films I have seen this year. I knew nothing about it when the studio sent me a link to the preview, and so as not to spoil the experience for you, I suggest that you stop reading until you can rush out to see it when it opens on October 8.

The first 15 minutes are devoted to a church employee named Judy (Breeda Wool) who, carrying a full grocery sack, enters a small brick church. She pauses a few moments in the sanctuary where a teacher sits at the piano with a boy who is trying to play the hymn “Bless be the Tie.” Going downstairs, she and her assistant begin setting up a room for a meeting. She seems unusually fussy about placing the four chairs at a round table just so, as does Kendra when she shows up to inspect the premises. They make sure there is coffee, water, and some food. They look over the room as if expecting V.I.P.s or diplomats for a world conference.

We see the first of the expected four arrivals, Jay and Gail (Jason Issacs and Martha Plimpton) in their car as they approach the church. Gail nervously tells her husband to drive on. They park for a few minutes across from a fence on which we see tied a long pink ribbon fluttering in the breeze. It is much like those placed by families along a road sides to commemorate the death of a loved one in an accident.

The pair return to the church where they are welcomed by the three awaiting them. All we can discern at this point is that that the couple are reluctant to be there, that they are well known to Judy though she dares not mention the details, and that Kendra has met with them before. Apparently a social worker, Kendra escorts the couple to the meeting room and asks if everything is all right. Jay walks over to the table and replies, “Table, chairs,” and noticing the large crucifix on the wall, “Jesus watching over us. Yes, it’s okay.” Soon the second couple arrive, Richard and Linda (Reed Barney and Ann Dowd). After making sure that everything is suitable, Kendra excuses herself.

All four guests have reached advanced middle age, but there is a contrast between the husbands. Jay has a small scruffy beard and is dressed casually. Richard’s face is shaved, and he is dressed in suit and tie which contribute to what seems at times to be his aloof and defensive attitude. Linda has brought a simple bouquet of flowers in a small bucket which she awkwardly presents and are as awkwardly accepted. They make small talk as if they are afraid to broach the subject that has brought them together. They all are uncomfortable, obviously wanting to be anywhere but in this room facing each other, so that they are as nervous as soldiers forced to walk through a mine field.

They show each other pictures of their sons, refer to some rules that had been set, and Jay mentions that they have no intention into entering into litigation. Gail wants to know more about Richard and Linda’s son Hayden. Linda asks why, and Gail at last gets to the point, answering accusingly, “Why do I want to know about your son? Because he killed mine.” Now we know why Richard and Linda have been more solicitous.

Thus, we learn the occasion that has brought them together some six years after a shooting at the high school attended by their sons. As they exchange hostile comments, we learn more details about the incident, and thus about the film’s title. It was a mass killing, Hayden at first throwing a pipe bomb into a class room and then returning with a gun stolen from a friend’s home to shoot Gail and Jay’s son as he was crawling toward the door, plus several others–ten in all. Then, in the library that he described in his notebook as his peaceful place in the school away from bullying, the boy shot and killed himself.

The exchanges–of accusation and blame, shame and confession–are hot and heavy, and are punctuated by long silences, during which almost as much is communicated as when the four use words. All four share their confusion as to why they have come, admitting that they do not know what they hope to accomplish. Early on when asked to tell everything, Linda says, “I can tell you everything, but there will still be things no one can answer.” Both Jay and Gail let loose their anger. Most pitiable is the sequence in which Linda expresses the thought that it would have been best if her son had not been born, and yet she cannot bring herself to accept that. She desperately wants to find some value in his tormented and destructive life, as well as in that of his victims’. And she is particularly anguished by the fact that the media always report that there were ten victims, ten deaths, when she knows that there were eleven.

I want you to experience afresh one of the most powerful scenes of grief and reconciliation that I have seen in a film, so I will go just a little further in describing their exchanges. Virtually all of the issues raised over the past two decades of mass shootings are raised by one or another of the parents–mental health issues; bullying at school; loneliness; access to guns; violent video games; parental neglect or blindness; failure of school authorities. But the filmmakers refuse to politicize any of this, focusing instead on the four parents, their grief and strong desire to move beyond its crippling effects.

The four actors, usually relegated to supporting roles, shine, each pulling us into their black hole of grief that threatens to ruin the rest of their shattered lives. We can see the longing, the sorrow, the hurt and the anger in their eyes and faces as they struggle with their emotions and words. If there were an Oscar for an ensemble cast, this one would deserve it.

People of faith will be intrigued by some details that I have noticed, having read about ten reviews, that secular critics have either missed or perhaps not deigned important, other than noting that the setting is in a church. First, the hymn being played (badly) by the boy when Judy enters the church at the beginning of the film. Second, Jay’s comment when he sees the wall crucifix that Jesus is “watching us.” Third, the banner in the hallway that we see numerous times as the four are talking with Kendra and Judy, emblazoned with “GOD IS WITH US…” Fourth, close to the end of the film, the choir is practicing upstairs, their song being the same played earlier by the boy, “Blest Be the Tie That Binds.” This time we hear several of the verses. In the light of what Gail says at the conclusion of their meeting, pleading with her husband to go along with her, the first verse takes on new meeting:

“Blest be the tie that binds Our hearts in Christian love/The fellowship of kindred               minds is like to that above.”

And because of what the four of them have gone through together the third verse also takes on fresh meaning:

“We share our mutual woes, Our mutual burdens bear,/And often for each other flows          The sympathizing tear.”

If you have not already taken out a Kleenex, surely you will now!

And fifth, the last shot is one we have seen several times earlier, that long pink ribbon tied to the fence. There is a field behind it, but now it is twilight and beyond we see what could be the field lights of a school. Suddenly they are turned on. Might they remind us of the promise of John 1:5, “The light shines in the darkness, and the darkness did not overcome it.” The scene turns dark, but the lights remain.

I know nothing about the personal beliefs of the filmmaker, but his film could not be more affirming of the power of love and forgiveness to mitigate grief if it had been made by The Sherwood Baptist Church. Whether intentional or not Fran Kranz has created for us a visual parable suffused with a theology of the healing power of grace, g race in Bonhoeffer’s sense of “costly grace.” Some may see this film as a downer, but if so it is because they have missed the signs that Kranz has strewn along the rocky path trod by these four wayfaring strangers.

Two sets of parents, the son of one having killed that of the other, are brought together in a church to work through their grief and hostility.
Editor Rating ★★★★★5 out of 5
More Details