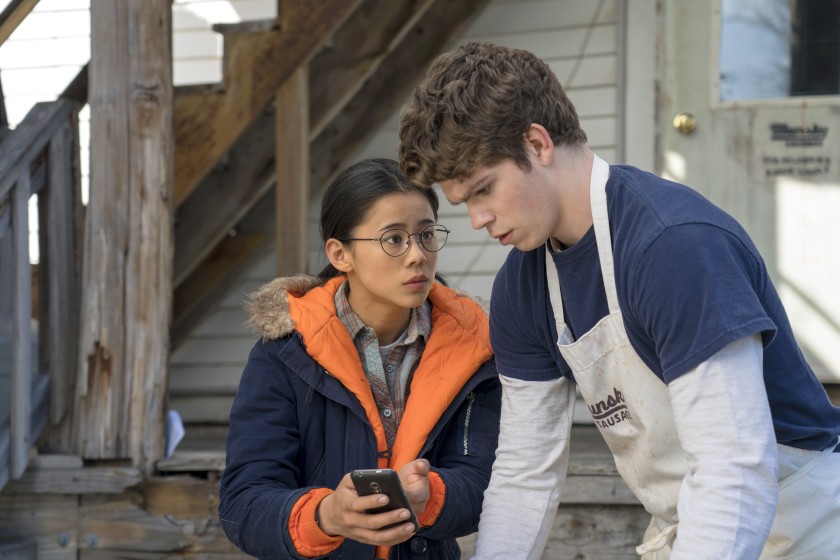 Above all else, guard your heart,
for everything you do flows from it.
Keep your mouth free of perversity;
keep corrupt talk far from your lips.
Let your eyes look straight ahead;
fix your gaze directly before you.
Give careful thought to the paths for your feet
and be steadfast in all your ways.


Do everything in love.

If you are looking for a feel good movie that is also insightful, then director/writer Alice Wu has just the film for you. Centering on three high school seniors, this coming of age film stands far above most others about teenagers that I have seen. The fact that its main heroine Ellie Chu (Leah Lewis) is also discovering that she is gay enhances the value of the film. At a time when so many in our society seek to reject any who are different, Alice Wu gives us a visual parable that subtly teaches the value of inclusion.

Ellie was brought by her father Edwin (Collin Chou) and mother from China to the remote village of Squahamish, Washington when she was a kindergartener. Although Mr. Chu holds a PhD in engineering, the best job he could find was as manager of a railway signal station in the village. His trouble with speaking English has led him to be by-passed for promotion, and when his wife died, he has escaped into a waking stupor, finding refuge in watching classic movies on their TV set. Ellie has assumed most of his duties of station master and signalman for the trains that pass twice a day through the village.

Ellie is an ordinary-looking girl who wears large glasses and dresses with no sense of fashion. She rides to school and about the village on her bicycle, with fellow teenagers sometimes yelling scornfully at her as they pass by, “Ellie Chu chugga chugga chu chu.” She is largely ignored by them at school, but is encouraged by her literature teacher, Mrs. Geselschap (Becky Ann Baker), who apparently is facing burnout because of the lack of response from the other lackadaisical students. She knows that Ellie is being paid by classmates to write their assigned essays, but overlooks this, telling the girl that this is better than having to write the drivel they would otherwise have turned in.

The shy football jock Paul Munsky (Daniel Diemer) offers to pay her $25 to write a love letter to the sweet and pretty Aster (Alexxis Lemire), but Ellie turns him down. When he ups the price to $50, she accepts, because as we have seen, her father is way behind in paying their electric bills. The third teenager in the film is Aster whom we know is sweet, because we have seen her in the school hallway stop to help Ellie pick up her papers, spilt due to a rude student’s bumping into her. The two sense a connection, but part without expressing it.

Thus Ellie becomes Paul’s Cyrano de Bergerac. She is sure the girl will ignore Paul, but she does pen one because of the money. Her eloquent letter features a quotation from one of the films that she has watched with her father, Wem Wender’s wonderful Wings of Desire. We learn that Aster is no bimbo when she answers back—itself  surprise to Ellie– that he is plagiarizer. She also watches classic movies and reads literate novels. (When Paul confronts Ellie with this news, he admits that he had to look up the word.) Ellie writes a response that admits this, and the satisfied Aster continues the correspondence until she agrees to meet him at a café over sodas. This despite her going steady with Trig, a BMoC at school. Everyone in the village, including their families expect the two to marry as soon as they finish high school.

Rostand’s 19th century form of correspondence is cleverly updated by having Ellie sitting in Paul’s pickup from which she can spy the two in the diner. She sends text messages informing the tongue-tied oaf what he should be saying to Aster. She also sends these to Aster in Paul’s name. Accepting his shyness and appreciating the literate text messages, Aster responds positively to his (Ellie’s) words.

Wanting to have more in common, Paul asks for Ellie to tutor him in the books that each of the girls love, such as Remnants of the Day. Aster does not realize how much she and Ellie have in common intellectually, though as I wrote earlier, she senses it.

Matters, of course, will become very complicated, with the once friendless Ellie gaining both Paul and Aster as a friend. Paul visits Ellie’s home and becomes close to Mr. Wu when he shares his Taco sauce recipe, and they cook together in the kitchen. Mr. Wu loves the sauce and teaches the boy how to make noodles, the perfect accompaniment to the sauce. It seems that the boy’s talent is in the kitchen, even though his mother refuses to try his recipe in their family restaurant.

Of course, Aster will at last learn who is the author of Paul’s correspondence. The revelation takes place at a church service where Trig proposes publicly to her, and Ellie, then Paul, speaks out in protest. One of Ellie’s many talents is in music, she earning extra money by serving as the church organist, even though she claims not to believe in God. There is a lovely pastoral scene showing the growing friendship between Aster and Ellie, Aster conducting her new friend to a swimming hole in the woods where the girls soak up the sun and other beauties of nature together. All this comes to an abrupt end as the angry Aster slaps Paul in front of the congregation. Not to fear, though, Ms. Wu will bring everything to a delightful conclusion—there is even a repetition of a scene set on a departing train from one of the movies that Ellie had watched with her dad.

I love a film that appeals to the mind as well as the heart. There are references to such movies as Casablanca, and His Girl Friday, as well as the Wem Wender’s great film. Plato, Camus and Sartre are referenced, the latter being in connection with the Frenchman’s play No Exit the kids are introduced to in Mrs. Geselschap’s literature class. (Her choices are far more sophisticated than what we were assigned in high school!) “We are the source of our own hell,” she says, a truth the kids will soon learn.

The Greek philosopher’s teaching informs the opening cartoon sequence. It  is an illustration the Greek creation myth from which the film’s title comes. When humanity was created we had four arms and four legs, and two heads. The gods grew jealous of us, and so divided the human, the result being that each of the two halves spent its life trying to find and reunite with “the other half.” Ellie refutes this as she grows in wisdom and self-understanding.

It is commendable how Ms. Wu has each of our three characters grow during the course of the story. Ellie realizes and accepts her sexual nature and eventually concurs with her teacher’s advice to fill out and act upon the application to a major university, thus shedding her former apathy. And at first Ellie had helped Paul out of financial need, but as she gets to know him, her help is, as the apostle Paul wrote, “out of love.” Not erotic but friendship love. Paul learns to push back against his other’s rejection of his cooking talent. Especially when he discovers that Ellie has been writing to various newspaper food critics about it. He also moves from his religious Fundamentalism—he had told Ellie that being gay was a sin—to an acceptance of her as she is. He is the friend who acts the fool at the train station where he enthusiastically sends her off.

Even The hermit-like Mr. Wu climbs out of his pit of inactive grief, urging his daughter to enroll in college. He once again assumes his duties as stationmaster.

The reconciliation between Ellie and Aster is also touching, with each looking forward to a future beyond the narrow limitations of their small village. Ellie may still be regarded by much of the world as an outsider, but we know that she will always have two friends who love and support her. Love is, as Ellie says at one point to Paul, the effort you put in. Paul was learning this by staying with the book that he does not understand, which because it is important to Aster, he continues to struggle with.

The sequence in which Ellie and Astrid paint on a wall is also intriguing. Astrid, who has a talent for sketching and painting, will discover that art will be her ticket out of the smothering town where everyone assumes she must marry Trig and become a dutiful housewife.  Ellie says that “you can have a good painting, but to make it a great one you need to make a bold stroke.” This the film applies to friendship as well, as we see in the church scene in which Ellie boldly objects to her friend’s accepting a marriage with a boy with whom Astrid has nothing in common except that they were born in the same town.

A paeon to friendship, rather than romantic, love, this is a film that will leave you feeling much better about our crazy world and its youth. Th more I think about it, the more I am glad of my random choice while browsing through Netflix to watch it. You cannot go wrong if you too choose to watch it.

Chinese American Ellie is an outsider at high school who writes love letters & texts for shy Paul who is in love with Astrid. Ellie also is attracted to Astrid. The tale ends in friendship & new purpose for each of the 3.
Editor Rating ★★★★★5 out of 5
More Details