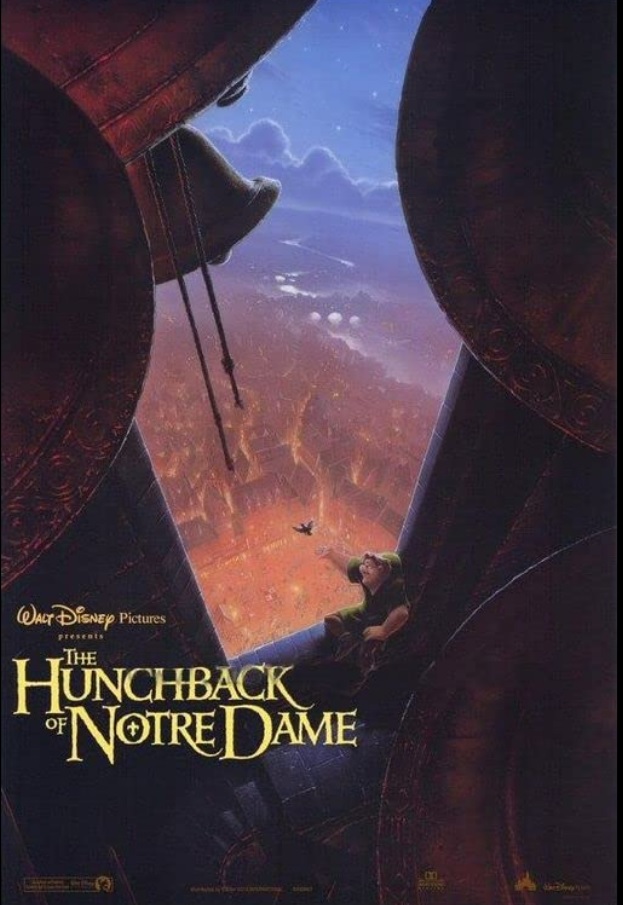 An article in the New York TIMES reminds me that this week marks the 25th Anniversary of the release of one of the Disney Studio’s finest animated films, The Hunchback of Notre Dame. And so I have retrieved from the July 1996 issue my review of the film, one that still is relevant in its espousal of concern for society’s outcasts. The review below is modified somewhat for clarity, and the two relevant Scriptures have been inserted just now.

I will deal with all your oppressors at that time. And I will save the lame and gather the outcast, and I will change their shame into praise and renown in all the earth.


He has shown strength with his arm;
he has scattered the proud in the thoughts of their hearts.
He has brought down the powerful from their thrones,
and lifted up the lowly;
he has filled the hungry with good things,
and sent the rich away empty. 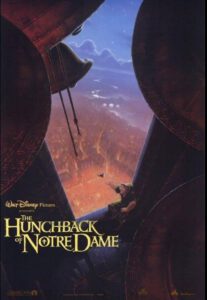 Victor Hugo is well served in this 34th Walt Disney animated feature. If you were worried like me, that the infamous Disney Cutseyfication process would spoil the great classic, worry no more. There are touches of this, mainly in the three gargoyles, but their funny comments do more than make us laugh – they provide much of the emotional impetus and commentary for the shy Quasimodo, as well as high-lighting the intense loneliness of his confinement in the Cathedral (the three are created by his imagination to enable him to bear his loneliness, only he can converse with them – to everyone else they are just stone statues).

The story is simple – the orphaned, deformed gypsy is watched over by the stern Frollo, chief city magistrate who would have drowned the infant during his pogrom of gypsies, but for the intervention of the Cathedral’s
kindly Archdeacon. Then one Feast of Fools day the grown-up Quasimodo disobeys his master’s orders and leaves the Cathedral, whereupon he is chosen to be King of Fools because of his ugliness. His joy over the supposed “honor” is short-lived however as some guards egg on the crowd to ridicu1e and pelt him with rotten fruit. When he tries to resist, he is tied to a wheel and brutally whipped. The nimble gypsy dancer and magician Esmerelda defends him, and soon is being hunted down herself, finding sanctuary in the Cathedral just in time. Frollo’s new Captain of the Guard, Phoebus, has become smitten with her, so the soldier is not happy with his orders to arrest her.

As Frollo’s tyranny grows, the good  Captain’s conscience finally causes him to disobey his superior, so that he, like his beloved, is hidden by Quasimodo in the tower of Notre Dame. The action-filIed climax will hold the attention of the young, while the character-revealing songs will enthrall adults who want more than just amusement from their movies.

This is one film in which the music is an integral part, both advancing the plot at times and uncovering more of the nature of a character. “Out There” expresses well Quasimodo’s outcast feeling and desire to live among the people whom he can only observe from high atop the Cathedral. Master of the Feast Clopin’s scene-setting song captures the essence of the medieval Feast of Fools when the high and the low of society changed places for one day. “Today everything is topsy-turvy. Today everything is upside down!” And Esmerelda’s heartfelt prayer-song “God of the Outcasts” is a powerful lament worthy of one of the prophets (more on this!) Judge Frollo’s soliloquy starts out in the vein of the Pharisee who lorded it over the Tax Collector in the temple, but it soon becomes a wrenching confession of a holy man torn by physical desires (Frollo also longs for the gypsy girl) and unable to accept or to banish them. One of the last songs raises the question “What makes a monster, and what makes a man?” Anyone working with children or youth would do well to pick up the soundtrack album – this one offers a lot of possibilities for teaching and discussion.

The last comment leads me to suggest to pastors and educators – after the families of your parish have seen the  film (which will probably be by early July if the mighty Disney Promotional and Marketing Machine works its usual magic – poor MacDonald’s is probably going to lose the summer kiddy trade to Burger King until the kids collect all the Hunchback toys offered by the latter  – organize a theater party (maybe the management will offer a group rate), and then meet back at the church to discuss the film. I could see building a Vacation Church School* around the film using the theme of the song “God, Help the Outcasts.” Scriptures from the prophets and episodes and teachings of Jesus receiving the outcasts of: his time (the story of Zacchaeus; the Woman at the Well, the Parable of the Good Samaritan and much more could form the basis for our looking at the outcasts of our own time and how (or whether) the church is doing any better.

The aforementioned song is a good example of the wonderful way in which music and animation work so well together in the film. Esmerelda has just found sanctuary from Frollo in the Cathedral, but she soon is chaffing at the idea of long confinement. Gypsies were born to roam free, not to be shut up within stone walls, she knows. In one of the side chapels she pauses before a statue of Madonna and Child and pours out her heart in the song. If Protestants can put aside their old prejudices against the adoration of Mary, they will be able to see how appropriate it is that she address her plea for the outcasts to the Virgin, whose Magnificat includes such lines as, “He has scattered the proud in the imaginations of their hearts/ he has put down the mighty from their thrones/ and exalted those of low degree…” Esmerelda  concludes her prayer/song with “I ask for nothing, I can get by/ Reach out for the people, the poor and downtrod/ I thought we were all children of God!” As we hear these words, the camera shows the gypsy from above. Surrounding her on the floor is a glorious halo of brilliant color created by light shining through the stained glass window. The artists have captured just the right look of pain and disappointment and hope on her face.

This is a film that deserves its acclaim and success.  (Purists might complain that Disney replaced the stark ending of Hugo’s masterpiece with a happy one, but show me another of the many versions in which the filmmaker dared to stay with the original one!)

You might want to reflect upon the scene with the Rose Window – like the rainbow over Noah’s Ark, it seems to be a harbinger that God will indeed answer her prayer.

Another touching scene, one that reminded me of one from the Charlie Chaplin film The Tramp, is when Quasimodo discovers that Esmerelda loves Phoebus. Because of the encouragement of his gargoyle friends, and the fact that the gypsy girl returns to the Cathedral to see him, the Hunchback had begun to believe that she might love him despite his disfigurement. The first kiss shared by Esmerelda and the soldier destroys this illusion. The animators’ tale bears comparison with that of another film about an outcast, Powder, reviewed elsewhere in this issue. Such films can sensitize us to the  needs of those either ridiculed or overlooked by the dominant groups of society.

* I did write a VBS curriculum, which was used at the church I served in the Catskills, and which was later published by Viaticum Press. For several years Viaticum also published VP.

This animated version of Victor Hugo's novel about a hunchback & a gypsy in medieval Paris emphasizes the theme of reaching out to outcasts.
Editor Rating ★★★★★5 out of 5
More Details