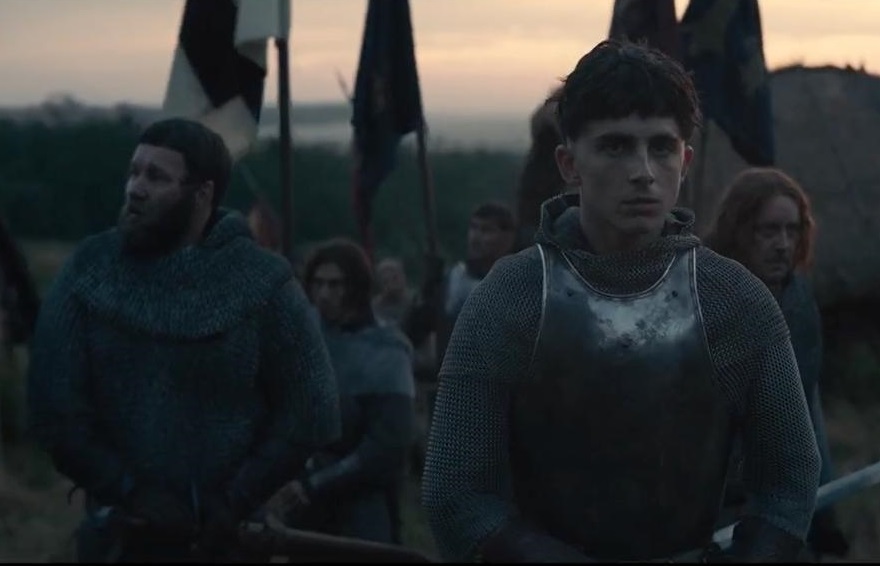 Wisdom will save you from the ways of wicked men,
from men whose words are perverse,
who have left the straight paths
to walk in dark ways,

who delight in doing wrong
and rejoice in the perverseness of evil,
whose paths are crooked
and who are devious in their ways.

If you find yourself tongue twisted by Shakespeare’s Elizabethan language, then David Michôd’s exciting The King might be for you, it being based on of Henry IV, Parts 1 & 2 and Henry V. Far deeper in character study than the most medieval action films, this could be seen as a thinking person’s medieval spectacle, with maturing of a character, the folly of war, and a sharp criticism of imperialism at its core.

Director and his co-writer Joel Edgerton, however, do diverge from the Bard’s depiction of Falstaff as a fat coward who eventually is shunned by his drinking pal Prince Hal (Timothee Chalamet). In this version the future Henry V does indulge in loose living with Falstaff (Joel Edgerton), and thus persona non grata at his father Henry IV’s (Ben Mendelsohn) court, which the young heir despises s filled with shallow sycophants. In retaliation the dying King names Henry’s younger brother Thomas (Dean-Charles Chapman) his heir.

Of course, this does not work out during the following weeks, with Henry proving his mettle in battle and Thomas dying in another. The self-reformed Henry V accedes to the throne, but his reign will not be a peaceable one, with the French Dauphin (Robert Pattinson) sending as a coronation gift a child’s ball. (In Shakespeare it is a set of tennis balls.) Everyone interprets this as an insult designed to lure Henry into war. Many in the court want this, but Henry holds back. There is considerable intrigue among his nobles, the most significant being William Gascoigne (Sean Harris). An assassin, allegedly hired by the Dauphin to kill Henry, is caught. In another departure from Shakespeare, Henry turns to his old drinking buddy John Falstaff for advice.  When at last Henry does go to war against the taunting Dauphin Falstaff is his most loyal adviser and fierce warrior.

The Battle of Agincourt is staged in all its bloody and muddy detain, the cream of French nobility first cut down by the arrows launched from the longbows of the English yeomen. King Henry’s speech before the battle might not be as eloquent as the Shakespeare’s “Band of Brothers” speech, but as you can see in IMDB’s “Quotation” section, it is still inspiring. What happens to the Dauphin and to John Falstaff I will leave to discover.

As part of the peace negotiations Henry and the daughter of the King of France Catherine (Lily-Rose Depp) are betrothed. The proud woman tells Henry,  “I will not submit to you. You must earn my respect.” Discussing with him why he went to war with France, she says, “All I see is a young and vain and foolish man so easily riled, so easily beguiled.” She reveals to him the truth about the plot to assassinate him, which seals the fate of close adviser William Gascoigne.

The deeds of Henry depicted in this film could well figure in a case against one-man rule, whether of king or dictator. In many ways Henry is a good man, certainly a courageous one, but more readily swayed to go to war than a democratic ruler would be. And his treatment of the traitorous William certainly goes against today’s hundreds of years of a legal system guaranteeing a person of a trial by a jury of his peers.

The rise of King Henry V, his friendship with Falstaff, & his leadership in the Battle of Agincourt is depicted differently than in Shakespeare's plays. (c) Netflix
Editor Rating ★★★★★4 out of 5
More Details