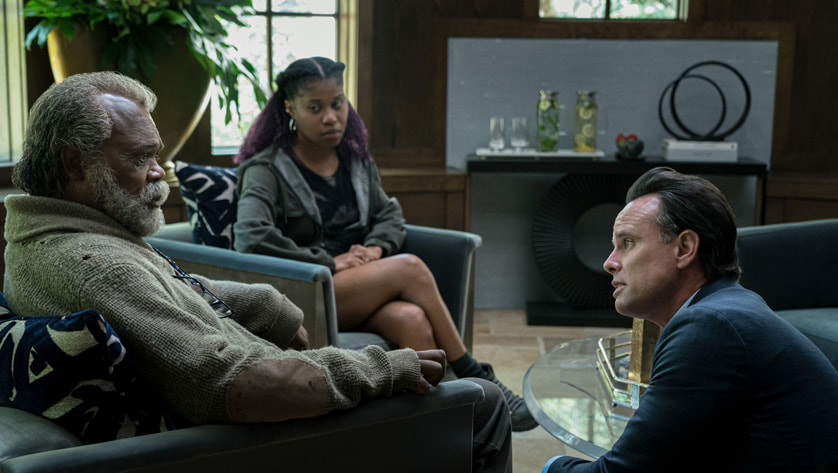 Remember the days of old,
consider the years long past;
ask your father, and he will inform you;
your elders, and they will tell you.

In the twilight of his years Samuel Jackson again proves what a consummate actor he is in this adaptation of Walter Mosley’s novel, one that focuses more on character development than on crime. The actor has striven for several years to film this story of a dementia-threatened old man, and thanks to the author himself writing the screen play, the project is a great success. Although it bears a resemblance to my favorite Cliff Robertson film Charly*, in that both characters’ minds are saved by medical science for an all too brief time from the ravages of dementia, Mosely’s story also explores the concept of what constitutes a true family and the status of being Black in a toxic white society.

Ptolemy Grey, at 91 years, is isolated in his Los Angeles junkyard-like apartment, his bouts of dementia as debilitating as the physical aches and pains of his body. The only member of his estranged family who will tolerate him is his grand nephew Reggie (Omar Benson Miller), who provides minimal but loving care during his regular visits, insuring that the old man takes his meds, deposits his pension checks, and keeps his doctor appointments. When Reggie is killed in a drive by shooting, Ptolemy’s life really hits the skids. Another relative Hilly (DeRon Horton) grudgingly steps in to help but during one visit to his bank, steals one of the old man’s checks.

Fortunately 17 year-old Robyn (Dominique Fishback) enters Ptolemy’s life. An orphan, she had been living with the old man’s niece Niecie (Marsha Stephanie Blake) but has to leave when the latter’s son attempts to rape her one night. Having been introduced to Ptolemy, Robyn shows up and insists on cleaning up his cluttered apartment, including the bathroom with its clogged toilet. She is sensitive enough to engage her new charge in deciding what to keep and what to toss. During this process she comes across the forgotten doctor’s appointment that Reggie had posted. She accompanies Ptolemy to make sure he understands what is transpiring.

Dr. Rubin (Walton Goggins) is a white medical researcher who claims to offer a serum that will temporarily help Ptolemy regain all of his memories. Some of these we have already seen in fragmentary form—glimpses of his second wife, the voluptuous Sensia (Cynthia McWilliams), with whom he had had a complicated relationship of love and infidelity. And there are disturbing memories going back to when he was eleven living in the South–of Coydog, his uncle who served as a mentor and father figure. The latter had left some kind of a treasure in his care, but he cannot remember what or where it is. Dr. Rubin explains that Ptolemy will recover these memories and much more, but, leveling with the two, explains that the serum works just for an unspecified time, and then will hasten his decline. Robyn, distrusting the white man, wants nothing to do with the deal.

Ptolemy, though equally distrusting of any white man, decides to agree to enter the program. He wants to regain his lucidity so he can remember about the treasure and to solve the mystery of Reggie’s murder—the police have shown no interest in investigating the event, writing Reggie off as just one more victim of Black upon Black violence. Ptolemy realizes that by signing the agreement, a white man will own his body, just as they had owned those of his ancestors. He shows his awareness of his Faustian bargain by calling the doctor “Satan.” Ptolemy promises to be an important part of his study in perfecting the serum, so the white man offers no resistance to being addressed as such.

It is heartening to watch the bonds of love grow between the old man and his young caretaker. They even talk at one point of how they might have been romantically bonded had they been closer in age. As Ptolemy regains his cognitive powers more is revealed of his Uncle Coydog’s terrible fate and of the nature of the treasure bequeathed to the boy—and of course, as to what it is and where it can be found. The solving of the murder of Reggie takes little time and effort, though it is fraught with danger.

Much more time is devoted to the reaction of Ptolemy’s blood family to his making Robyn the executor of his estate upon his passing. We see a man loving his family, despite their neglect of him and their greed, but who knows that they need to be protected from that greed, hence his choosing the young girl who has evidenced no desire for his treasure to be custodian of it. Robyn may not be “blood” kin, but she is bonded to him by far greater ties, that of love and other values that go deeper than blood. Ptolemy would have understood well what Jesus meant when, in the 3rd chapter of Mark, he rejected his own family and declared that his true brothers and sisters are those who do the will of his father.

Thus Ptolemy says to Robyn, “Wouldn’t be no me sitting here if you weren’t sitting there next to me.” This is another limited series that shows how valuable this format is, allowing the filmmakers ample time to show the details of relationships and the changes that loving concern can bring to a person’s life. Though not central to the story, the series shows well the indignities a Black person suffers upon our streets, such as the way the white member of a pair of cops treats Ptolemy’s nephew when they come up to the pair arguing and assume that the young Black man must be up to no good. Or later, the way that Black policeman looks at Ptolemy when his white partner evidences no sympathy for the old man’s loss of Reggie or concern that the culprit be found out.

Yes, there is a lot to be gained from this insightful series. May Samuel Jackson continue to find such good material to both entertain and challenge us!

* To see why Charly is such a favorite film of mine, see my WJK book Praying the Movies: Daily Meditations from Classic Films. Charly was based on Daniel Keyes story “Flowers for Algeron.”

A demented Black man agrees to a white doctor's deal to take his serum so he can remember a treasure & find the murderer of his nephew, much to the disapproval of the young Black woman caring for him.
Editor Rating ★★★★★5 out of 5
More Details