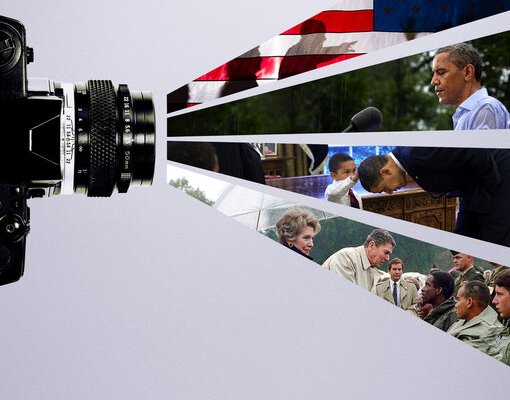 He has told you, O mortal, what is good; and what does the Lord require of you but to do justice, and to love kindness, and to walk humbly with your God?


But blessed are your eyes, for they see, and your ears, for they hear. 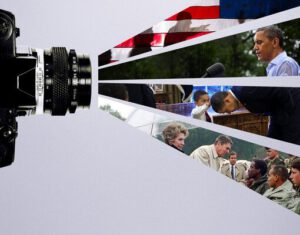 Director Dawn Porter’s documentary exploring the work of White House photographer Pete Souza is a combination of cinematic Valentine to Barack Obama, the man as well as President, and a polemic against the current occupant of the White House. Souza himself has done so in his book Shade: A Tale of Two Presidents. On one page of that book he prints one of the 45th president’s Tweets complaining about “fake news” and such, and on the other, a photograph of President Obama doing the opposite—good case in point, a rant against immigrants vs Obama welcoming a group of Muslim girls, their heads covered by scarves. In the film the director adds lots of clips to Souza’s still pictures, as well as his narrative, much of it taken from his remarks made while on his book tour. Thus, this will be a film loved by many and deplored by others. Whether or not you “see it” as the author sees it, will depend on what you think of the 44th and 45th presidents.

Ms. Porter does not begin with the Obama administration but takes us back to the 80s when Ronald Reagan occupied the White House. Pete Souza was snapping pictures then as well. He says that his job is to capture a historic moment to add to what will become the historical record. He reveals that he did not agree with many of Mr. Reagan’s policies, but his job was to be as objective as possible. He also saw and recorded the many moments when the President showed his warmth, such as touching wife Nancy’s hand at times or reaching out to someone suffering. He wishes that the President had not ignored the HIV epidemic or become entangled in the Contra scandal, but still respected him as a man. At that time, he kept his personal opinions to himself.

Called back to the White House, he accepted on the condition that he be granted full access to President Obama’s private as well as political life. As we see by the scores of great photographs of the First Family and the President in the Oval Office, the Situation Room, and outside, from Sandy Hook to Africa and Europe and Asia, The White House staff agreed to his terms.

There are so many warm, human moments from those eight years that it is impossible to select the most moving.

-the President alone in the Oval Office deep in contemplation as he wrestles with a decision.

-the President in the Situation Room amidst his highest-ranking advisers as they await news of the raid on Osama bin Laden’s lair. (Later, Souza analyzes the photo of No. 45 and his staff as they receive word of the killing of the Iranian general in Iraq, the photographer’s trained eye detecting that this was a posed photo, not a taken at the time one.)

-the jubilation of the President and his hardworking staff as they hear the news via TV that the Affordable Care Act has passed.

-the First father with his girls frolicking in the snow or holding hands with Michelle.

-the President hesitating and then breaking out in the singing of “Amazing Grace” at the funeral in North Carolina.

-the First Comforter at Sandy Hook with a mother sobbing in his embrace as the slain six-year old’s father watches and comment.

-the President inviting Souza to hold his marriage ceremony in the Rose Garden. (The professional relationship of the two had morphed into friendship by this time.)

The list could go on and on in this chronicle of a fly-on-the-wall photographer with the ability to capture at just the right time a moment of grace.

The many still photographs might make us reflect on their importance in our past—that iconic LIFE photo of a sailor kissing a woman in Times Square as embodying the nation’s joy that WW 2 had ended; the photos of dogs attacking demonstrators in Birmingham galvanizing the nation to support the Civil Rights movement; the ghastly photos of the Mai Lai Massacre stirring the conscience of our nation, as well as the photo of the female student crying out over the body of the fallen Kent State student. These, and others, had an impact not only on their own time, but shape the way that we look back upon and interpret past events. Who can think of the Depression without some of the images that Dorothy Lang shot of the stark faces of hungry and desperate victims?

Given the power of such images, there is, to recall Spiderman’s Uncle Ben’s words, much responsibility laid upon the shoulders of the man or woman who snaps the shutter at the right moment. Pete Souza apparently came to understand this as his time in the White House was coming to its inevitable end—but not in the way he had expected. Instead of the carefully prepared former Secretary of State moving in, it was to be the New York Deal Maker, a man apparently beholden to all kinds of foreign influences and internal flaws that would be disastrous for the nation.

After watching the film, one of my favorite fictional films came to mind, The Year of Living Dangerously, Peter Weir’s gripping story of Billy Kwan, a dwarf Eurasian photographer striving to get a disinterested Australian radio reporter to become concerned with more than advancing his career—to look around him and see the poor and become an advocate for their welfare. Both the fictional film and this documentary can be seen as visual parables about seeing. Billy Kwan became obsessed that Guy Hamilton see, via his stark photographs of the poor, the urgent human needs of his people and then to stir the world’s conscience to do something about their poverty. Pete Souza, like Billy, wants us to see human compassion and concern captured so well by his photographs. As stated below, Souza moves beyond recording a historic moment to a greater goal. The film’s tag line describes this process as, “Finding his voice through the power of photos.”

The film chronicles well the transformation of the photographer from a witness to history holding back his own views to one so anxious about the present and future that he becomes an advocate for the values that he saw so well embodied in Barack Obama—intelligence, compassion, humility, and decency. The fears that he felt on that last day, January 20, 2017, when he recorded the President’s last moments in the White House, became realized as the 45th President bullied and bungled his way through those early years of his administration, transforming the once high respect the nation and the world held for the office into one of contempt and revulsion. Thus, came Souza’s book in 2018, and now this film. If you are given to tears while watching a film, be sure to have some tissues on hand for this one, for use mainly during the Obama years portion. As to the last portion, it might be seen like the result of giving a camera to the prophet Isaiah or Jeremiah.

No questions for this review. For personal reflection, read again the last two paragraphs.