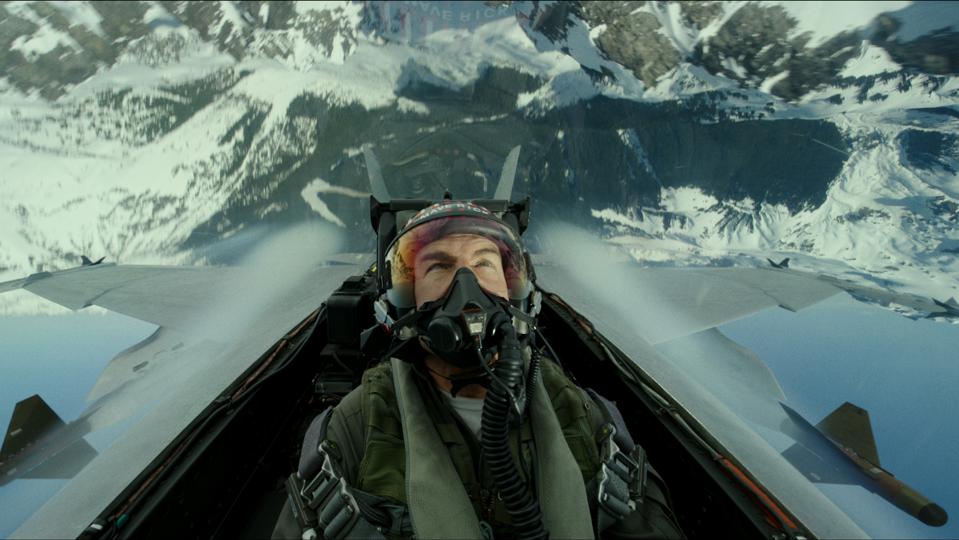 Two are better than one,/For if they fall, one will lift up the other, but woe to one who is alone and falls and does not have another to help.

Stepping into the shoes left vacant by Tony Scott when he jumped off a bridge in 2012, Joseph Kosinski ably directs a cinematic ride as exciting as any at your favorite amusement park—and as about as substantive. Tom Cruise still exudes the charm that first attracted his fans, mellowed by the years that stripped away some of the earlier arrogance of his character. Little wonder that this has become a box office smash.

We pick up the story of Pete “Maverick” Mitchell (Tom Cruise) almost 40 years after we left him in the first Top Gun movie—true to his nickname, he is still very much a loner. He is a captain while his former rival and now friend, Adm. Tom ‘Iceman’ Kazansky (Val Kilmer), has steadily advanced through the ranks. This is to Maverick’s liking because any advancement would land him behind a desk, and he lives to fly. Thus he is content to be a pilot testing a new secret scramjet and struggling to meet the requirement that it reach a minimum speed of Mach 10.

Maverick is in the air when the man in charge of the project, Rear Admiral Chester ‘Hammer’ Cain (Ed Harris), arrives to order the cancellation of the program, but Maverick ignores the order to come down, instead pushing the plane to its limit as he rises high above the desert. He achieves Mach 10 speed, and then pushes beyond the limit, to the cheers of his ground crew but the fury of the Admiral. Then the plane breaks up, and Maverick has to eject and land by parachute. The livid Admiral tears into the pilot: “Thirty-plus years of service. Combat medals. Citations. Only man to shoot down three enemy planes in the last 40 years. Yet you can’t get a promotion, you won’t retire, and despite your best efforts, you refuse to die. You should be at least a two-star Admiral by now, yet here you are. Captain. Why is that?” After a brief silence, Maverick replies, “It’s one of life’s mysteries, sir.”

If it were up to the Admiral, Maverick’s career would have ended there, but thanks to Iceman, he is assigned to the pilot training school that he had aced years earlier. There is a uranium processing facility in an unnamed country that will go on line in a few weeks in direct violation of an international treaty. Situated in a mountainous region and protected by an elaborate anti-aircraft missile system and a squadron of superior aircraft at a nearby airbase, taking the facility out looks like a suicide mission. When called to give his opinion, Maverick discerns that only by flying at almost ground level through a connecting series of canyons could a small team of jets succeed. They would have just a few minutes to mark and launch their rockets into a vent of the factory that protrudes above ground. When you see the diagram, you will realize that this is like the Star Wars mission, except that the Death Star is buried under ground. This also depends on the elimination of the airbase by a Tomahawk missile strike. The intelligence is that the enemy jets are so advanced that they would overwhelm our planes in aerial combat. (Don’t ask how this happened when we have been spending such huge sums through the years to keep ahead of the Russians and Chinese—yes, only one of the latter could be the enemy that for some reason the filmmakers don’t want to identify!)

Maverick is upset to learn from Adm. Beau ‘Cyclone’ Simpson (Jon Hamm) that he will not lead the team in person. He is to train them. The candidates are all at the top of their class, “the best of the best”—and to show that some social progress has been made in the Navy, two of them are women pilots. However, the two that will make the most impression are men, Lt. Bradley Bradshaw (Miles Teller), call sign: “Rooster,” and Lt Jake “Hangman” Seresin (Glen Powell). “Rooster is the son of Maverick’s late friend and Radar Intercept Officer Lt. Nick Bradshaw, aka “Goose,” who died in the first film. Maverick was initially blamed but cleared in the investigation. Rooster is also upset that Maverick’s evaluation of him had set him back four years in his career. “Hangman” becomes a problem because his arrogant over-evaluation of himself makes it almost impossible to learn anything from anyone else, even the legendary Maverick.

How Maverick copes with this, his superiors who prefer to kick him out of the service, and then the impossible mission—yes, of course circumstances will call for him to step in and lead the mission, you didn’t really think that a character played by Tom Cruise would stand by in safety did you?—adds up to an exciting climax guaranteed to get your adrenaline flowing. The aerial shots, the cameras mounted in the cockpits giving a panoramic view of pilot and landscape are breath-taking. This has to be some of the most thrilling combat footage ever filmed.

There are many human moments in the story, perhaps the most touching being the scene between Maverick and his old friend who has saved his career more than once Adm. Tom ‘Iceman’ Kazansky. Kazansky is stricken with throat cancer when Maverick visits him, so the first have of their conversation is conducted through a computer. The Admiral seeks to bolster his friend’s flagging confidence, his desire to help so strong that he manages to speak a few sentences. As the two men embrace both know that this is for the last time. Sure, enough Maverick attends his friend’s funeral shortly afterward.

The plot also has a hokey development that exceeds belief, but hey, without it, the film would have ended 20 minutes or so sooner—and we would not have the warm reconciliation toward the end of the film, or the delightful scene of Maverick flying the P-51 Mustang he has been working on. (This is a restored fighter plane actually owned by Cruise, the actor being an avid pilot.)

But, more than my unease about the unrealistic development, is that concerning the film’s narrow focus, one that ignores any moral or ethical implications of the mission that might lift the film above the level of a computer game. What gives us the right to invade the airspace of an enemy, and why are we never shown the face of the enemy, they always seen as black clad, their faces covered by masks? Hundreds of people will die in the airstrike, and even if this is necessary to prevent the possible deaths of thousands that might result if the facility should provide the uranium for the enemies atom bombs, this argument is never raised. The only concern is for the team members to learn to work precisely together so they can hit their target and return safely back to their aircraft carrier.

Another issue that is raised is the nature of aerial warfare in the scene wherein the Admiral chastising Maverick at the beginning of the film says, “The end is inevitable, Maverick. Your kind is headed for extinction,” to which Maverick says, “Maybe so, sir. But not today.” The officer is referring to armed drones replacing piloted aircraft, but Maverick seems certain that A.I. cannot replace the need for human pilots. For a look at what this kind of warfare might look like and its inevitable moral cost see my review of the 2015 film Good Kill.

In conclusion, if you are looking for aerial thrills, this is your film. Just put away any scruples or any concern for a realistic story-line. The only promise this film makes is of a thrill ride, and on that it delivers.

This review is in the June issue of  VP along with a set of questions for reflection and/or discussion. If you have found reviews on this site helpful, please consider purchasing a subscription or individual issue in The Store.

Still a Captain testing new planes, Maverick is ordered to Top Gun base to train pilots to conduct a suicide mission against a nuclear facility.
Editor Rating ★★★★★3.5 out of 5
More Details