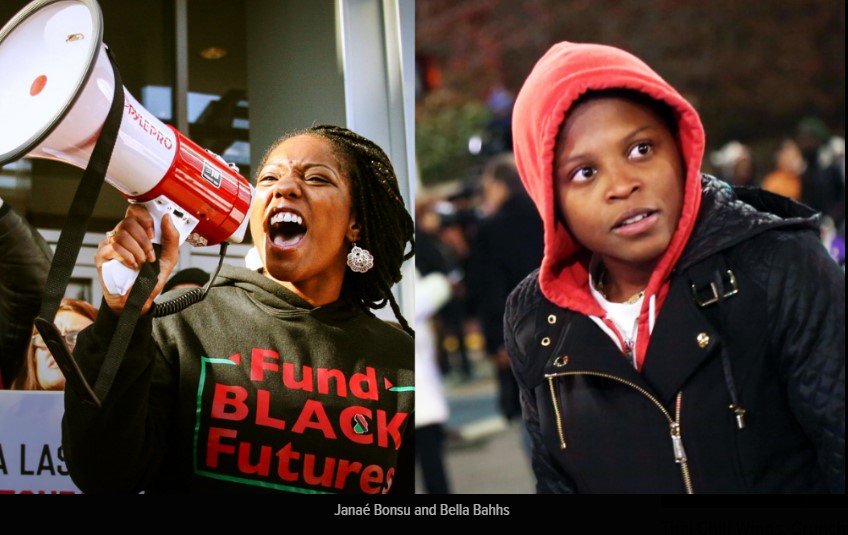 This documentary focusing upon two young Black activist women in Chicago is one of the many treasures to be found on the web page of PBS’s POV series. Chicagoan Ashley O’Shay was concerned about two city police killings that the police and mayor were white washing. Rekia Boyd was a 22-year-old Black woman fatally shot in the back of the head by Dante Servin, an off-duty police detective, and 17-year-old Laquan McDonald, also Black was shot and killed by Chicago police Officer Jason Van Dyke.

Ms. O’Shay’s cameras followed closely the activities of social activist Janae Bonsu and Bella Bahhs (the rap name adopted by Ambrell Gambrell). Others are also included, but most of the footage centers on these two, Janae Bonsu being a 24-year-old Ph.D. candidate working on her thesis, and Bella Bahhs a 22-year-old activist born and raised on Chicago’s west side where she has honed her skills as a rapper—a “Rap-tivist” she calls herself. Bella brings a special viewpoint to the scene because both her parents are incarcerated. Her grandmother who had raised her has died, so she is still coping with grief.

We often see both of them with bullhorns in hand as they lead crowds in chant, and in Bella’s case, raps. The film begins with members of the Black Youth Project 100 (BYP100), a group working for policy change through direct action, invading several Lincoln Park diners during busy lunch time. A few of the diners (mostly upscale whites) connect with the protestors, but most try to ignore them as they eat their lunches. A restaurant employee dismisses them as intruders by saying they get the news, so they (the diners) do not need this harassment.

Also shown are board and council meetings where the leaders try to fend off criticism. Before she was mayor we see Lori Lightfoot, as well as then mayor Rahm Emanuel, the latter at first standing by his police chief and the department cover up of the police killings. Along with numerous demonstrations with signs held high, some of the family and private lives of the pair are shown, including Janae meeting often with her professor/mentor and  relieved at completing her Ph.D. dissertation.

Clearly the Chicago officials and police had violated the command in the above Exodus passage by issuing a “false report” of the shootings. Janae, Bella, and their companions are partially successful in their constant harassment of the establishment. The videos were eventually released, showing a very different version of the shootings from the official report. Officer Jason Van Dyke was charged, tried and found guilty, and served half his sentence before being released, much to the disgust of demonstrators. Officer Dante Servin was declared “Not Guilty” by a judge after a four-day trial, but eventually left the department. Many other changes were brought about by their tireless protests who were following the above dictates of the Psalmist, the film thus engendering hope that persistent activists can bring some measure of justice. But, the film affirms, in a world where white power still rules in all its brutality, justice is not a sure thing—not without people like Janae and Bella speaking out in the streets and halls of power.

Two young Black activist women take on the Mayor & the Chicago Police Dept.'s attempt to cover up the killings of unarmed Blacks.
Editor Rating ★★★★★5 out of 5
More Details