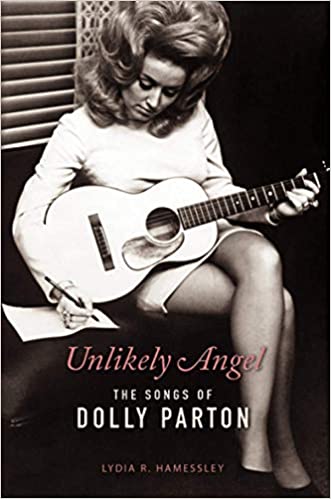 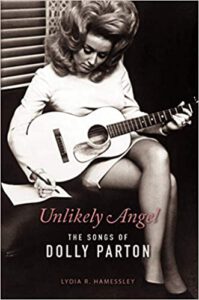 Lydia R. Hamessley’s Unlikely Angel: The Songs of Dolly Parton is just what its title indicates, a thorough study of many of the singer’s 3000 songs. Those wanting a full biography of their idol can look elsewhere—and yet because of the personal nature of so many of the songs, the reader will learn a great deal of Ms. Parton’s personal history. Dolly Parton herself has said numerous times that she wants to be taken seriously for her music, and this book, well written by a musical expert with academic credentials provides convincing proof that she deserves to be.

I must admit that I am a late-comer to the Parton Party, first drawn to taking her seriously by Ken Burns’ devoting considerable time to her and her songs in his masterful PBS series Country Music. Of course, I knew of her and liked the few songs of hers that I occasionally heard on my car radio. And then I came across this book at our library, which led me to the film reviewed elsewhere in this issue, DOLLY PARTON: Here I Am. All three have convinced me what a musical genius the woman is, deserving the sometimes overused title “a national treasure.” I have a lot of catching up before folding up my earthly tent!

This book is not one of those puff pieces written by some generalist of a writer but a fully foot noted work with a Timeline, a General Index and a Song Index, and more. Ms. Hamessley is a musicologist, Hamilton College professor, and herself a player of the clawhammer banjo. Both  Dolly Parton and Steve Buckingham, the singer’s longtime producer cooperated with the author, Mr. Buckingham writing a preface for the book. He reveals that he took the author’s questions to Dolly and that he then recorded her long answers. These are scattered throughout the text, along with Ms. Parton’s words from numerous other interviews she has given through the years. Thus, Ms. Parton’s voice emerges loud and clear, along with that of the author.

The book is both broad in its coverage—from a hasty count of the 7-page list of songs, I estimate almost 300 songs are explored—and deep. The latter is seen in the numerous charts that the author provides in which such songs as “Coats of Many Colors,” The Grass is Blue,” “The Bridge,” and “Me and Little Andy,” showing how the music so effectively matches specific words or line. At times her analysis of mode and chords and such is way over my head (I cannot read music), but this never seemed daunting, at least convincing me that Dolly the composer is as great at her craft as Dolly the lyricist.

I understand that the digital version of the book has links to the text so that one can listen to the song while reading Ms. Hammessley’s exposition of it. I often was able to do the same thing by going to YouTube and calling up the song under discussion. Thus, I was able to take in and hear for myself what the author was explaining. One of the YouTube side benefits of this is seeing on the left a column of other Dolly Parton performances, some of which surprised me. I had never known that Ms. Parton had recorded such protest songs as “Blowing in the Wind” and “Where Have all the Flowers Gone.” She has been noted for staying out of political subjects, though her beautiful “Raven Dove” makes a strong plea for peace, drawing heavily on Scriptures, concluding with:

“When lambs walk with lions, a child tames the beast
Nations shall gather and bow at his feet
And loved ones shall rise up from their earthly sleep
And he’ll separate all the chaff from the wheat.
Hallelujah, hallelujah, hallelujah, how sweet
When the raven of darkness turns into a white dove of peace

Raven dove, behold he cometh in the clouds
And every eye shall see him
Sweet bird, sweet bird of peace
Raven Dove”

The above song was written in response to the horrific 9/11, as was one that takes a more theological tack, “Hello, God.” Neither this nor “Raven Dove” mention 9/11 nor the terrorists explicitly, and so, as Ms. Hamelessley points out, can be embraced by fans that span the political spectrum. It opens with the chorus, and then we hear her questions:

“This old world has gone to pieces
Can we fix it, is there time?
Hate and violence just increases
We’re so selfish, cruel and blind
We fight and kill each other
In your name, defending you
Do you love some more than others?
We’re so lost and confused”

This and “Raven Dove” are from what is regarded as one of Dolly Parton’s Blue Grass albums Halos and Horns,* Blue Grass and Mountain music being just one of the many genres that this versatile artist has embraced. Too big a star to stay within Country Music alone, she has crossed over into pop as well, and even into the movies. Her “9 to 5” became an anthem for women struggling for dignity and equal treatment in the workplace—see my review of the movie for more on this, as well as what I consider the companion piece for this fine book, DOLLY PARTON: Here I Am.

There is much more to the book, but I will leave it for you to discover. However, I must at last report at least briefly the “Dolly Look”  before closing. The author, and the companion film in which Prof. Hamelessley appears throughout, discusses this at many points in the look to make sure that we understand that the tight-clothed, overly made-up floozie with huge hair is a stage persona, much like the wild outfits and painted faces of some rock stars. She is a little girl’s image of glamour, a “dumb blond” look concealing a shrewd businesswoman with a brilliant brain beneath that big wig. It is no dumb blond that writes such moving lyrics so well set to music, nor a naïve girl who dared to say “No” to Elvis Presley’s request to record her song “Jolene” because she would not give up the publishing rights. And though other C-W stars have owned restaurants, bars and record stores, which of them can match her Dollywood theme park and her museum?

If you ever underestimated Dolly Parton, you will no longer once you read this enjoyable book. And for those of you who are musically literate, you will gain even more from it than I.

* The song which gives the album its name is worthy of study as an example of the depth of Dolly’s mind in its assertion that “life is a challenge from the day that we’re born.” The chorus could be considered an exposition of the inner conflict described by the apostle Paul in Romans 7:14-25.

“Halos and horns, sinners and saints
Hearts that are torn between what’s wrong and right
Just because it feels right does not make it so
So we struggle through life in horns and halos.”