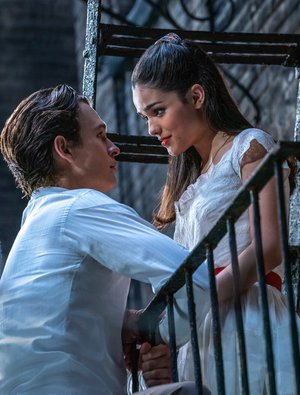 The people who walked in darkness
have seen a great light;
those who lived in a land of deep darkness—
on them light has shined.


He shall judge between many peoples,
and shall arbitrate between strong nations far away;
they shall beat their swords into plowshares,
and their spears into pruning hooks;
nation shall not lift up sword against nation,
neither shall they learn war any more;
but they shall all sit under their own vines and under their own fig trees,
and no one shall make them afraid;
for the mouth of the Lord of hosts has spoken.


Then I saw a new heaven and a new earth; for the first heaven and the first earth had passed away, and the sea was no more. And I saw the holy city, the new Jerusalem, coming down out of heaven from God, prepared as a bride adorned for her husband.  And I heard a loud voice from the throne saying,

“See, the home of God is among mortals.
He will dwell with them;
they will be his peoples,
and God himself will be with them;
he will wipe every tear from their eyes.
Death will be no more;
mourning and crying and pain will be no more,
for the first things have passed away.”

Director Stephen Spielberg and scriptwriter Tony Kushner have triumphed in their revision of the smash Broadway and film musical Westside Story! I have long been a lover of the play and film that featured music by Leonard Bernstein, lyrics by Stephen Sondheim, and a book by Arthur Laurents. Like many fans of the original film, I thought it crazy and hubric that anyone would dare to revise such a masterpiece—after all, look at the mediocre revision of the classic The Day the Earth Stood Still! And then, at the new version’s very opening shot featuring rubble, bulldozers, cranes with wrecking balls, and a construction sign, my heart leapt up, and I wanted to shout out an enthusiastic YES! This is going to be great after all!

The original film began with an aerial view of lower Manhattan, the camera transporting us over the skyscrapers of midtown, honing in on the west side of the title, and then taking us to ground level. Spielberg’s begins at ground level, the camera tracking across rubble, partially demolished row houses and twisted iron bars from fire escapes, bull dozers at work, and then stopping at a sign, which announces “New York City Housing Authority Slum Clearance.” It includes a picture of the coming Lincoln Arts Center. Upper class art and culture is displacing the current dwellers, the disposable dregs of society.

Spielberg and Kushner have improved upon the original by appropriate ethnic casting, providing more dialogue (some of this in Spanish with no subtitles, which gives more substance to the Puerto Rican milieu of the Sharks), new scenes, one new character, an additional song (very familiar to Puerto Ricans), a backstory for Tony, and shifting the show’s songs and the scenes around quite a bit. With one exception, all of this greatly enhances the story, reminding us again of the relevance of this film to the prejudice-fueled hostilities of today, even though the story’s evolution can be traced back to the late Forties.

The story, of course, was inspired by Shakespeare’s Romeo and Juliet, with the new character of Valentina replacing both the Doc of the earlier film, which in turn replaced the sympathetic counselor Friar Lawrence in Shakespeare’s play. Stand-ins for the feuding Montagues and Capulets are the Caucasian Jets and the Puerto Rican Sharks, the latter in the 1950s just as much at each other’s throats as the former were in Verona. This change brings up the mixture of racism and hostility toward immigrants that still poisons our society today. The play also spoke to another prevalent concern of the Fifties, juvenile gangs (which spawned such films as Rebel Without a Cause), evident in the play’s The Jets and the Sharks. This too is still with us, with cities like Chicago and Baltimore plagued by so many Black youth dying amidst inter-gang warfare.

The new film emphasizes the ethnicity of the Sharks by having them sing in Spanish a rousing rendition of “La Borinqueña,” the national anthem of Puerto Rico.” This, I believe comes right after the Jets have invaded their territory and defaced with paint the large mural of the Puerto Rican flag, leading up to the first rumble in the film. The police arrive, and the Sharks quickly disperse, knowing all too well the cops would accuse them, and not the invading Jets, of rioting or disorderly conduct.

In several ways we are reminded that this is a world ruled by prejudices.

-The Jets smear paint on the large mural of the Puerto Rican Flag that the neighborhood proudly displays.

– When we see Lieutenant Schrank (Corey Stoll) talking to the Jets, he tries to get them on his side by dissing the Puerto Ricans. He also dismisses the Jets and their parents as the dregs left behind by the smarter, more ambitious whites who fled the ghetto to settle in the suburbs. These cops are not regarded as friend by the Jets,  and even less so by the Puerto Ricans.

-In the song “America,” Anita & the women sing of their love for America, but the men sing of how Puerto Ricans are treated in this country as 2nd class citizens: “One look at us and they charge twice!”

-Anita is very upset that Maria loves a gringo, so she tells her, “Stick to your own kind!”

The musical reminds us that little has changed since the Fifties, with the small exception that the outward show of prejudice is discouraged today.

For more references to the plot and to the theological interpretation of the Advent hopes of Tony and then Tony and Maria in the songs “Something’s Coming” and “Somewhere,” I refer you to my review of the 1961 movie elsewhere in this issue. For now I want to concentrate on the changes in the new film and how, with one exception, I believe they improve upon the original.

Tony’s new back story identifies him as a remorseful ex-con, sent up river for almost killing another boy during a fight. Thus, he must stay away from his former companions, the Jets. He is not only working at Doc’s Drug Store,  but is boarding there in its basement. Doc’s widow Valentina (not even hinted at in the 1961 version) is mentoring him, keeping him out of trouble and helping him plan for a better future. Her inter-racial marriage foreshadows Tony’s hope for marital bliss with Maria. Indeed, she will support his plans of marriage and supply the means for them to flee the city.

After the balcony/fire escape scene, Tony and Maria agree to meet the next day. Their subway ride takes them to one of the most lovely sites in Manhattan, the Cloisters, a museum of medieval art housed in a building made up of the stones of several European abbeys. Tony confesses his past to Maria, revealing that he has spent time in prison for almost killing a rival in a street fight. She accepts his remorse, and his love. This new filming location is a beautiful setting with its garden and stained glass windows that suggests the original time of Shakespeare’s play, and perhaps Friar Lawrence. It is a perfect setting for their sung marriage vows to one another in “One Hand, One Heart.”

Tony is so disturbed by his violent past that he becomes more of a would-be peacemaker, an intention strengthened by his new-found love for the Puerto Rican Maria. Convinced that he can persuade his buddy Riff and Bernardo, the brother of his beloved, he sets out to stop the rumble. However, as you well know, his attempt to befriend Bennardo is swept aside by the prejudiced Sharks leader, with tragedy quickly following.

Possibly the biggest change is assigning the song of the two lovers, in which they sing ” We’ll find a new way of living, We’ll find a way of forgiving,” to Valentino. Alone, she sings “Somewhere,” making the song more universal, beyond just the longing of two teenagers for a place where they can freely live out their dream. This is commendable, but I wish that the song could have been reprised, as in the original film by the youngsters, thus enhancing the pitiable poignancy of their young love, their budding love crushed shortly after sprouting to life in that gym. The silent ending of the new version does possess a starkness that leaves us pondering what might have been, but I miss the yearning so tunefully expressed in the song—and after all, the song was originally intended as a duet.

I am happy that we have this retelling of the old story of love lost—no, love dashed, by the senseless prejudice of society—but I am not about to lay aside my DVD of the 1961 version. I feel we are blessed to have two interpretations of this timeless story and agree with the director that the story is even more topical today. In an interview on Yahoo’s Entertainment site the director says:

“Divisions between un-likeminded people is as old as time itself,” Spielberg says. “And the divisions between the Sharks and the Jets in 1957, which inspired the musical, were profound. But not as divided as we find ourselves today.

It turned out in the middle of the development of the script, things widened, which I think in a sense, sadly, made the story of those racial divides — not just territorial divides — more relevant to today’s audience than perhaps it even was in 1957.” 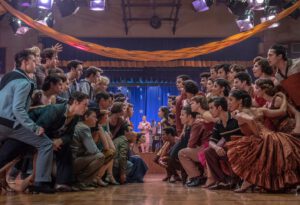 For this reason alone, this is a film I wish every American would see and take to heart—apparently a forlorn hope, because Variety reports that it “flopped” at the box office during its opening week, taking in a disappointing $10 million. It seems that the public wants CGI films with superheroes. Fortunately, the studio made a deal with theater owners to keep it on the big screen through the new year, so there is time yet to see it as it should be seen—those energetic dance numbers demand a big screen. Be sure to go, and make plans to discuss it, either with friends or with a group. There is so much to process, with the insights of others increasing your own understanding and enjoyment. And save the guide I wrote for the 1961 version for use next year when Advent returns. Then you can place along with “O Come, O Come Emanuel” Tony’s expectant words:

Could be!
Who knows?
There’s something due any day;
I will know right away,
Soon as it shows.
It may come cannonballing down through the sky,
Gleam in its eye,
Bright as a rose!

Who knows?
It’s only just out of reach,
Down the block, on a beach,
Under a tree.
I got a feeling there’s a miracle due,
Gonna come true,
Coming to me!