IT’S ABOUT BUILDING A COMMUNITY: A huge Detroit crowd turns out at Orchestra Hall for the launch of Faith’s first book.

Who is this woman inspiring so many?

To understand the inspirational power of Faith Fowler’s work as a storyteller, a pastor, a community developer and a world-class entrepreneur—you first have to understand that, for Faith, it’s all about building a community. 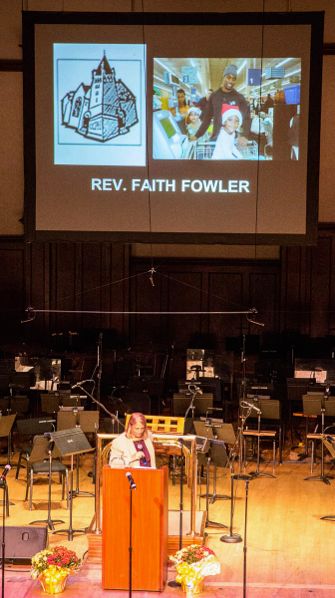 Faith Fowler was born and raised in Detroit. She earned degrees from Albion College, Boston University School of Theology and the University of Michigan-Dearborn. But those details don’t capture the force for change she has become.

In a lengthy Detroit Free Press column, Mitch Albom wrote: “Faith Fowler, 55, is not your typical pastor. She is funnier. And more blunt. And, Lord, does she get things done. … She is the most important currency of our city, a loving, egoless, inspiring leader who doesn’t see color, doesn’t see class, who looks at our poorest, most neglected citizens and sees only hope and opportunity.”

Known for her deep faith and creative ideas, Faith serves both as one of the city’s leading pastors and a nonprofit entrepreneur. She is the pastor of Cass United Methodist Church in Detroit—and over the past 20 years, Faith has organized and expanded Cass Community Social Services (CCSS). Feeding the city’s needy families has been a mission of the church for many decades. Under Faith’s leadership, CCSS now prepares more than 1 million meals each year.

Now, Faith and CCSS are known for turning one of the nation’s most impoverished urban centers into a gold mine of talent and resources. Faith and her colleagues at CCSS founded Cass Green Industries to improve city life and to provide jobs for chronically unemployed men and women. The latest “green” project, in 2014, sends workers across the city to collect thousands of abandoned tires. Back in the Green Industries factory, employees turn that waste into signature-old-English-D Detroit sandals. Trash heaps of tires are vanishing as stylish pairs of “Detroit Treads” are flying out of the city to customers in nearly every state in the U.S. and overseas as well.

Want to know more? Come on. Become a part of this life-changing project. Buy the book! 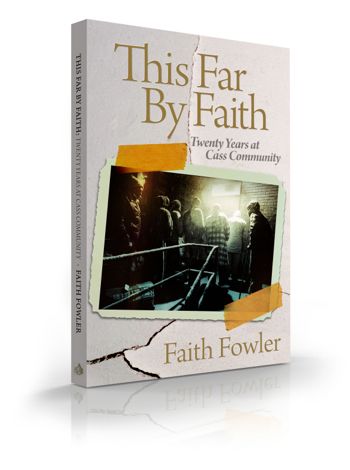