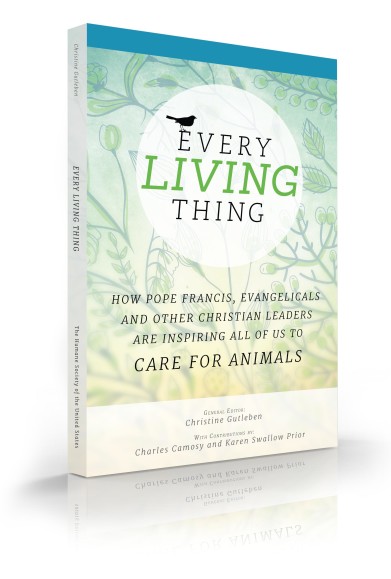 The world’s 2 billion Christians are hearing loud and clear teachings from their leaders about the welfare of animals who share our planet with us. Pope Francis’s new encyclical on creation care includes compassion for animals. Now, American evangelical leaders are collectively voicing a concern for animals that runs deep in their Protestant branch of Christianity. The Humane Society of the United States has collected the latest teachings from many Christian leaders to inspire individuals and spark fresh discussion in congregations.

Concern for animals by evangelical leaders may surprise some readers who haven’t heard this message in evangelical congregations, but this new collective evangelical message draws on centuries of such teachings by spiritual giants, from John Wesley and William Wilberforce to Sunday school pioneer Sarah Trimmer. In her Foreword, evangelical scholar and author Karen Swallow Prior points out that ultimately this thread of teaching dates all the way back to the Bible, arising from passages such as the depiction of Jesus as the Good Shepherd “who lays down his life for the sheep.”

This historic convergence of religious voices is moving many men and women in congregations nationwide to freshly study these teachings. “The providential timing of Pope Francis’s encyclical, just months before the release of the Evangelical statement on animals, provides people of faith with a more comprehensive and explicit set of responses to animal welfare issues and reflections on their value as God’s creatures.”

You may choose to read this new book as part of your individual, daily spiritual reflection, enjoying the many thought-provoking voices and biblical references. Or, you may be eager to discuss this with friends in your small group or Sunday School class.

The book’s writers point out that compassion toward animals runs through nearly every major religious tradition around the world—so additional material on other faith traditions is included in an appendix to help readers expand their awareness of these issues.

The Christian chorus is loud and clear. The Evangelical Statement on animals, just released in autumn 2015, concludes that Christians must “treat all animals as living valued creatures, deserving of compassion, because they ultimately belong to God.”

For the world’s more than 1 billion Roman Catholics, Pope Francis now teaches: “In the Judeo-Christian tradition, the word ‘creation’ has a broader meaning than ‘nature’ for it has to do with God’s loving plan in which every creature has its own value and significance. God’s love is the fundamental moving force in all created things.”

Explore these diverse religious voices, presented with helpful explanations for study and discussion by The Humane Society of the United States—and your view of the world around you will expand in depth and compassion.