EDITOR’S NOTE—Among Benjamin Pratt’s inspiring books is Ian Fleming’s Seven Deadlier Sins and 007’s Moral Compass, a spiritual exploration of the “7 deadlier sins” that best-selling author Ian Fleming set out to explore as he wrote his series of James Bond novels. That thought-provoking book, also known as A James Bond Bible Study—has sparked spirited small-group discussion around the world from New Zealand to New York City. In his column this week, Ben returns to teaching on the nature of sin as he grapples with the moral forces behind the rush to confirm a new Supreme Court justice. 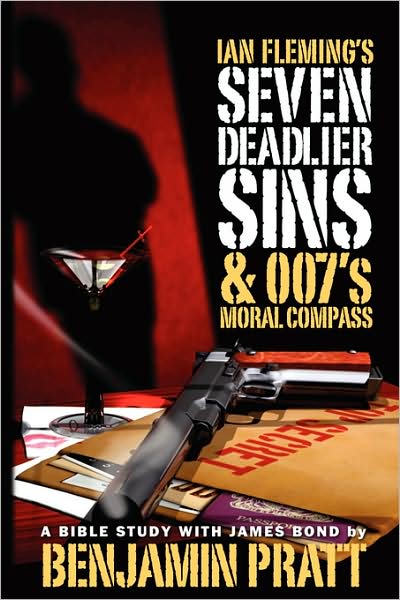 Care to read more about the context of “7 deadlier sins” as journalist and novelist Ian Fleming saw these moral challenges? In this book, author Benjamin Pratt invites readers to explore Fleming’s Bond novels and rediscover the moral threats that Fleming thought all of us will have to face in our world, today. CLICK ON this cover to visit the book’s Amazon page.

As the culture wars intensify since the death of RBG, numerous columnists, citizens and politicians have decried the hypocrisy of those rushing to fill her seat prior to the election. Hypocrisy is certainly a common evil but not an accurate description of the behavior we are seeing right ow.

In a war, it is best to accurately know the enemy, the one without and the one within ourselves. What is the proper way to describe the moral challenge we face? What is the name of this sin?

“For neither man nor angel can discern hypocrisy, the only evil that walks invisible, except to God alone,” declares John Milton in Paradise Lost.

The Greek root of hypocrisy, hupokrinein, a word sometimes translated as “pretending” or “theatrical,” refers to acting a part in a play. Hypocrisy is basic to our human condition. We all maintain the veneer of respectability, but none of us can be perfectly congruent in thought and action, so we are by definition hypocrites.

But that is not the name of the evil culprit with which we are grappling now. No, we are wrestling here with something else—with political fundamentalism or self-righteousness. Identifying this is crucial to the public debate.

Self-righteousness is the fuel of our cultural wars. When this particular tenet of our self is paramount, there is little or no room for tolerance. It becomes our orthodoxy to live and die by this vision. It becomes paramount over abiding in an integrated community, E Pluribus Unum. Armed with our convictions, the faithful are certain about the behavior of others and equally certain about the heresy of the infidels who are not part of their fold. The righteous are armed with the knowledge that God has shown them the right way, and all other ways are false.

Hypocrisy is the natural cover for such an arrogant soul. Hypocritical self-righteousness is about perceived height. Those who envision themselves towering above the common herd of humankind are responsible only to the vision behind their own eyeballs. The bitter irony is that these twin towers of duplicity—hypocrisy and self-righteousness—place the evil person beyond the possibility of reconciliation, redemption and community. The loss of community as our highest vision means the loss of E Pluribus Unum—out of many, one (the motto of the US).

Understanding the true danger of self-righteousness is crucial, because we tend to regard this problem as a rather benign blemish on the backside of the overly religious. From Dickens and Twain to Hollywood, self-righteousness is standard fare in American comedy. We tend to chuckle about it and forget it, but the truth is: Self-righteousness is a potentially deadly evil, the malevolent force behind war as well as more common forms of pain that we visit on each other for a whole array of political, cultural and religious violations.

The blood of the innocent flowed in more than one corner of the world on August 19, 2003. In Iraq, a truck loaded with explosives reached the corner of the United Nations Headquarters in Baghdad. The crime claimed the lives of Iraqis and foreigners, including one of the most talented United Nations diplomats of his generation, Sergio Vieira de Mello. On the same day a bus bomb in Jerusalem killed at least 18 people and injured scores more, including many children on their way home from the Western Wall. Both despicable acts were committed by self-righteous terrorists whose goal was to disrupt peace, plant fear, take vengeance and thwart the hopes of the majorities of Palestinians, Israelis and Iraqis who do not share the terrorist vision of the world. Imagining their vision superior to that of the majority, and buoyed by their vision of a vengeful god, they deny and disrupt attempts at building peaceful communities.

This has erupted close to home. In 1994, Paul Hill fired a shotgun into a pickup truck outside the Ladies Clinic in Pensacola, Florida, killing physician John Britton and his security escort James Barrett, plus wounding Barrett’s wife. A Presbyterian minister, Hill claimed the killings were “justifiable homicide” to protect unborn children. He remained defiant until his execution in September, 2003, self-righteously saying he felt no remorse for the slayings and was certain of his reward in heaven.

Terrorism is spiritually rooted in self-righteousness. Behind the eyes of the terrorist is a vision of the world that tolerates no other vision—to the point that all other perceptions of the world must be obliterated at any cost. Terrorists think in absolutes. They are purists.

Here’s a simple test for signs of self-righteousness in a person you’re encountering: Does this person want to talk with me, or only at me?

When individuals or groups fix the boundaries of political, cultural or religious tenets, especially ones that exclude people, the seeds of self-righteousness are sown. As we close the doors of dialogue, we are declaring: “We know precisely who God is and what Good is, and therefore, we know who the Devil is and what Evil is.”

We claim to vanquish doubt without realizing that doubt is an essential ingredient of faith. If you doubt this, simply read the journals of countless saints right down to modern heroes like Dorothy Day and Mother Teresa.

In the writings of Ian Fleming and others who have explored the deadly sins down through the ceturies—self-righteousness is the loftiest head of the evil dragon.

From a position of imagined superior height this swelled head lives, isolated with his or her own almighty, vengeful god, casting scorn and contempt on all the lesser beings for whom there is only negative judgment, and with whom there is no community.

Unless we conquer this war within, there will be no E Pluribus Unum!