Pop some popcorn and invite your friends. 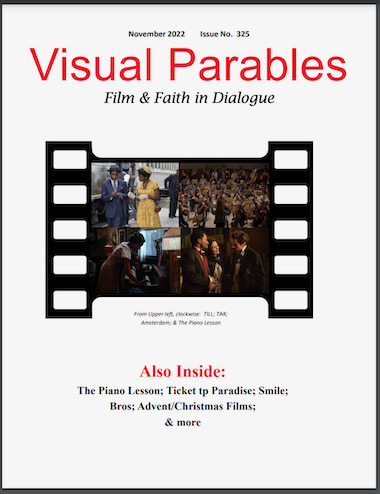 CLICK ON THIS COVER IMAGE from the November 2022 issue of Visual Parables Journal to visit a page explaining how to subscribe. You also will see a blue “button” you can click to read this November issue as a sample of what you’ll get in coming months.

For a decade, Read The Spirit magazine has appeared every Monday with a popular Faith & Film section closing out our weekly issues. We’ve heard from readers around the world who enjoy Film Critic Edward McNulty’s thought-provoking reviews along with the connections he draws to religious wisdom.

Each week, McNulty freely posts those new reviews in our online magazine for readers to share—and thousands of readers have done so from the more than 500 issues of Read The Spirit since he joined our team.

Meanwhile, McNulty has supported his work by selling annual subscriptions to the PDF-format Visual Parables Journal, which our team publishes as a paid monthly supplement to our online magazine. Every issue of Visual Parables Journal—which is easy to download and read on any digital device—is packed with complete discussion guides for the wide array films McNulty has been reviewing that month. Those discussion guides range from family films to the latest Hollywood blockbusters—and from provocative documentaries to special “indie” releases.

At this point in his celebrated career, McNulty has devoted nearly half a century to reviewing films—with a distinctive emphasis on connections he draws to faith. For the first four decades of his efforts as a film critic, his reviews were widely shared across the religious world via various magazines, websites and newsletters. Some of his collected discussion guides even appeared as paperback books. We especially recommend his Jesus Christ: Movie Star, a collection of discussion guides exploring a dozen different film depictions of Jesus.

In 2013, Read The Spirit agreed to become the host of McNulty’s wealth of faith-and-film materials—and to become the monthly publishers of his Journal. That’s why we say we’re coming up on the 10th anniversary of publishing with Edward McNulty.

Over this past decade together, we’ve also been hearing from a growing number of congregations nationwide where folks like to schedule their own faith-and-film festivals. They often are held in January, since it’s fun to go to the movies together during the darkest winter months.

We’ve also heard from small groups in congregations that enjoy their own faith-and-film discussions in an ongoing way throughout each year. Of course, the Visual Parables Journal is the perfect companion for such groups.

Finally, we know that many individuals simply enjoy reflecting on the many questions McNulty weaves into the discussion guides that make up each issue of the Journal.

Discovering Delightful Movies ‘No One Is Talking About’

What is the best thing about Visual Parables Journal, according to subscribers who have sent us feedback over the years?

Edward McNulty is known, each month, for looking beyond the most popular blockbusters. He likes to surprise readers with news about independent productions, films from around the world and he especially likes to find unusual movies about subjects of deep social concern. You’ll discover movies in Visual Parables Journal that you won’t hear about anywhere else.

Plus, ever since the pandemic began in early 2020, McNulty has been on the lookout for movies that viewers can stream online for free, or perhaps for a small rental charge. You can enjoy many of the films he writes about in the comfort of your own home.

Want to get started right now? Here’s a link to the web page that introduces Visual Parables Journal, which includes all the information you’ll need to subscribe.

Want to see more samples? Here’s the Visual Parables Journal page that features recent issues, so you can get an idea of the films Edward McNulty features.