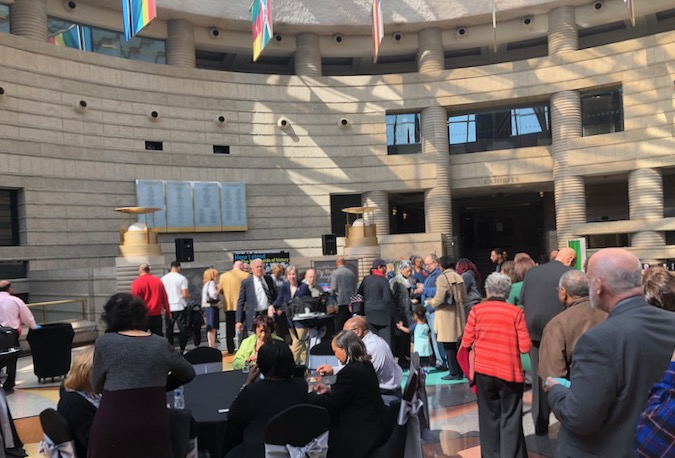 A GREAT BIG BOOK LAUNCH—This photo shows just the front of the line at Clifford Worthy’s book signing in Detroit. The line kept looping around the rotunda. Worthy, although 90 and still recovering from recent surgery, kept signing books for an hour. As they stood in line, eager readers could not even see Cliff sitting at his table—yet they waited patiently for their chance to meet this real-life hero, purchase his book and have him write his name inside the front cover. These readers were cherishing their chance to play a role in a historic moment.

U.S. Rep. Debbie Dingell set the tone for the book launch at the Charles H. Wright Museum of African American History in Detroit on Saturday by reading from the Foreword to Clifford Worthy’s memoir, The Black Knight: An African-American Family’s Journey from West Point—a Life of Duty, Honor and Country.

Just months before his death in February, Debbie’s husband—U.S. Rep. John Dingell—wrote that Foreword as a stirring call to all Americans to reclaim our compassionate community values. Why is such a clarion call needed now? Dingell wrote that our cooperative values are threatened by what he described as the “racism and all the savagery that has been resurfacing in the last couple of years that should have no place in America.”

As Debbie Dingell talked, the men and women who sat in the audience realized that their participation in this book launch was a visible, public act of opposition to racism in America. By coming and taking part, they were part of a historic moment. 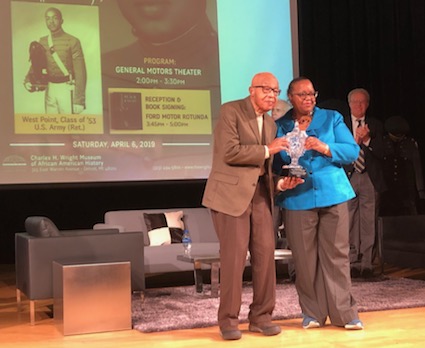 BOOKS BUILD COMMUNITY—This launch event held historic significance. Neil Barclay, the president of the Detroit museum, welcomed the crowd by saying that Clifford Worthy, and his new book, both illustrate and amplify the core mission of the museum. “We promote reading. And, we promote reading about our heritage,” Barclay said as he urged the audience to read Cliff’s story—and tell others about it. The museum staff symbolically sealed this ongoing relationship by presenting Cliff and his daughter, Wayne County Prosecutor Kym Worthy, a crystal trophy marking the importance of their family’s story as a part of African-American history.

Debbie—who now continues the Dingell family’s nearly 90-year record of public service in Washington D.C.—looked out across the crowd in the main theater of the Detroit museum. Her late husband’s appeal in the Foreword of The Black Knight could not have been more timely, she told these men and women.

Why is this book an antidote to racism? Debbie said that, as readers immerse themselves in Clifford Worthy’s life story, they realize that their own families—whatever their race or ethnicity might be—share core American values with the Worthy family.

Debbie read some of her husband’s words:

“This memoir of retired Col. Cliff Worthy may seem like the story of one family, but it really is the story of many American families. Cliff’s story reminds all of us that—at our best as Americans—we are called to help each other build a stronger, healthier community. America’s great strength is that we come together here—we come together in all of our wonderful diversity, reflecting our families’ origins in places around the world.”

The book launch was a stunning example of how far the principles we keep preaching at ReadTheSpirit magazine (and at our Front Edge Publishing house) can carry an author into the heart of a community with an inspiring message. Speaker after speaker at the event stressed this point: We share the goal of touching other lives with compelling stories, deep truths and fresh ideas that invite readers to cross boundaries they did not expect to cross.

As Cliff Worthy himself put it at the event: “This is not about me wanting to be lionized by all of you. This is about passing along important stories—and hard-earned wisdom that all of us can use in life.”

Care to read more about our principles? You’ll find them listed in the About page of our Front Edge Publishing house.

We have a 12-year history as a publishing house (in the pages of ReadTheSpirit online magazine and at Front Edge Publishing house) of describing good books as “a community between two covers.” We say: “Good media builds healthier communities.” And we have become known internationally for our commitment to summoning what we call “Allies & Angels” around new books.

Those principles sprang vividly to life on Saturday. 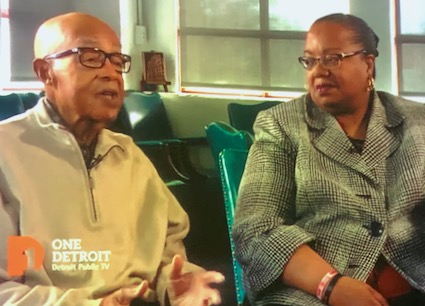 THE SIGNIFICANCE OF MEDIA ALLIES—Cliff Worthy talks with his daughter, Wayne County Prosecutor Kym Worthy, in a short video about his book produced for American Black Journal through Detroit Public TV. (You can watch the 7-minute video below.)

Months before the event at the museum, Cliff and his close friends had summoned their own allies and angels to help them stage this event. They reached out across the West Point alumni network, their extended family, neighbors and co-workers. They appealed to prominent community leaders who share a similar vision.

Like other successful authors, Cliff and his friends focused especially on contacting media personalities whose involvement in the launch was sure to resonate far beyond that single event.

One of the most important media allies was Mildred Gaddis, among Detroit’s prominent radio voices. What Mildred Gaddis provided was context from an African-American perspective that built on Debbie Dingell’s opening message.

Cliff’s daughter Kym Worthy introduced the radio personality: “I am blessed to have some great male and female friends. She is a Detroiter through and through. You know her as one of the gleaming, prophetic voices of AM radio—please welcome my good friend Mildred Gaddis.”

Mildred Gaddis’s role was to help the audience understand the significance of Cliff’s story within the 20th-century struggle against racism. In doing so, she helped each man and woman in attendance feel as though they were sharing in this historic moment by attending the launch and reading his book.

She began with a quote from the famous Catholic theologian Cardinal Leo Suenens: “Happy are those who dream dreams and are willing to pay the price to make them come true.”

She paused and then set The Black Knight in the sweeping context of the campaign for civil rights:

“I want you to travel with me for just a couple of minutes. It was the late 1940s. Far-reaching changes and mobilization were occurring across the United States. White culture strove to make non-whites invisible with segregation and discrimination as Southern blacks continued the great migration north; and the federal government brought in Mexican labor via the Bracero program to take up the slack in labor while U.S. troops were overseas. The rise of the civil rights movement was on in America and Brown vs. Board of Education, which was going to strike down segregation and discrimination in schools in 1954, was lurking around the corner. Across the world, in 1948 the national party of the Dutch Afrikaners began the policy of Apartheid.

“And as the story of Col. Worthy reminds us, President Harry Truman ended racial segregation in the U.S. military in 1948. … The Black Knight is the story of a decision to go to West Point from Michigan that would change the course of one man’s life while impacting and creating a phenomenal legacy shaping many lives. The Black Knight is not just Col. Worthy’s memoir, it’s a great American story—a great American story!

“Col. Worthy teaches us: Number one, that God is! Two, that ignorance is a sin. And, three, that the family is the greatest institution on earth. And now you can clap—those are important lessons!”

Gaddis paused and then concluded: “In reading The Black Knight, we learn that—in the words of Muhammad Ali: ‘When the mission is great, the odds don’t matter.’ The Black Knight also reminds us—in the words of Helen Keller: ‘Character cannot be developed in ease and quiet; only through the experiences of trial and suffering is the soul strengthened, ambition inspired and success achieved.’ The Black Knight is of great value not only to those of us who are gathered here today—it’s of great value to the whole world.”

When Media Allies Amplify Each Other

As Cliff Worthy’s family and friends called in every favor with every media professional they could reach, the effect built until those media messages amplified each other.

Months of conversations with Rich Homberg, the head of Detroit Public TV, led to the producers of the nationally broadcast American Black Journal series to produce a seven-minute report on The Black Knight. Not only did that report air in the show’s regular schedule last month—it now continues to stream across public television networks online and YouTube.

As he watched that process unfold, Homberg himself was impressed. He emailed Cliff’s friends and family enthusiastically: “What a great tale! What a great man!”

The centerpiece of the Detroit launch event was a showing of this video on the theater’s big screen. And now, even though most of our readers were not able to visit at the museum on Saturday—you can see that video on the screen below.

You can become part of the story.

The biggest surprise for publishing professionals was the crowd’s response in Detroit. Typically, at author appearances nationwide, a table is set up after the main program for the author to sell and sign books—usually resulting in no more than 10 percent of attendees actually buying a book. Selling a small handful of books is considered a good day for an author.

At the museum—the long and winding line of eager book buyers was stunning.

Also surprising was the news that spread along the waiting line just a few minutes into the signing process: The hardbacks had sold out almost immediately!

“Well, it’s a good kind of problem to have,” said Walter Oehrlein, a fellow West Point alum and one of the friends who was tireless in helping Cliff Worthy throughout the publication process. Oehrlein had equipped himself with a stack of colorful postcards, showing the book cover on one side—and information about ordering the book online, on the reverse side.

“So far, we’ve still got plenty of the paperback copies,” Walter said as he moved along the line of waiting men and women, greeting each person and offering a card. “I’m passing out as many of these book-cover postcards as I can to the people who really wanted the hardback. They can order one online. And they can take the card home and give it to someone else who will want the book.”

Get your Copy—Become a Part of the Story

The Black Knight is available in that hardcover “forever copy” from Amazon and Barnes & Noble. Want a paperback instead? Paperbacks also are available. 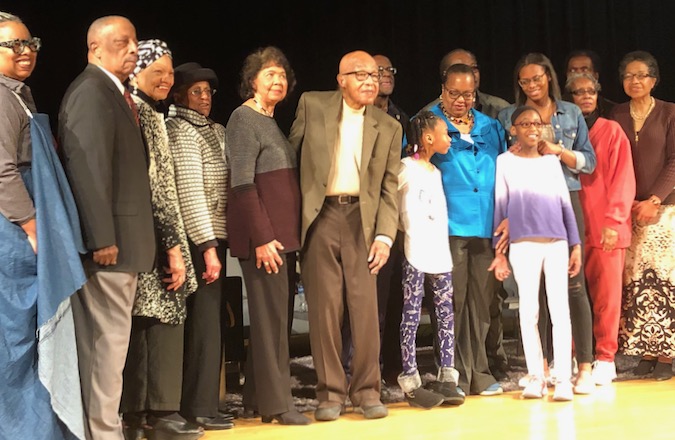 CALLING ALL FAMILY! One key to Cliff Worthy’s far-flung network of allies was his ability to call on the talents of many men and women across his extended family. At the Detroit event, they gathered center stage to demonstrate one of the central values in Cliff’s memoir: the importance of family.