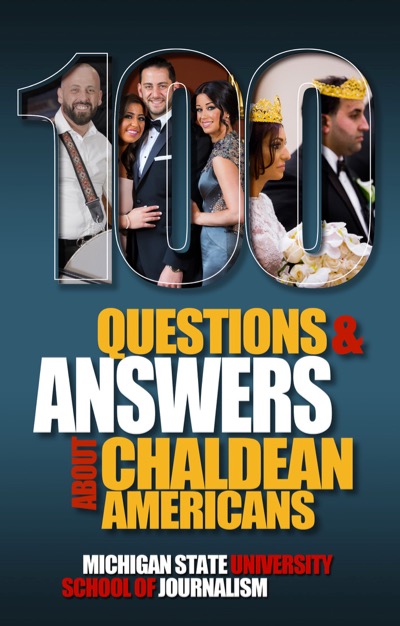 They are among the world’s oldest communities that remain thriving in the 21st Century and proudly maintain their ancient language and traditions. They rank among the least-known and most-misunderstood ethnic groups in the U.S. That dilemma should matter to all Americans in 2019—because many of these families are fighting life-and-death legal battles over whether federal authorities in the U.S. will deport some of their loved ones to war-torn Iraq.

They are the Chaldeans. Millions of Americans have never heard of them. Those who have—mainly men and women who attend weekly Bible studies in their churches—think the term refers simply to an obscure ancient tribe.

The fact is that this ancient people, mentioned many times in the Bible, fostered a vibrant, creative community of descendants, most of whom have proudly and successfully become Americans today.

That revelation—of a vibrant and creative ancient people living among us in the U.S.—is the exciting subject of the latest volume in the Michigan State University School of Journalism “Bias Busters” series, 100 Questions and Answers About Chaldean Americans. (That’s the paperback link to Amazon. The book also is available for Kindle as well as via Barnes & Noble.)

Where Do Chaldeans Come from?

FROM THE “ORIGINS” SECTION OF THE NEW BOOK …

Chaldeans and their predecessors, the Babylonians, made major contributions in writing, science, technology, mathematics and astrology. They devised the time system we use today with its 60-second minutes and 60-minute hours. They also described the circle as having 360 degrees. Their understanding of astronomy and ability to predict movements of heavenly bodies sparked what some have called the first scientific revolution. Across the ancient world, Greeks and Romans used the very name “Chaldean” for the astronomers of Mesopotamia.

Why Are Chaldeans in the News Today?

FROM AN ARTICLE BY ASHOURINA SLIWO IN THE CHALDEAN NEWS …

Working with his students, author and Michigan State University journalism professor Joe Grimm has published a number of cultural competence guides about various cultures. His 15th and latest guide puts the spotlight on the Chaldean community. 100 Questions and Answers About Chaldean Americans came on the heels of the raids led by Immigration and Customs Enforcement (ICE) in June of 2017 and the detainment of hundreds of community members. These community members faced deportation.

With these massive raids came many misunderstandings regarding the Chaldean community. It became clear to Grimm that a cultural competence guide about the community was now more important than ever. “With people being detained for possible deportation, we had to act,” explained Grimm. “It is a journalist’s job to report relevant information when it is needed. We saw this guide and these times as our clear obligation to serve the public.”

The signature commitment of this team of MSU journalism students and faculty is: “We are answering the questions everyone is asking—but nobody is answering.” That certainly is true of this unique new volume. There simply is no other resource as timely, wide-reaching and so carefully vetted by a blue-ribbon panel of experts. Some of the 100 questions answered in this guide:

What Are Some Chaldean Food Traditions?

The book describes the unique culinary contributions of Chaldean culture. While many of these foods echo longstanding culinary traditions of the Mediterranean basin, Chaldeans put their own ethnic twists on these foods. Several complete recipes are included in the book.

One favorite recipe in the book is for chicken kabobs, called Kufta ‘d Kathatha.

Another treasured recipe details all of the ingredients to make the Chaldean version of Baharat, the flavorful “all spice” blend that is popular in Greek and Arabic cuisine as well.

How Do I Find Chaldean Leaders Today?

What makes this book so valuable for students, educators, social service providers and anyone involved in community leadership are the resource sections at the end of the volume. The MSU research team details books and articles you can use to learn more about the Chaldean people and their history and culture. Plus, there’s a listing of currently active Chaldean organizations along with Internet links.