AN EXCERPT FROM … the opening pages of For the Life of the World—Theology That Makes a Difference, written by Miroslav Volf and Matthew Croasmun. You will also want to read David Crumm’s reporting about this new book, based in part on a new interview with Volf.

VOLF—I grew up in a place and at a time when we, a small group of teenagers who knew no better, thought that no intellectual endeavor could possibly matter more than doing theology. The time was the early 1970s. The place was Tito’s Yugoslavia and, for me specifically, a house in Novi Sad at the end of a dirt road—in fact, two small rooms that my father, a confectioner turned Pentecostal minister, had built in its courtyard with his own hands. From its windows, through low-hanging branches of a cherry tree, I had a fine view of an electrical substation at the edge of a swamp. … 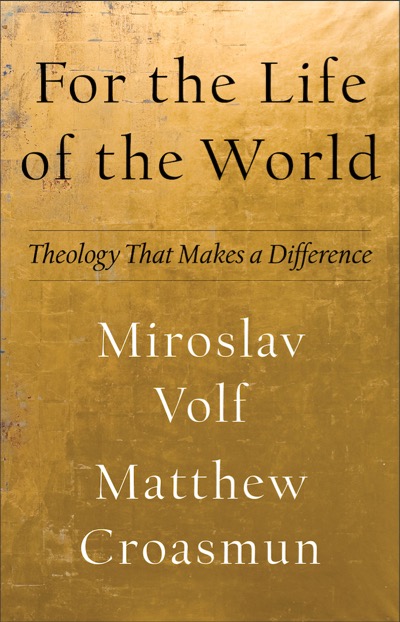 I started spending days and nights in one of these two makeshift rooms reading the Bible, C. S. Lewis, Plato, Bertrand Russell (yes, go figure!), and, later, Karl Barth, Rudolf Bultmann, Wolfhart Pannenberg, Simone Weil, and Joseph Ratzinger—and teaching myself English and Greek in the process. I was part of a small group of young theological enthusiasts. Except for its oldest and most zealous member, who had read the entire Bible, cover to cover, thirteen times in the first year of his faith journey, all of us were, roughly, halfway through high school.

For us, theology was about the unbreakable tie between human transcendent longing and our mundane strivings, about the power of Jesus Christ, the Word of God and the Lamb of God, which stood in irreconcilable contrast to the power of soldiers, ideologues, bureaucrats, and secret service agents; it was about the right of persons—about our right, too, of course—to determine the shape and the direction of their individual and social lives, rather than, like some wound-up tin soldiers, to simply march in unison to the drumbeat of a failing revolution.

Theology was about a new world coming from God and in God’s way, a new social order whose creation and survival wouldn’t demand thousands on thousands of dead as did the order in which we were born—my own father having come a hair’s breadth from becoming one of them. In short, theology was about the truth and beauty of human existence in a world of justice, peace, and joy.

For us, no endeavor could matter more than doing good theology—though for me personally getting hold of a pair of US-made Levi’s bell-bottom jeans, Italian platform shoes, and a tight-fitting Indian gauze shirt wasn’t far behind in importance. As we spent our days and nights (yes, lots of long nights) reading and arguing about all matters theological, we had no idea that out in the wide world of Western academies, where we all wanted to study, theology was in a serious crisis.

VOLF and CROASMUN—Like disoriented and impoverished descendants of a monarch long deposed, some of us theologians live under a cloud of doom and futility, nostalgic for the glory and power of our ancestors but hopeless about the future. Theology had its time, but that time is no more. It would have been better, we think, had we given up long ago on the untimely endeavor and devoted our energies to more reputable academic pursuits or some more useful activity.

Others among us feel like impoverished but proud aristocrats, with fraying clothes and crumbling dwellings but a soaring sense of self-importance. We continue to do well what theologians have always done—what we feel theologians have always done—but we do so with a big chip on our shoulders. If only other academics or the general public would recognize our greatness and pay attention to the fruits of our wisdom, ancient wisdom, God’s wisdom! If only some rich heiress would fall in love with us and return the proper luster to our clothes and dwellings!

Still other theologians, perhaps the majority of us, have acquired democratic sensibilities and settled into daily routines as “knowledge producers” employed by institutions that compete in global markets. We teach our courses and write reviews, scholarly articles, and an occasional book. We work hard to accomplish what it takes to get tenure (and nervously bite our nails through the process). We have a job, and we want to do it well: to add our own grain of intellectual sand to the vast metropolis of knowledge and to instruct students about a tradition that we aren’t sure is truly alive anymore.

In one way or another, theologians seem to have lost theological eros, our sense of divine calling to grapple with the ultimate questions of human existence and of the world’s destiny.

VOLF—By now I have been a student of theology for forty-five years, thirty-five of them as a teacher. In a sense, I wrote this book to give myself a reason to keep faith with the dream of the teenager-theologian I once was. But my concern isn’t primarily autobiographical integrity; after all, platform shoes or their current equivalents don’t matter to me nearly as much now as they did then. My concern is the self-marginalizing and self-defeating response of theologians to the obsession with acquisition of resources and entertainment in the broader culture and especially to the dominance of the sciences in modern universities.

Along with other scholars in the humanities, we theologians have sought to recast our discipline so as to acquire a legitimate home in the great edifice of science, but instead we have “dug a hole and pitched [ourselves] to its bottom.” The price we paid for the right to make at best marginal additions to the storehouse of knowledge was the loss of the ability to address the most profound and important questions of human existence, which the sciences, by the very nature of their methodologies, are unable even to take up, let alone to answer.

I became a student of theology in search of true life in the midst of a false one; I am a theologian now for that same reason. This book explains why and invites others to join the endeavor