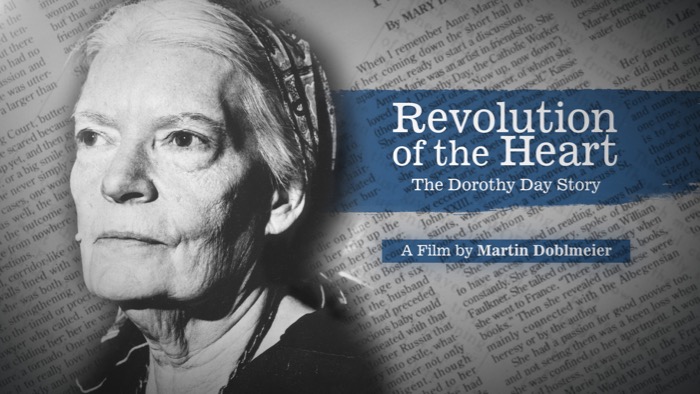 One of the greatest evils of the day … is a sense of futility. Young people say, “What good can one person do? What is the sense of our small effort?” They cannot see that we must lay one brick at a time, take one step at a time; we can be responsible only for the one action of the present moment. But we can beg for an increase of love in our hearts that will vitalize and transform all our individual actions, and know that God will take them and multiply them, as Jesus multiplied the loaves and fishes.
One of the most often-quoted passages from Dorothy Day’s writings.

So many readers of our magazine are telling us, in March 2020, that they truly feel a Spirit flowing through our Reading each week at ReadTheSpirit magazine. That’s certainly true about our decision to feature an interview with filmmaker Martin Doblmeier about his new documentary: Revolution of the Heart—The Dorothy Day Story.

AND NOTE: You can stream this inspiring film, right now, from a link (below) after this brief Cover Story.

As a journalist, I have known Martin—and recommended his many films—over many decades. What remarkable timing this month! Martin released his film for free PBS broadcasting—and free streaming—in this same month when millions of Americans are isolated and anxious over the deadly COVID-19.

Dorothy Day’s life has been described variously as: A modern saint, a social activist on behalf of the poor, a pacifist who was often arrested for her protests, an author of inspirational books. Wikipedia calls her “the best known radical in American Catholic Church history.”

Most importantly today, Dorothy Day responded to the vast, life-threatening crisis of the Great Depression in 1933 by founding a tiny newspaper called The Catholic Worker on New York City’s Lower East Side. Inspired by a partnership in ministry with Peter Maurin, who was steeped in Catholic teachings from the likes of St. Francis of Assisi, they opened small soup kitchens.

The need was vast! Millions of families were hungry and homeless. Their little operations could only help a relative handful of people. Why even try?

“It’s that kind of question that drew me to make this film,” Martin Doblmeier said in our interview about the film. “The thing that really captured me more than anything else is this whole notion of personalism. I’ve spent a lot of time on college campuses and in seminaries with people trying to figure out their vocations—and it’s easy to get overwhelmed with the world’s great problems and great issues.

“You can wonder if there’s anything you can possibly do. Dorothy Day said you can’t change everything—but you can change the life of the person in front of you. You don’t have to fix the whole world, but you are called as a person of faith to try to fix the situation that’s right in front of you.

“There’s a path here for me to actually pick up and do something. She did not overthink things, she simply saw the issues and challenges in front of her and she responded in the best way she knew how. She didn’t spend time developing a long-term strategy. She and Peter and those around them saw the needs around them and they put their hearts and souls into responding to that.

“Ultimately she took an approach to healing the wounds of this country that was unique in her time and we need to hear about that today.”

Watch ‘Revolution of the Heart: The Dorothy Day Story’—right now

We are not able to “embed” the viewing screen on this ReadTheSpirit page. However, we can provide direct links to the streaming page.

First, here is a link to the Dorothy Day page at PBS, where you will find a streaming screen you can view.

Second, here is a direct link to the stream itself.

Both links will take you to the same source. As we prepared this Cover Story for publication, we found that the streaming options varied on different phones, tablets and computers—so we are providing both links.

Our faith-and-film columnist Ed McNulty—editor and film critic of the Visual Parables Journal—has a full review of this new documentary. As always, Ed couples his review with other useful resources if you would like to spark a small-group discussion about Dorothy Day. Remember: Many small groups are meeting “virtually” these days and a stream-online-then-discuss-online program is ideal for this time of self isolation.

Over the decades, Martin Doblmeier has created many inspiring documentaries. You can learn about all of his work at his home website.