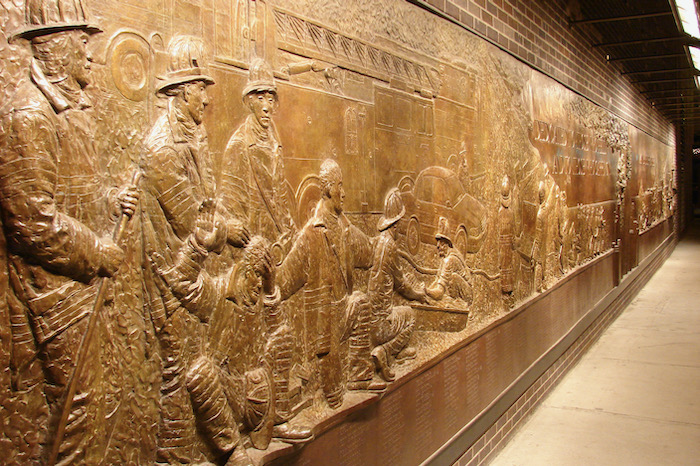 The FDNY memorial wall is a 56-foot-long bronze wall of cast bas-relief bronze that honors the 343 firefighters who gave their lives in service to the public during the attacks. Commissioned by FDNY and unveiled in 2006 as a memorial to the fallen firefighters, it lists all of the fallen firefighters names, and is installed in the west wall of Engine Company 10–Ladder Company 10 on Greenwich Street between Albany Street and Liberty Street, just across from Ground Zero.

A Reflection on the 20th Anniversary of 9/11

Some anniversaries are joyful, but not this one.

Twenty years ago, on September 11, 2001, al-Qaeda terrorists took control of four passenger airliners. Two were flown into the towers of the World Trade Center in New York City. A third was crashed into the Pentagon. And the fourth was heading toward Washington but was driven into a Pennsylvania field when passengers overwhelmed the terrorists.

Almost 3,000 people died, 25,000 were injured, and many others suffered long-term health problems. 9/11 stands as the deadliest terrorist attack in human history.

In response, Americans came together in the face of a common enemy. The motto “United We Stand” appeared everywhere, flags were flown and churches were packed. Muslim organizations quickly condemned that attacks, and President Bush made an appearance at an Islamic Center in Washington. He spoke of the valuable contributions that Muslims made to the United States every day, and called for them to be treated with respect.

September 11 was a day of horror, but it pulled Americans together in a remarkable way.

To be sure, there were many who felt excluded.

My next-door neighbor, an Iranian teenager who was a member of the Baha’i faith, was terrified of what his classmates would do to him. Turban-wearing Sikhs across the country were falsely accused of being terrorists. Many American Muslims were the victims of anger and bigotry. The slogan “United We Stand” did not include everyone.

Twenty years later, we are having a hard time standing together. Fortunately, the prophet Isaiah—revered by Jews, Christians, and Muslims—has words of guidance for us. The church I serve as pastor, Fairfax Presbyterian Church in Virginia, gathers for worship each week under a verse from the prophet that appears on the wall behind the pulpit, “My house shall be called a house of prayer for all peoples” (Isaiah 56:7).

Jesus began his ministry in Nazareth by reading from the scroll of the prophet, and he went on to quote Isaiah eight times during his ministry—more than any other prophet. Both Isaiah and Jesus were committed to welcoming and including all of God’s children in the community of faith.

Unity remains a goal for us in the United States, and the challenges of 2001 are not behind us. If anything, they are bigger than ever. After 9/11, the danger was al-Qaeda. But today, our greatest threat is domestic terrorism—the people who attacked the Capitol earlier this year were extremists from our own country.

Now, more than ever, we need to respond to the invitation of the prophet Isaiah to “stand up together” (Isaiah 50:8). But how do we do this? How do we overcome polarization and take a united stand?

The first step is to teach the best of our religious traditions. Once again, the prophet Isaiah has some guidance for us: “The Lord GOD has given me the tongue of a teacher” (Isaiah 50:4). As servants of God, we are to be teachers of grace and truth and justice. We are to treat others as we want to be treated, and to see everyone as a child of God, made in the image and likeness of God. We are to lift people up, not knock them down. Help them, not hurt them. Love them, not hate them. At the same time, we need to be humbly honest about the failings and limitations of our traditions, realizing that many of our traditions have led to hatred.

Next, we are challenged to cooperate with God.  “The Lord God has opened my ear,” says the servant in Isaiah, “and I was not rebellious, I did not turn backward” (Isaiah 50:5). God is calling us into a better future, and our challenge is to follow where God is leading. We are being rebellious when we turn around and follow other voices. Not everyone worked for unity after 9/11, so this anniversary is giving us an opportunity to embrace the challenges we may have missed twenty years ago.

Peter Marty is a Lutheran pastor who is concerned about preaching in a time of deep political polarization. He has noticed that many worshipers are ready to assign a political motive to everything a preacher says. Preachers get in trouble for saying too much or too little about Black Lives Matter, about the Capitol invasion, or about the presidencies of Donald Trump and Joe Biden.

In the face of these challenges, Marty tries to preach sermons that help individuals to “meet God or be met by God.” Yes, he certainly feels called to reflect on cultural and political events, but he tries to do so in a way that offers new insights and fresh perspectives. He is not interested in lining up with partisan political positions.

But there is a problem, according to Marty: “many Christians now interpret faith through the prism of their political ideology.” It’s true for Christians on the right and on the left. And this approach is the opposite of what Isaiah recommends. Our challenge is to let the Lord God open our ears, and not rebel against God when we hear a challenging word. In a world of partisan politics, our goal should be to cooperate with God and move forward in God’s way.

The way of God always involves the building of bridges between people of diverse perspectives. “We are dividing into hostile tribes,” says retired General Jim Mattis. After four decades in the Marine Corps, Mattis knows that our internal divisiveness is often more threatening than our external enemies. Our focus should be on “rediscovering our common ground and finding solutions,” says Mattis.

Twenty years ago, the motto was “United We Stand.”

Today, our challenge is to do a better job of standing together by teaching the best of our religious traditions, cooperating with God and finding common ground.

A version of this column appears in the preaching journal Homiletics.