Victorian townhouses along the river in Occoquan, Virginia, home of Harley Camden, protagonist of the novel City of Peace.

About 10 years ago, an imam walked into my office at Fairfax Presbyterian Church with a Christmas present. He was the leader of the nearby Turkish mosque, a man with a big smile and a warm spirit. 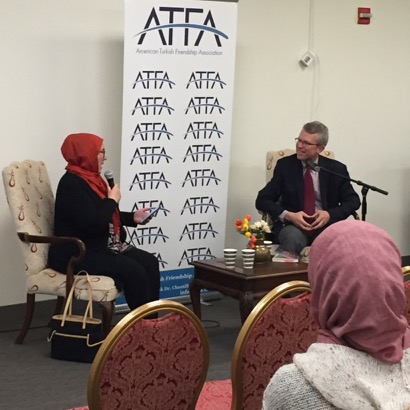 Margaret Johnson, a member of the Ezher Bloom Mosque in Chantilly, Virginia, interviews Henry Brinton about the interfaith themes in his novel City of Peace in April 2019.

He and I became friends and went on to lead two clergy trips to Turkey, a country with a rich history of interfaith relations. When the rulers of Spain expelled its Jews in 1492, Turkey welcomed them. And while there have been interfaith conflicts over the years, Jews, Christians and Muslims have lived together in peace through much of Turkish history. Back in the US, members of the mosque have helped us to feed the homeless on cold winter nights, and we have celebrated the end of Ramadan together under a tent in our church parking lot.

I often preach about the importance of interfaith cooperation, but I find that sermons have their limits. People naturally push back against sermons—a common expression is, “Don’t preach at me.” And interfaith events can be easily declined by those who don’t want to leave the comfort of their religious traditions.

Not that this story-telling approach is original to me. Jesus didn’t give lectures on heaven, but taught through parables such as, “The kingdom of God is as if someone would scatter seed on the ground” (Mark 4:26). And Jewish rabbis continued this approach through midrash aggadah, an approach to biblical interpretation that centers on the story or characters of the biblical law.

In line with this tradition, I am delivering a message about the need for deeper interfaith relations, especially in a time of Muslim bans and terrorist threats, through my novel City of Peace. In it, a Methodist pastor named Harley Camden is sent to Occoquan, Virginia. Soon after his arrival, he is asked—as the only clergy in town—to visit a prisoner named Muhammad Bayati, an Iraqi immigrant accused of murdering his daughter.

After introducing himself, Harley tells Muhammad that he has recently lost his own daughter and wife. Looking Muhammad in the eyes to gauge his reaction, he says, “They were killed by terrorists at the Brussels airport.”

Muhammad’s eyes well up, which is not the reaction Harley expects. “I was informed of your loss,” he says. “You have my sympathy.” Harley thanks him but feels a little off balance.

“You may know that the Qur’an says that whoever kills a person unjustly, it is as though he has killed all mankind,” says Muhammad. “I condemn the killers of your wife and daughter.”

The two men go on to talk about justice, God, and even Jesus—a prophet for Muhammad and the messiah for Harley. Then Harley says, “Our Bible says that God is love.”

Muhammad cocks his head slightly and replies, “That is different from our understanding. We have many names for God, but love is not among them.” He knows that “All-Compassionate” is one of the 99 names for God, but so is “The Distressor.” In Islam, none of these attributes of God is identical to God’s essence.

“For Christians, love is at the core of who God is,” explains Harley. “God reveals his love by sending Jesus. And the response we are supposed to make is to love one another.”

“I would agree with that,” says Muhammad. “Loving God does require that we love the people around us.” Harley begins to see that he and Muhammad have much in common, and that he is wrong to be prejudiced against someone with a commitment to love of God and neighbor.

This, then, is a portion of my parable, my midrash aggadah. Church members who have little interest in interfaith relations are attracted to the whodunnit aspect of the story, and are learning about Muslim attitudes through Muhammad, a multidimensional and sympathetic character. Readers identify better with Harley, a flawed and grieving man, than they do with a minister in robes.

But a story is no guarantee of interfaith harmony. When I presented City of Peace to members of the Turkish mosque, one woman complained that I had slighted Islam by saying love was absent from the names it gave God. But after a long discussion between two imams, one said, “On this point, Pastor Brinton is correct.” Whew. I was relieved.

Novels can ignite important conversations about matters of faith and morality, and they can get people talking outside the walls of the church. Such conversations can lead to new visions for our life together, and draw people together around values that are common to diverse faiths and cultures.

I don’t plan on giving up the pulpit, but I am glad to have discovered a less preachy way of preaching.