THIS IS THE SEASON of pop-culture blockbusters—terrific opportunities to welcome newcomers to your congregation. Last week, we reported on the James Bond mania that will run through spring—and we recommended our sure-fire James Bond book that already has been used by small groups around the world. Today, we’re reporting on the ways that Twilight also can fuel fresh interest in Bible study. Think about the small groups currently meeting in your congregation. In many small to mid-sized congregations, Bible study means: older adults. Announcing a short-term Twilight Bible study is a great opportunity to welcome girls and younger women into such a group.

We recommend Jane Wells’ Glitter in the Sun. You can read even more about Jane and her Twilight Bible study in her regular author’s column. ReadTheSpirit publishes inspiring materials for Christians and non-Christians. In Glitter in the Sun, Jane’s approach is perfectly pitched for Christian churches, especially congregations that take Bible study seriously and share a lively evangelical perspective on faith. What do we mean by that? We’re talking about churches where people like to dig into scripture and talk about the daily role of faith in their lives—in other words, tens of thousands of congregations coast to coast. Perhaps a church just like yours.

JUST HOW BIG ARE TWILIGHT MOVIES AND BOOKS? 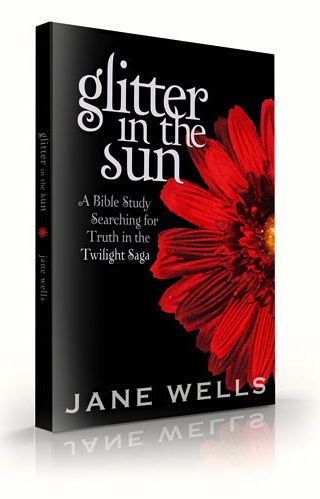 HUGE! You’ll enjoy our 2011 report on the gigantic reach of the Twlight series. Now, there’s more! Last year, we reported that the Twilight films, so far, had taken in $1.9 billion. Today, prior to the release of The Twilight Saga: Breaking Dawn—Part 2 on November 16, the combined Twilight films are up to $2.42 billion. Each new Twilight movie takes in another $700 million—so it’s safe to conclude that the five Twilight movies will top the three Lord of the Rings films this winter. (If you’re keeping track: Three Chronicles of Narnia films now total $1.6 billion, nearly two dozen James Bond movies (with Skyfall about to drop this month) have racked up more than $4.8 billion and the eight Harry Potter movies have reached a stunning $7.7 billion.)

And those are just the movie numbers! How about the books? They’ve sold more than 116 million copies worldwide. That’s territory reserved for all-time best sellers like Charles Dickens (for Tale of Two Cities), Cao Xueqin (Dream of the Red Chamber), J.R.R. Tolkien (for both Rings and Hobbit), Agatha Christie (And Then There Were None) and Antoine de Saint-Exupéry (The Little Prince). Of course, way above such numbers are Bible sales.

MOVIES AND BOOKS: SO, WHAT’S TWILIGHT ABOUT?

Confused about Twilight? The Saga began as a series of Young Adult novels, aimed primarily at girls, but it has crossed over now to women—and to some men who enjoy sharing in the tales that interest their significant others. If you’ve read this far and you’re not familiar with these stories of vampires and werewolves, we certainly can help you. The best way to do that is to recommend, once again, our guide Jane Wells. She created this Quick Start Guide to Enjoying the Twilight Saga Movie Debut.

TWILIGHT BIBLE STUDY: IS THIS A CRAZY IDEA OR WHAT?

You may still be scratching your head. Invite a vampire to church!?! We are not alone in recommending this kind of pop-culture connection. Abingdon Press, the publishing arm of the nation’s third largest denomination—the United Methodist Church—has published Clay Morgan’s Undead, a guide to welcoming zombies, vampires and all manner of undead into your congregation. ReadTheSpirit recommends Clay’s book and we published an in-depth interview with Clay. More recently, Jane Wells wrote an update on Clay that includes a short video about Undead. Compared with Jane’s book, Clay’s Undead is more of a manifesto about this whole concept of pop culture connection in those eerie realms. And Clay’s focus is mainly on zombies—another specific craze these days and one that tends to attract more guys than girls. But Clay’s work eloquently makes our point: Want to grow? Want to reach unchurched people? Connect with the tales that are exciting people today. Two thousand years ago, a wandering Jewish teacher in the Middle East had the same idea—teaching by telling popular stories. Hmmm. Not a bad idea.