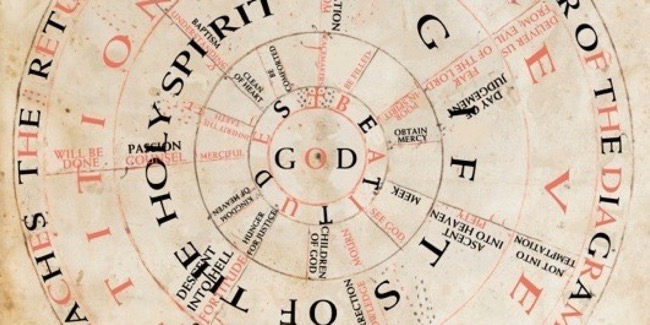 Detail of the Liesborn Prayer Wheel translated into English. 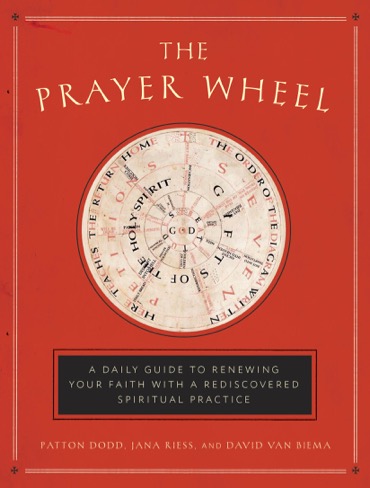 For Christians, the re-discovery of the 1,000-year-old Christian Prayer Wheel is such a revelation that the opening pages of the new book about this remarkable find provide a Who’s Who of best-selling Christian writers and teachers. They’re all encouraging us to pay special attention to this milestone.

So pick your favorite author from this list and that should move you to click over to Amazon and order your own copy of the new book. Here are half of the dozen famous names you’ll find as you open the cover: 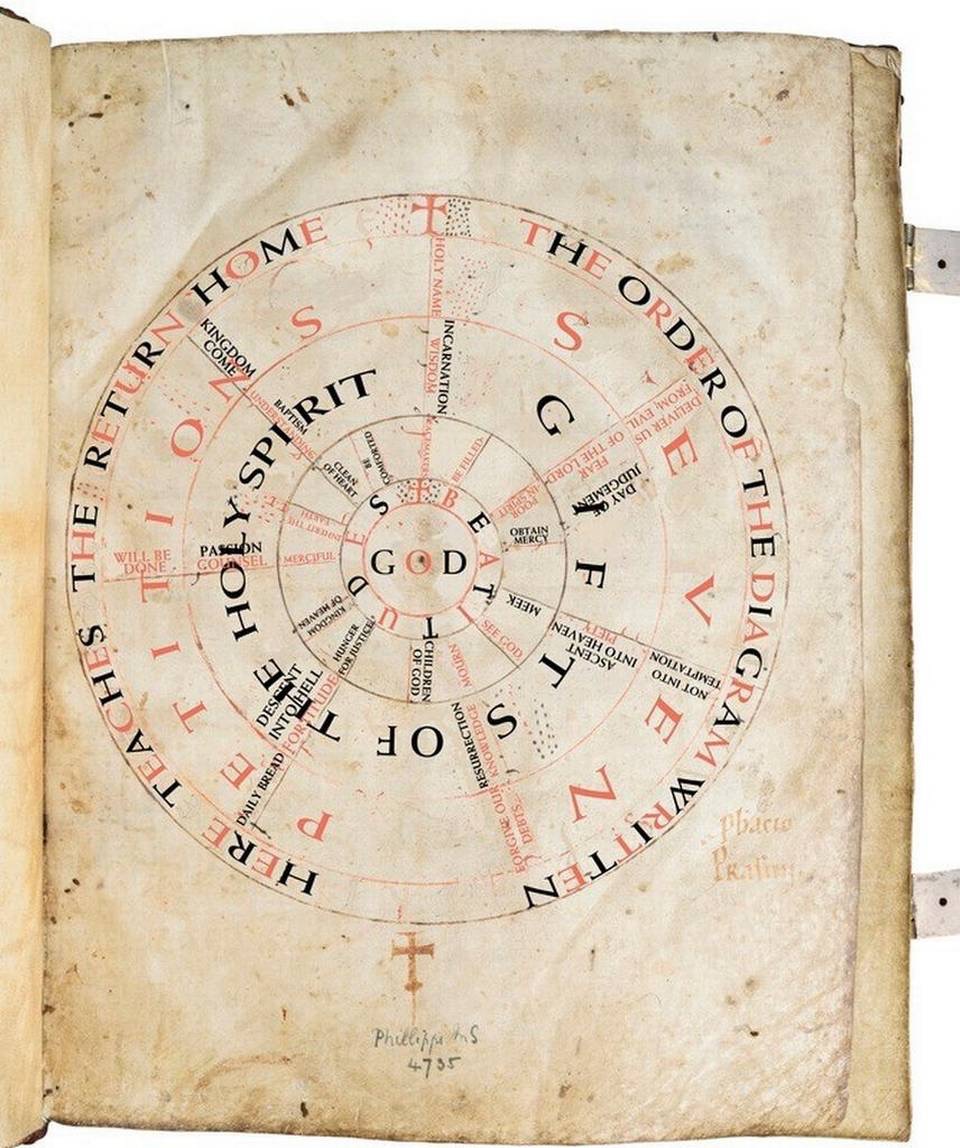 Click on this English translation of the Prayer Wheel to see it enlarged.

Do you remember the headlines about this discovery? Sara Griffiths of The Daily Mail in the UK was among many journalists around the world who reported in 2015 on the mysterious chart, which turned up when a medieval illuminated book of Gospels was placed on the auction block. In the front of that set of Gospels was a strange chart for a kind of spiritual discipline no one could decipher. Here’s how Griffiths breathlessly heralded the discovery:

Presented by an abbess to her convent of nuns, a medieval tome known as the Liesborn Gospel Book is one of the most valuable gospels in the planet. … Now, one has revealed an extra hidden treasure—a mysterious hand-drawn prayer wheel inside. But despite the unusual find, it is not known how to use the enigmatic diagram. The book, containing just the Gospels of Matthew, Mark, Luke and John, has a cover made of carved oak with copper clasps. … The mysterious prayer wheel was likely added to the book’s blank first page in the 12th century. … Written in Latin and arranged in concentric circles, the prayer wheel’s outermost ring contains instructions, which when translated from medieval Latin read: ‘The order of the diagram written here teaches the return home.'”

So, do you understand the enthusiastic references to Indiana Jones and Middle Earth? They’re not hyperbole. This was the invitation to a real spiritual quest. In 2015, the big question was: How had Christians used this encoded wheel a millennium ago?

At the center of the wheel was Deus, Latin for God. The four concentric bands, when translated, contained text concerning: the Lord’s Prayer, the Gifts of the Holy Spirit, events in from the life of Christ and Jesus’s Beatitudes.

A trio of brave souls set out on the quest to uncover the mystic meaning of this chart: Patton Dodd, a veteran religion editor who has appeared in the pages of The Atlantic and on National Public Radio’s On Faith; Jana Riess, senior columnist for Religion News Service and a well-known author and editor of books; and David Van Biema, best known as Time magazine’s religion writer for a decade until 2009 and now a popular freelancer for various major magazines.

Their biggest discovery on their lengthy global quest? This chart was not the one-off creation of a single quirky monk or nun. The trio found about 70 surviving examples of Prayer Wheels in libraries and archives circling the globe. In fact, all those centuries ago, these circular prayer charts were a popular practice among many Christian communities! Lauren Winner is right: This is a discovery on par with the resurfacing of Christian labyrinths after having been forgotten for centuries.

‘A BRIDGE BETWEEN OLD AND NEW’ 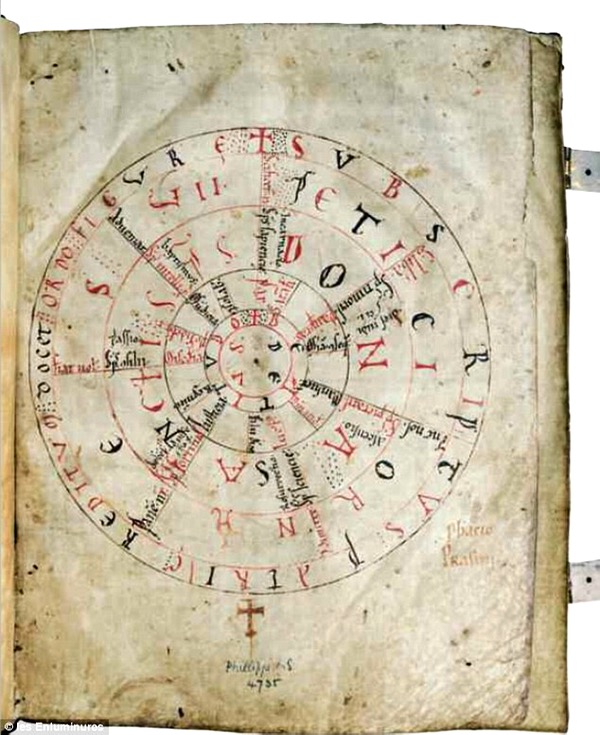 The original Latin chart in the Liesborn Gospels. (Click this image to see it larger.)

“When the three of us decided to explore the Prayer Wheel, we were able to get the rights to use the image of the wheel from the people selling the book. I think they felt our work might draw attention and increase interest in these Gospels,” said Jana Riess in an interview. “Now, after the sale, the book has returned to German to the monastery where it came from in the first place.”

The museum of Liesborn Abbey is situated in the German state of North Rhine-Westphalia. The Gospels left the monastery, when the community of Benedictine nuns closed in 1803. The treasure then changed hands at least 10 times, hopping around the globe, before it was placed on the auction block. Then, the Liesborn Abbey Museum put together a plan to buy back the Gospels for about 3 million Euros.

“Our book begins with a short introduction to the discovery of this Liesborn Prayer Wheel,” explained Jana. “But our book is not a detailed history either of Liesborn or of this particular Prayer Wheel. We do explain the history, but that wasn’t our purpose. Our book is a guide to using the Prayer Wheel on a daily basis if readers want to rediscover this practice.”

If you are a reader with a long-time interest in spiritual disciplines, you will recognize this book is an instant classic—akin to the 1995 release of Walking a Sacred Path: Rediscovering the Labyrinth as a Spiritual Pratice by Lauren Artress. Now, there are many books about labyrinths, but Artress’s guide launched the worldwide movement of reclaiming that practice and continues to find new readers every day.

In The Prayer Wheel, the authors emphasize: “The wheel’s paths are not magic, and praying them is not an incantation. Think of it rather as a spiritual best practice.”

Then, the authors also stress the timeliness of this discovery:

“The wheel could have resurfaced at any time, but it is especially welcome today. It offers prayer prompts boiled down to their most succinct essentials—telegraphic words and phrases that contain multitudes of meaning. In an age when we are shifting from communicating in sentences, paragraphs and chapters to expressing ideas in a flow of word bites and visual graphics, the wheel offers a bridge between old and new—without compromising substance. Think of it as an early Christian handheld device, one that is improbably suited to our time.”

The heart of the book is 180 pages describing what the authors call Seven Paths through the Prayer Wheel. These page-by-page spiritual reflections are organized so that readers can focus on one path per week for seven weeks. That makes the book a terrific idea for small-group discussion in your congregation—especially if your small group is focused on prayer and spiritual formation. Invite people to try these prayer prompts, these pathways to prayer, and you’ll enjoy discussing whether this leads to fresh spiritual insights.

Each of the seven weeks draws on a phrase from the Lord’s Prayer.

“That prayer, which most people know as the Lord’s Prayer, is the gateway to understanding the wheel,” Jana said in our interview. “Each spoke of this wheel, each pathway to prayer, begins with a petition from the Lord’s Prayer. The genius of this comes from St. Augustine who began making these connections between each petition in the Lord’s Prayer and a particular Beatitude and a scene from the life of Christ. The juxtapositions of those familiar elements are what makes the Prayer Wheel so fresh—so rich and rewarding.”

There can be connections between the Prayer Wheel and the Labyrinth, says Jana. “Both have this circular movement to them and people familiar with the labyrinth know that there also are finger labyrinths you can follow with a stylus or your finger. A medieval scholar points out that there are smudges on the original Latin document from Liesborn that indicate someone was using a finger to keep track of where they were on the Prayer Wheel. I’m a fan of the labyrinth and I like the physical contact—to trace my finger along the paths. And, I think that influenced how I approached the wheel.”

Thanks to Jana Riess and her co-authors, we now know that Prayer Wheels can be found in many libraries and archives around the world. In fact, some Prayer Wheels are even more elaborate than the Liesborn chart. In coming years, versions of this circular approach to spiritual discipline may pop up in exhibitions or in freshly re-imagined versions of the Wheel.

However, if any of our readers are planning European journeys, the Liesborn museum is eager to welcome visitors. Check out this Liesborn web page for more details. (Note: If the website pops up first in German on your computer, click on the “Options” in the upper-right-hand corner and select the English translation. Note that this is an auto-translation and the wording is awkward—but you can understand the articles on that page and the photos are intriguing.)

“One thing that drew me to the Prayer Wheel is that it is deeply ecumenical. The references on the wheel are all to biblical texts, not doctrines that Protestants might be concerned about today. The innovation here is putting these particular biblical texts together in fascinating ways,” said Jana. “I remember I had chills when I first encountered it and I continue to love the Prayer Wheel because of all the juxtapositions that invite us to reflect. And, using this as a guide, we know it’s biblical, it’s theology, it’s history, it’s prayer—all in one.”

“The moment I first encountered the Prayer Wheel felt like: Where have you been all my life?” Jana said. “This practice gives us a deeply moving connection to God but also a connection deep into our Christian past.”