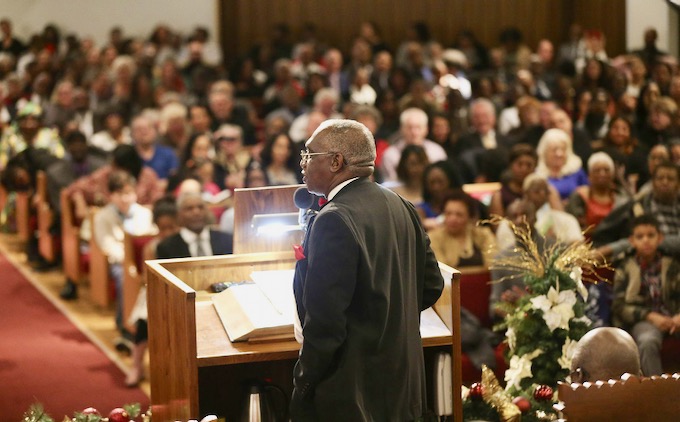 This photo of the Rev. Dr. France A Davis, pastor emeritus of Utah’s largest African American church, Calvary Baptist, appears at the top of his online biography within the Calvary church’s website. To learn more about Dr. Davis’s remarkable life, click on this photo to visit the church’s online biography of him.

EDITOR’S NOTE—Dr. Martin Luther King Jr.’s legacy is global, so this week, veteran Italian journalist Elisa Di Benedetto writes about her experiences with Dr. King’s ally and a long-time civil rights advocate in Utah: the Rev. Dr. France A. Davis. As she explains in this story, Elisa visited Utah for the first-ever North American conference of the International Association of Religion Journalists. The primary event organizer was Pulitzer-prize-winning Salt Lake Tribune religion writer Peggy Fletcher Stack. At the conference, journalists from around the world heard a stirring talk by Dr. Davis, then not long after the conference, Peggy wrote an in-depth profile to mark the retirement of Dr. Davis, headlined: Utah civil rights legend France Davis retires from the pulpit after 46 years, but his life remains a sermon in service. Here at ReadTheSpirit magazine, we are thankful that Peggy brought Dr. Davis’ prophetic voice to a wider attention—and that Elisa wrote this column for the holiday honoring Dr. King.
.

The Dream Is Still a Dream 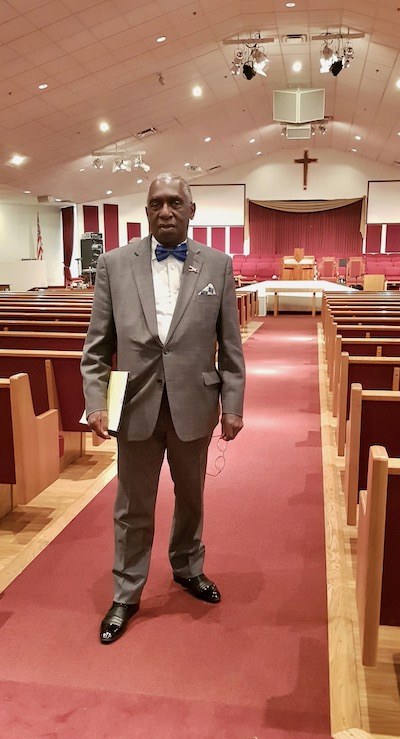 “If the dream is that everybody would be treated the same—it’s still unfulfilled. It is still a dream.” Those are the words of the Rev. Dr. France A. Davis, who recently challenged journalists around the world to continue to report on efforts to combat injustice.

Even though I live in Italy, I have been thinking about Dr. Davis’s prophetic message to us as we approach the American holiday commemorating Dr. Martin Luther King Jr.’s legacy. Not only did I hear him address our conference, I also visited his Calvary Baptist Church, Utah’s largest predominantly black congregation, where he has served since 1974, before retiring from active pastoral ministry on December 29.

I asked him how he assesses the progress since Dr. King was alive.

“Some pieces perhaps have been realized, like Mr. Obama getting elected to the presidency of the USA. But, other than those pieces, there is still a lot of work left to be done to ensure that everybody is treated the same,” he said, with a little bitterness in his eyes. “That’s what I see his dream is: that everybody would be treated with fairness and justice and have worth and value.”

I met Dr. Davis on a sunny Sunday morning, last October. It was my first time in Salt Lake City. I travelled there from Italy to attend the first North American conference of the International Association of Religion Journalists on “Cultivating, Understanding, Accuracy, and Empathy in a Polarized World.” It was a great meeting with journalists from different regions in the world discussing the challenges we face as we report about the important role religion plays in daily life. The intense 2-day program included keynote addresses from representatives of the local religious majority, The Church of Jesus Christ of Latter Saints, and the minority, the Calvary Baptist Church.

Dr. Davis shared the history of his church and the challenges of being a religious minority in “the Mormons’ land.” As he ended his powerful speech, I wanted to visit the Calvary Baptist Church and attend the Sunday morning worship service there. I walked to the church along a main access street into downtown, which was renamed Martin Luther King Jr Boulevard in 1993, thanks to Rev. Davis’s advocacy and the community’s efforts, after a long and debated negotiation.

Dr. Davis’s life has been tightly connected to Dr. King, since the marches during the 1960s, which would raise support for the Civil Rights Act of 1964 and led to the voting Rights Act of 1965. “I was there for the march in Washington in 1963, and in 1965 in the march from Selma to Montgomery, Alabama. A part of my work here has been connected to that, and I’ve become the person who many people turn to when they get injustices here in Salt Lake City.”

That advocacy work resulted in the vandalism of Dr. Davis’ office by gunfire—one of the dramatic moments in his life included in my colleague Peggy Fletcher Stack’s Tribune profile of him at the time of his retirement.

Working from my home base in Italy, I am a journalist who specializes in covering religion as well as issues involving migrants around the world. I also have served as a volunteer working with migrants from sub-Saharan Africa. I see first-hand the challenges of racial, cultural and religious minorities in Europe. I was fascinated to learn about these challenges from a veteran of the American civil rights movement.

“The first challenge has been that the traditional racial issues that the U.S. has had are alive and well here,” he said, recalling examples that included hate letters he received from somebody purporting to belong to the KKK, people beaten up because of their race and name-calling.

“We feel like we are the left out, the least and the last,” he said. “But in addition to that, we are a religious minority and so we have to work hard to be accepted and seen as a viable religious group.”

THE IMPORTANCE OF DIALOGUE

Dialogue and good relationships with other faiths and religions, especially with the LDS Church leaders, have made that possible, he said.

“We work together with all kinds of religious groups, but we agreed to disagree in terms of the theological positions,” he explained. Religious leaders have crossed denominational lines to work on issues including fair-housing laws. In her profile of Dr. Davis, Peggy described how he was barred, because of his race, from the first apartment he tried to rent when he first arrived in Salt Lake City in 1972.

I asked Dr. Davis: So, how were these interfaith relationships established to work on hot-button issues like housing or access to health care?

His answer: “We just agreed not to debate about, discuss or talk about the theological differences—and to work together on the areas we have in common: housing, food, the hungry, the homeless and other social issues like that.”

His congregation provides many services to the community: a housing complex for the elderly and physically disabled; educational opportunities, including preschool reading programs, tutoring and scholarships for college students; recreational programs “so that people can develop mentally and physically”; food and other urgently needed resources for at-risk families.

As I stepped into the church that Sunday morning, I immediately experienced how inclusive and active the community is and how every single room in the building is designed to fulfill the needs of a growing community that counts 700 to 800 members from all over the state. They welcome 10 to 12 new members every month. Among them, there are also refugees from Congo, Sudan and other countries, who can attend a service in Swahili language for them, every Sunday at 2 pm.

On January 1, 2020, Reverend Dr. Oscar T. Moses began his pastoral leadership of the Calvary Baptist Church, which celebrated its 127th anniversary last November. Meeting the Rev. Dr. France Davis and his wife Willene Davis, who supported him over the plus 45 years of full-time service pastor, was one of the most enriching experiences of my trip to the US.

In 2020, Dr. King’s vision might still be a dream, but the world badly needs to hold up such dreams, every day—wherever we live and work.

A Diversity Note for Readers

Front Edge Publishing, founded in 2007, is the media company that produces weekly issues of ReadTheSpirit magazine. Front Edge has published many books about religious, cultural and racial diversity, including Dr. David Gushee’s Changing Our Mind. In 2020, our Front Edge team is producing a series of translations of that influential book about inclusion to share Dr. Gushee’s inspiring message with communities around the world. First, a Mandarin-Chinese version will be published, then a Swahili-language version. Keep in touch with us via [email protected]