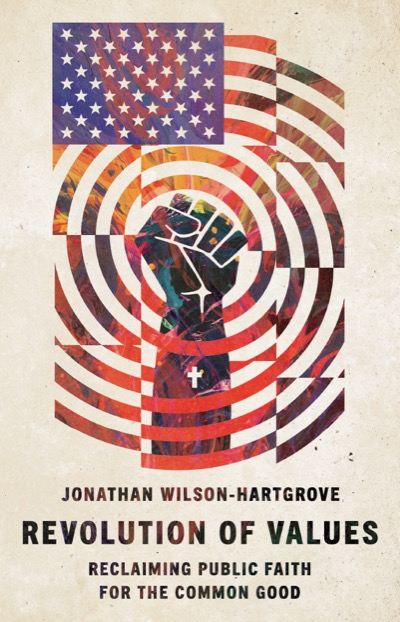 Millions of Christians—especially black Christians and mainliners who care about at-risk families—already have seen evils in Donald Trump’s policies and moral lapses. However, millions of evangelical Christians remain in lock-step obedience to those outspoken evangelical leaders who are misusing the Bible in support of Donald Trump.

That’s the powerful indictment that evangelical writer and activist Jonathan Wilson-Hartgrove lays at the feet of leading evangelical spokesmen in Revolution of Values—Reclaiming Public Faith for the Common Good, a book published to coincide with the 2020 election year. This is very much like the historic decision by Dr. David Gushee to write his book Changing Our Mind to present the evangelical case for LGBT inclusion.

In Revolution of Values, Wilson-Hartgrove argues that evangelicals won’t be swayed to break with Donald Trump until a strong evangelical case is made in terms they can understand and accept. That’s the model Gushee followed in his book. And, that’s what Wilson-Hartgrove delivers in this detailed analysis of how many outspoken evangelical leaders have led their followers astray, including what he describes as deliberate misuse of the Bible to support Trump.

“I’m not claiming that the Bible lines people up with any political party but the distortion that has been created by the Religious Right over the last 40 years has been crippling to so many Christians,” Wilson-Hartgrove said in our interview this week. “Evangelical Christians are not going to change their mind about this unless we turn back to the Bible and open up a biblically based space to talk about what has happened.”

Those conversations simply are not happening in many churches, he said. “I’ve had conversations with Christians all across this country that have convinced me of this: Many evangelical Christians already are deeply troubled by Donald Trump’s presidency. They’re troubled by his actions at the border, by his profanity, by his actions that could land us in a world war, by other policies. If they have a chance to talk with other Christians who allow them to openly share their concerns, then they will make a change. But, if they’re surrounded and dominated by these strong evangelical leaders who are supporting Trump—they will tend to remain obedient, to tamp down their troubled spirits, remain quiet and continue to vote for Trump.”

A HISTORIC CHALLENGE FOR EVANGELICALS 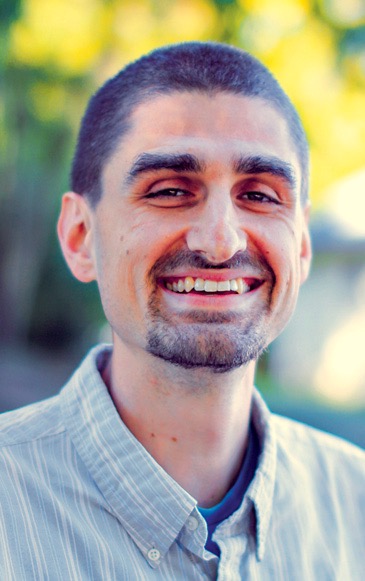 This new book is a potential game-changer in evangelical America, much like Mark Galli set off a political earthquake under the Trump administration by calling for Trump’s removal in a December editorial in Christianity Today. Judged by the magazine’s modest circulation of just 130,000, that editorial might have remained a mere blip on the political landscape. However, Christianity Today was founded in 1956 by Billy Graham himself and is the flagship of the evangelical movement. Suddenly, Galli’s little editorial was front-page news nationwide. Trump was so worried about the editorial that Graham’s son, Franklin Graham—one of the leaders Wilson-Hartgrove indicts for making a pact with Trump—quickly stepped in to condemn what Galli had written.

“I was grateful for Mark’s editorial in Christianity Today,” Wilson-Hartgrove said. “It doesn’t change everything with one editorial, but Mark did speak out and he gave white evangelicals some opening to speak out and begin saying: Something is wrong here with our support of Trump.”

Wilson-Hartgrove’s book also was published in December and, so far, it has flown under the radar of national news media, because the book’s message is not easy to spot online. That’s apparently part of this book’s marketing plan, at least so far. The book’s message is so explosive that Wilson-Hartgrove’s publisher—the venerable evangelical publishing house Inter-Varsity Press (IVP)—downplays the book’s content on its Amazon page. There’s no mention of Donald Trump, who is a central focus of this book, in the main description of the book that IVP provides to Amazon.

Instead, the book’s subversive message shows up in endorsements. For example, a full-color, four-page press release IVP has prepared to promote the book mentions Donald Trump in the middle of the third page. That’s where IVP placed Brian McLaren’s loud-and-clear description of this book:

“Are you one of the 81 percent of evangelicals who voted for Donald Trump in 2016, thinking you were making the Christian and biblical choice, or one of the mainline Protestants or Roman Catholics who joined them? Are you having some second thoughts? Here’s the story of a young evangelical (Wilson-Hartgrove) who rethought his decision to be a foot soldier in the Religious Right and is now a leader in a revolution of values that you may want to join too.”

THE CASE AGAINST THE EVANGELICAL RIGHT

Wilson-Hartgrove builds his case across 200 pages, starting with Page 1: “Since the late 1970s in America, political operatives have invested money and energy in framing the cultural concerns of conservative white christians as the moral issues in our public life.”

He contrasts the rise of the Right against the core values in the heyday of the civil rights movement, when Dr. Martin Luther King Jr. was still alive, which Wilson-Hartgrove lists as: “voting rights, equal protection under the law, economic justice, peace and the environment.” By the time Wilson-Hartgrove was growing up in the South in the 1980s and ’90s, King’s fervent Christian appeals to justice were eclipsed by conservative political movements with names like Moral Majority and Christian Coalition.

Within his own Southern Baptist Church, “I was trained as a foot soldier in the culture wars. I was taught to vilify liberals, environmentalists, and civil and women’s rights advocates, not as a strategy to gain political power, but as a religious duty,” he writes. What finally opened Wilson-Hartgrove’s eyes to the evils of “the genocidal white supremacy and patriarchy that have compromised Christian witness throughout US history” was spending a great deal of time with poor and at-risk families.

That’s literally what Jesus asks his followers to do—repeatedly—in the pages of the Bible. That’s what transformed Wilson-Hartgrove’s view of the world—and the core values of Christianity.

PEW RESEARCH: AMERICANS SIDE WITH THE PEOPLE

In addition to his role as an outspoken theologian and social-justice activist, Wilson-Hartgrove also is a historian steeped in America’s religious history. He understands what Dr. King demonstrated in the 1960s: Americans will change their minds when they see the faces of their neighbors at the heart of an issue. That’s the same foundation on which Dr. Gushee built his work on LGBT inclusion, the story he tells in Changing Our Mind.

That’s also the core message of a widely cited Pew Research Center report this week, headlined: Mixed views about civil rights but support for Selma demonstrators. This is an analysis of polling data written in 2015 by the late Pew Research co-founder Andy Kohut.

What the data show is that, as the marches were underway in Selma, Americans still were very hesitant about supporting civil rights. Kohut writes:

But despite all these reservations, views about what occurred in Selma were another matter. By a 48% to 21% margin, a Harris poll in May 1965 found its respondents saying they sided more with the civil rights groups involved than with the state of Alabama. Not unexpectedly, virtually all of the black respondents sided more with the demonstrators (95%), but the balance of opinion among whites was also clearly with them rather than with the state of Alabama (46% to 21%).

That’s why every chapter in Wilson-Hartgrove’s book includes inspiring stories about his experiences shoulder-to-shoulder with poor and at-risk men, women and families. Are evangelicals ready to abandon Trump? Polls show that evangelicals have deep reservations about voting for anyone else in 2020. What could change their minds?

The stories of real men, women and children who are affected by Trump’s policies. 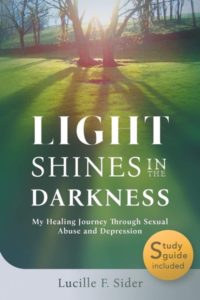 One of the other main groups he recommends to readers is Evangelicals for Social Action, founded by Ron Sider. Ron is the sister of clinical psychologist and clergywoman Lucille F. Sider, who added their Sider family story to the #MeToo movement in 2019 by publishing Light Shines in the Darkness: My Healing Journey Through Sexual Abuse and Depression. This is Lucille’s story of resilience and hope as a survivor of sexual abuse. Ron has fully supported his sister’s efforts to speak out openly and honestly about the toxic environment in which they grew up.

A NOSTALGIA FOR WHITE NATIONALISM

In stark contrast to these groups that lift up the concerns of at-risk and marginalized men, women and children—Wilson-Hartgrove builds his central indictment through page after page of quotes from top evangelical leaders calling Donald Trump the answer to their prayers.

These “court evangelicals” have no interest in justice, diversity, inclusion or the wellbeing of the poor, Wilson-Hartgrove argues. Instead, they share a nostalgia for a male-dominated white nationalism that champions unrestrained capitalism, he writes.

For Christians who are tempted to believe that “rich people are godly and poor people are morally suspect, then the Bible’s complex collection of multiple genres of literature can be distilled into basic instructions for climbing the ladder of success in a capitalist society—as long as you don’t pay too close attention to the details.”

Just as 19th-century Southern Christian pastors preached that slavery was morally mandated by the Bible, modern white nationalists cherry pick verses that have built a Christian mandate to support Trump. Now, several years into the Trump regime, Wilson-Hartgrove writes, “The moral crisis of the Trump administration has revealed the danger of false teachers who misuse the Bible and twist its words to whitewash injustice.”

‘REVIVING THE HEART OF AMERICAN DEMOCRACY’

So, is this situation hopeless? The author answers with a resounding: No.

Change can come, as Dr. King preached, “in a revolution of values that would necessarily be led by America’s poor, coming together across dividing lines that have been used to pit us against one another.”

On the book’s final page, Wilson-Hartgrove preaches this message as an opportunity to tap deep into the wellspring of our American and our Christian origins. He writes:

“Without Christian nationalism, there would be no President Trump. However extreme religious nationalists may seem to our neighbors and the watching world, the Republican Party as it is currently constituted cannot exist without them. They are the base that the Religious Right built.

“Within the experiment of multiethnic democracy that we call America, Christian nationalism is the greatest threat to the ‘more perfect union’ that our Constitution calls us to strive toward. In a nation that is increasingly less white and less Christian, the coalition the Religious Right helped to build clings to power by undermining the democratic principles that sustain America’s social contract.  …

“The task of a moral movement is nothing less than reviving the heart of American democracy.