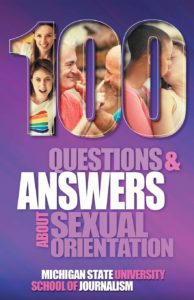 The newest Bias Busters guide is a lesson in how small can be huge.

The guides are small—just 100 questions with answers—but the series has become big: 14 guides in just five years. Several have won awards and they are used by universities, businesses and interfaith groups.

But the really big small thing about our latest book, 100 Questions and Answers About Sexual Orientation, is that it was published by just three students. It usually takes a whole class, as many as 20 people, to publish one guide. The three students on this guide—Caitlin Taylor, Alexis Stark and Rebecca Fadler—were in a class that produced the earlier 100 Questions and Answers About Gender Identity. They decided a companion volume was needed—and they were concerned about the delay in publishing the Sexual Orientation volume if they let that project wait until it fit into our regular School of Journalism course schedule.

So, the three created an independent study project and began work immediately.

The guide answers questions including:
• Are bisexual and pansexual the same?
• Are drag queens and kings gay?
• What is conversion therapy?
• Are people born gay?

WHY THIS MATTERS NOW

Pew Research continues to track our changing attitudes as Americans. The latest report by Pew research analyst Anna Brown shows that nearly two-thirds of Americans now tell pollsters that they believe LGBT people and homosexuality in general should be accepted. That’s a dramatic increase over the past decade. In 2006, only half of Americans told pollsters that they favored acceptance.

As a result, Pew found, millions of people now feel comfortable being open about their sexual orientation. More than 10 million Americans now identify as LGBT—up from 8.3 million as recently as 2012.

Bottom line: American acceptance is growing every year—making more and more LGBT people feel safe in letting others know about their orientation.

HELP FROM OUR ALLIES 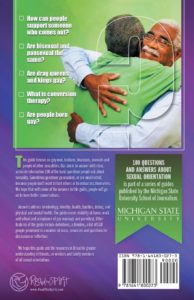 Click the book’s back cover to see it enlarged.

As our MSU teams prepare each guide, we always invite a nationwide array of blue-ribbon advisors to help us ensure accuracy.

Allies for this guide included Dr. David P. Gushee and Susan Horowitz, who wrote introductory essays for the new book. Gushee is Distinguished University Professor of Christian Ethics and Director of the Center for Theology and Public Life at Mercer University. He is the author, co-author, editor or co-editor of 22 books including Changing Our Mind, which has been read by individuals and small groups around the world. Susan Horowitz is editor and publisher of Between The Lines/Pride Source. She founded Pride Publishing, Inc., a graphic arts and publishing company and the publisher of the New York City Pride Guide from 1983 to 1999.

The three student authors echoed the actions of another small group of Michigan State students who advocated for tolerance of gay people almost 50 years ago. In the fall of 1971, they asked the East Lansing City Council for an ordinance banning discrimination in hiring. The following March it passed, 3-2.

You can use these small guides, whether they are about gender identity or sexual orientation or race, ethnicity or culture, to make a big difference, too.

We’d like to suggest that you make a New Year’s resolution to read at least a couple of our MSU guides. You can find them indexed on Amazon and on the Front Edge Publishing website. This effort takes little time. By getting clear, accurate answers to our questions about each other, we can start conversations with neighbors, co-workers or new relatives we wanted to have but were reluctant to try. Perhaps we didn’t want to ask questions that might be harmful. Maybe we felt these were things people just expect us to know.

Now, you can those little conversations. And that is really big!

Joe Grimm is editor of the Bias Busters series and visiting editor in residence in the Michigan State University School of Journalism.